Trump's Arpaio pardon sends a clear signal to racist, brutal cops: I've got your back

Trump wanted to rally his base and test-drive his pardon powers. But the message to cops couldn't be clearer 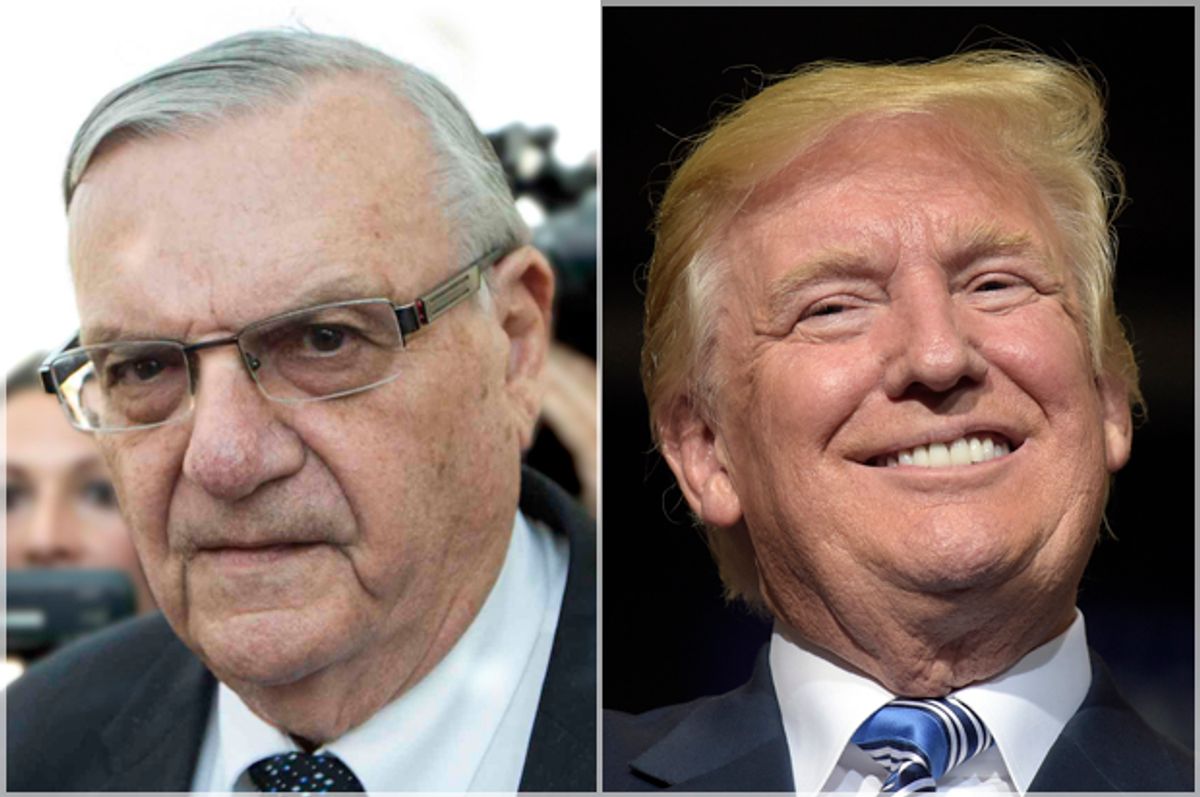 If there is one person who could be said to be Donald Trump's political soulmate, it would be former Sheriff Joe Arpaio of Maricopa County, Arizona. They bonded over a very special issue: birtherism. Back in 2011, Trump was considering a run for president against Barack Obama and had his minion Sam Nunberg immerse himself in fringe right-wing media for months to get a feel for the lay of the land.

He found that a large part of the GOP base was convinced that Barack Obama was a secret Muslim who had not been born in the United States and was therefore ineligible to be president. Trump knew he'd found a winning issue in demanding the "long form birth certificate," and for a time he was even tied for first place in early polling for the 2012 GOP nomination.

President Obama released the form and then humiliated Trump to his face at the White House Correspondents' Dinner, so Trump set his White House plans aside until 2016. But the birther issue didn't die. It was taken up by Arpaio, well-known as a sadistic lawman who made prisoners parade around in pink underwear in 120-degree desert heat, in what he himself called "concentration camps." Arpaio took up the cause and sent out a five-man “cold case posse” to "authenticate" the long form birth certificate.

Donald Trump was very impressed and sent Arpaio a congratulatory note on a printed copy of the AP article announcing the "finding." 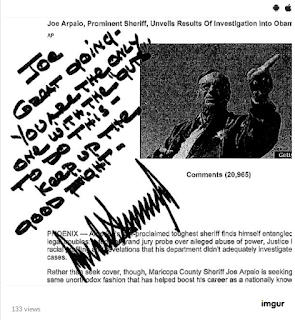 From that point on, the two men were  brothers in arms, sharing a deep bond with white America's racist id.

Sheriff Joe is a pioneer when it comes to Latino-bashing. In fact, his strident enforcement of the "show me your papers" law, even after it was struck down by the federal courts, is what landed him in hot water and got him convicted on a misdemeanor charge of contempt of court, giving Trump the opportunity to issue a pardon for his anti-immigrant, birther soulmate, just seven months into his term.

And what an opportunity it is. Indeed, Trump has got to be thrilled that Arpaio offered him a way to send messages to certain people he desperately needs to keep on board the Trump train.

The first is the base itself, of course. There isn't a lot of evidence that he's losing his followers in any great numbers. But polls suggest his fervent support is fading among the faithful, and that could lead to real erosion if he doesn't nip it in the bud. Trump's base may be a bit uncomfortable with coddling Nazis with torches, but pardoning a brutal, anti-immigrant cop is right in their wheelhouse.

The second reason Trump may have pardoned Arpaio is to give his pardon power a little road test to let people know that he's ready to use it. Recent reporting has special counsel Robert Mueller and congressional investigators homing in on some of Trump's associates in the various Russian counter-espionage and obstruction of justice investigations. He may want to let them know that he has their backs, bigly.

Finally, I think there is an even more important reason for doing this, although I don't know that Trump is even conscious of it. He has always been an authoritarian at heart, going all the way back to his notorious 1989 full-page ad entitled "Bring Back the Death Penalty, Bring Back Our Police." In July of 2016, he gave a speech declaring, "I am the law and order candidate.”

He has also declared that he loves torture and that he would summarily execute prisoners if he could. At one point he said that on his first day in office he would declare that it is mandatory to seek the death penalty for any cop killing, despite the fact that he would have no authority to do so.  He promised over and over again that he was going to let the border patrol, ICE and local police "take the gloves off." As he told Larry King on CNN nearly 30 years ago:

I am strongly in favor of the death penalty. I am also in favor bringing back police forces that can do something instead of turning their back because every quality lawyer that represents people that are trouble, the first thing they do is start shouting police brutality, etc. . . . The problem we have is we don't have any protection for the policeman.

When the Central Park Five were found to be innocent and later received a large settlement from the city, Trump was angry and wrote an op-ed in the Daily News, arguing they had to be guilty: "Speak to the detectives on the case and try listening to the facts. These young men do not exactly have the pasts of angels." He refused to accept the judgment of the courts and instead apparently relied on some police officers who told him the wrongfully convicted young men deserved what they got.

During the presidential campaign, Trump appeared before police groups all over the country, where the rank and file cheered his speeches; many of their unions endorsed him and some even wore his iconic red hats. Not long before Charlottesville, the president made a big speech to the Long Island police and stunned everyone by telling them that they should rough up suspects during arrests. Many police chiefs responded negatively, but the cops in that audience cheered.

Trump didn't just pardon Arpaio to signal the base that he's still the anti-immigrant xenophobe they voted for. He pardoned Arpaio to signal to the police in this country that the "law and order" president thinks it's fine if cops ignore the courts and the law if they believe those things are inhibiting them from doing their jobs.

None of this is to say that he doesn't truly feel a personal bond with Arpaio and wants to spare him a prison sentence, however short it might be. After all, he interfered with the case months ago. But he could have granted clemency, which would have kept the ex-sheriff out of jail. Trump chose to pardon him for a reason: He truly doesn't believe Arpaio did anything wrong by ordering his deputies to practice racial profiling during traffic stops, or by defying a court order to stop doing it. Indeed, Trump wants the police to know this president will back them if they do the same.

When he says "law and order," he means that police are the law and they can keep order by any means necessary. That's the opposite of the rule of law, a concept for which President Trump clearly has no respect.

By the way, USA Today reported on Sunday that Trump intends to lift an Obama-era ban on supplying local police forces with surplus military equipment. What could go wrong?