"We have nowhere to go": Woman stranded on Houston roof gives a live interview during Harvey floods

A mother, along with 30 others, are trapped on a roof in Houston, pleading for help on national television 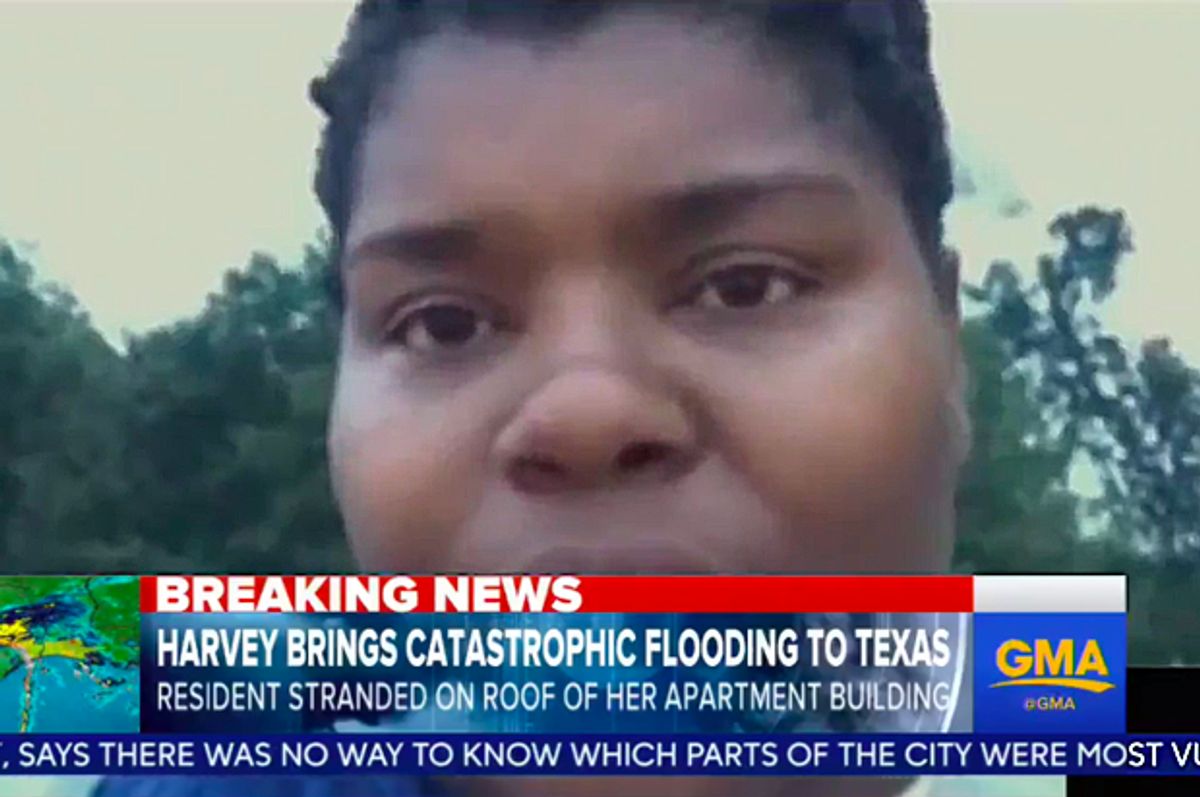 The images coming out of Houston the past 24 hours have shown the dire situation residents are in from the catastrophic flooding. But one segment on Monday's "Good Morning America" truly captured the desperate situation for those stranded on rooftops.

A woman named Aiesha, a 30-something mother who lives in downtown Houston, video-chatted with "GMA" hosts Amy Robach and George Stephanopoulos as she waited for relief on a roof with a couple dozen of individuals.

"It's not going real good," Aiesha said. "There is water everywhere and we have nowhere to go."

The woman said she had her children accounted for but that she lost all of her material possessions. "We just have clothes on our back," she said.

Even though they found high ground for the moment, the water is still rising, and the Houston area is still expecting rain for the next couple of days.

"The water is moving fast and it is coming up real, real fast," Aiesha said. "The water started coming in yesterday. We tried to leave, but there was nowhere to go. We had to break a window to get outside on the roof."

The woman said that she has contacted law enforcement, but she does not have a timetable as to when she should be expecting aide.

"I've been on Facebook. I have been calling every number people are sending me," she said.

Near the end of the segment, Aisha said that water was "starting to come in from the back" onto the roof.

The hosts of "GMA" said that they were contacting the United States Coast Guard to provide them Aisha's address so they she can be rescued.

While the Houston Fire Department has responded to over 2,000 emergency calls the past two days, thousands are still awaiting response. Private citizens with boats have descended into southeastern Texas to help with the rescue efforts.

It's an emotional time for Texans, as many are still trying to determine that their loved ones are safe. Members of the press have been instrumental in helping out those in need and connecting lost ones with families.