Pardoning racist "Sheriff Joe" will backfire eventually. But if it pisses off liberals, the Trumpers are stoked 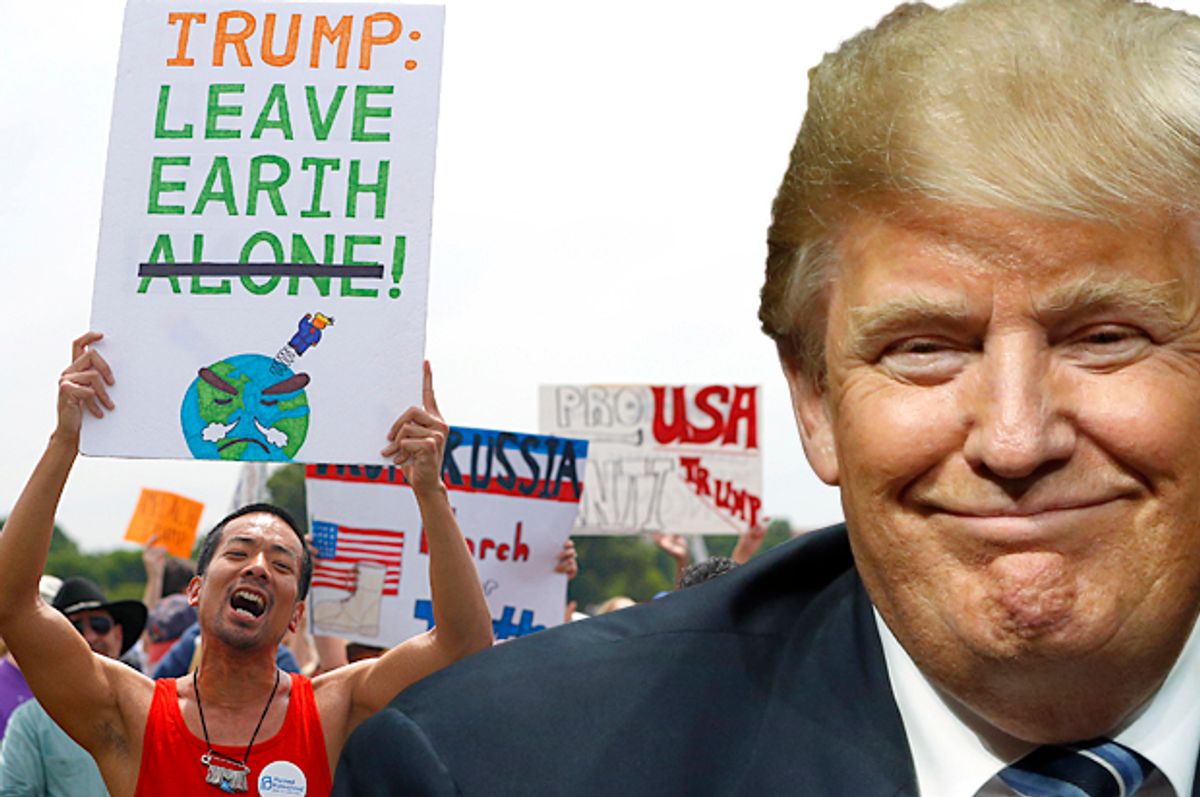 It ought to make perfect sense now. For several years, I’ve been comparing Donald Trump’s online behavior to that of an online comment-section troll, or, more specifically, a Twitter troll who’s managed to build a political movement around the concept of deliberately jabbing political opponents simply to watch them freak out. But now, after 221 days of the catastrophic Trump presidency, it should be abundantly obvious that he’s setting policy and making decisions based exclusively on trolling both Democrats and “Never Trump” Republicans.

After all, a significant chunk of Trump’s reputation is wrapped up in his obnoxious Twitter habit -- a habit that seems to be partly inspired by the tone and content of “Fox & Friends,” mixed with his desperate need for constant attention. Just about everything he does is geared toward fluffing his rally supporters, including the tormenting of liberals. For example, his desire to repeal and replace the Affordable Care Act wasn’t about constructing a better health care system; it was about crapping all over the legacy of his predecessor, Barack Obama, and especially Obama’s supporters. It was about revenge. And his people don’t seem to care that their health coverage would’ve been among the first to be rescinded if one of Trump’s many replacement bills had passed. They didn’t care because Trump’s obsession with repealing Obamacare pissed off liberals.

While there have been many other examples of Trump’s trolling beyond the confines of social media, the most recent example has been the pardoning of racist and convicted criminal Joe Arpaio, the disgraced former sheriff of Maricopa County, Arizona. The close proximity between Trump’s horrendous comments about the Nazi terrorist attack in Charlottesville and the pardoning of Arpaio isn’t mere coincidence. I’d wager that Trump made the decision to pardon the controversial Phoenix sheriff as payback against his political opponents for criticizing Trump’s remarks in which he appeared to sympathize with the white supremacists, KKK members and neo-Nazis who gathered in Charlottesville.

We already know that Trump was furious about the response to his response, to the chaos in Charlottesville. We also know that Trump’s response has damaged his poll numbers and seemed to amplify discussions about his precarious mental health and the possibility of impeachment. Pardoning Arpaio sounds like a great big “screw you” to critics of his three ill-fated attempts at public remarks about Charlottesville, and saving Arpaio from a prison sentence was his way of punishing the opposition by running to the rescue of a notorious birther and anti-immigration racist. And we know that Trumpers love to stir up what they call “liberal tears.”

The main reason for President Trump to pardon Sheriff Joe was fuck you, leftists.
The new rules, bitches.😎

So, there are apparently “new rules” for American politics among Trump supporters, allowing the president complete latitude to govern based on whether it’ll precipitate outrage among the left. Cheering for piss-ant, Batman-villain tactics, as Schlichter, Cardillo and others have, only serves to confirm the president's moral bankruptcy.

It’s the ultimate manifestation of his entire political character: a thin-skinned King Joffrey, a schoolyard bully handing down decisions based on nothing deeper than his pathological obsession with disruption and his ham-fisted attempts at revenge against perceived enemies. Historically, however, it’s a recipe for disaster -- an administration built upon a wafer-thin tactic that’s destined to collapse, given how it can be easily flummoxed using Bugs Bunny’s “Rabbit season! Duck season!” switcheroo.

Not only does this tactic abdicate policy-based, issue-based, morality-based decisions to perceived grownups outside the Trumposphere, but it makes the president ever easier to manipulate into making ever worse decisions. Trump knows nothing about policy, and we know exactly how he’ll react from event to event. These are two potentially fatal weaknesses that together manifest a huge advantage for Democrats and Never Trumpers, revealing Trump’s every move long before he makes it. Consequently, he’s much easier to goad into a corner to be swiftly checkmated.

Perhaps this is why nearly every choice Trump has made has been wrong, ending in disaster for the White House. Whether it’s his inexplicable and self-defeating approach to obstructing the Trump-Russia investigation or his ongoing staffing disasters, the list of Trump successes are, charitably speaking, minuscule. He simply doesn’t consider the potential of any situation beyond the reaction of his enemies and how he can electrify his rally-going disciples.

Sure, pardoning Joe Arpaio might put lead in the pencils of loyalists like Schlichter and Cardillo, but it will ultimately backfire on Trump. It further augments the growing sentiment that he’s either a genuine white supremacist or a fellow traveler and that his heretofore undiagnosed mental issues might make him ineligible to continue serving.

Making decisions based on whether they will trigger “liberal tears” is nothing more than political road rage, ignoring everything else on the freeway including the oncoming tractor-trailer with the name “Mueller” printed on the side. Rewinding back to the attempt to repeal Obamacare, for example, Trump’s approach on this front has only managed to isolate him from his former Republican allies on the Hill, including the Senate majority leader, while utterly burying the repeal-and-replace process, likely forever. Pursuing a policy based on scolding Obama supporters turned out horribly for Trump. Frankly, I’m not sure why Schlichter and the others are so stoked about this tactic, given how Trump has botched, bungled and failed virtually everything he has touched.

Then again, if trolling the anti-Trump coalition is the entire point of supporting the president -- and it seems more and more like it is -- then fine. If the full extent of the Trump presidential legacy is nothing more than being the nation’s first troll president, I can live with that, especially if it continues to sabotage the GOP’s legislative priorities as well as significantly roadblocking Trump’s longevity as chief executive.

Trump supporter Rush Limbaugh once observed, “Trump is an internet troll,” adding, “American politics is determined by trolls on the internet today.” Weirdly -- and sadly -- Rush was right.