Disaster in Houston: A perfect example of the way racism hurts white people too 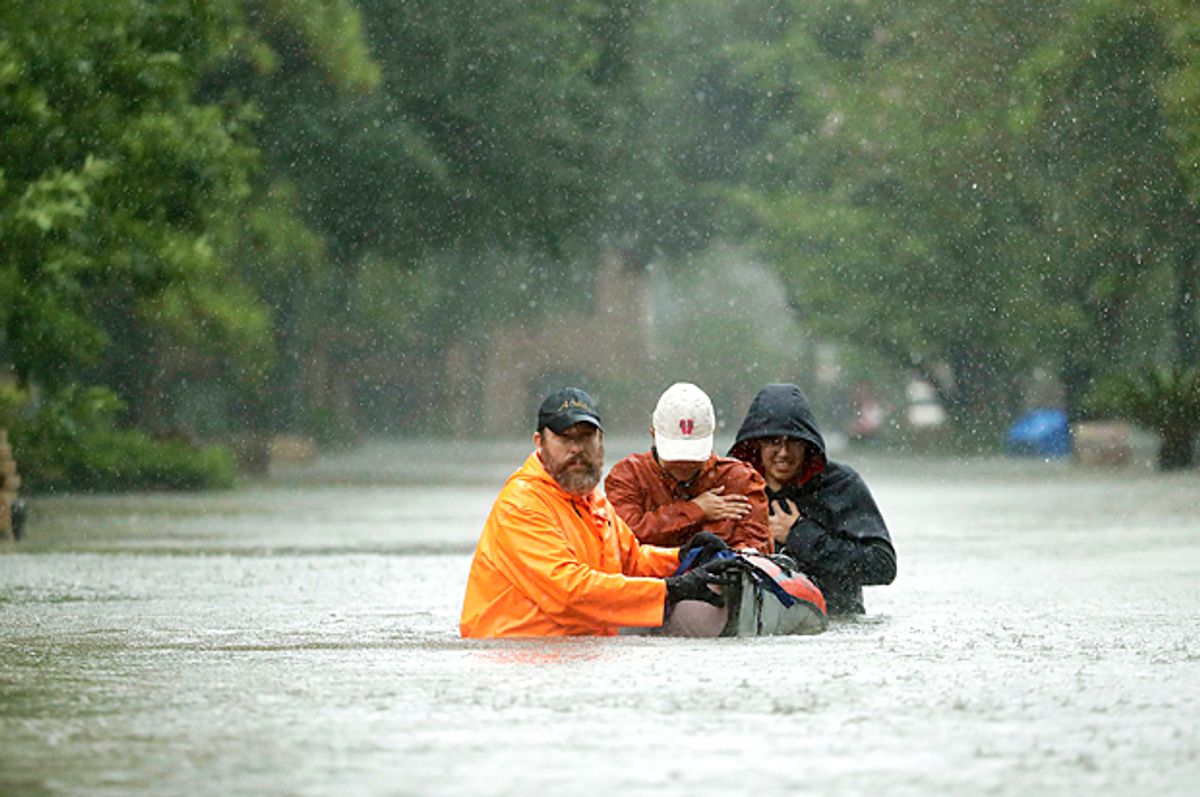 The flooding of Houston and its surrounding areas caused by Hurricane Harvey is a blockbuster disaster movie made real. This is a human tragedy of epic proportions.

The flooding of Houston and its surrounding areas is also a reminder of how white racism hurts white people too.

In a time of national crisis, the United States looks to the president for leadership. His or her behavior should be an example for us all and should serve as a beacon to guide the American people through their travails.

Instead, America is led by Donald Trump. He is manifestly unqualified to be president. In almost comical fashion, Trump played on Twitter and engaged in ego aggrandizement and braggery while Houston flooded. Nero had a fiddle. Trump has a phone.

After seven months in office, Trump has not fully staffed FEMA and other essential parts of the federal government tasked with disaster relief and monitoring the weather. In the positions he has filled, Trump and his minions have largely chosen political hacks and operatives whose only distinguishing quality is their loyalty to him.

Trump has also offered aid, comfort and cover to neo-Nazis and other white supremacists. In my view, he should be seen as a usurper whose rule is illegitimate because of the Russia scandal, whose full dimensions we may never know. This has compromised Trump's ability to lead the country with any degree of effectiveness. In an almost unprecedented fashion, America's senior leadership in the military and the State Department have all but publicly denounced Donald Trump's recent behavior.

As numerous public opinion polls, focus groups and other research have demonstrated, Donald Trump was propelled into office by a wave of white racism and general hostility to people of color. In sum, a white-privilege temper tantrum by tens of millions of adult human beings is directly responsible for the national emergency of Donald Trump's presidency.

Racism hurts white people in other ways as well.

The Republican Party's efforts to make government so weak that -- to paraphrase right-wing scion Grover Norquist -- "it can be drowned in a bathtub" are also fueled by a belief that the federal government disproportionately gives resources and other "free stuff" to black and brown people. This myth has legitimized an evisceration of the social safety net and more generally has hamstrung the federal government's ability to effectively serve the public.

As in most places across the United States, race and class prejudice combine to cause grave negative impact on the built environment. As was seen during Hurricane Katrina, this can make the effects of genuine natural disasters even more severe. This will almost certainly be true in the aftermath of the horrible flooding in Houston and surrounding communities.

I will confess, as I watch the tragedy unfold in Texas, a part of me wishes that I could ask those Trump supporters and Republican voters who are imperiled by rising flood waters how all that "Make America Great Again" and "America First" stuff is working out for them now.

But I am not that cruel. Schadenfreude toward Trump's "basket of deplorables" can wait. They will get their comeuppance in other ways. There is an important caveat here as well: How a president responds to a natural disaster can impact how voters evaluate his leadership at the polls. Given our extreme polarization, Trump's cult-like appeal and the power of racism -- where somehow, for too many white Americans, this disaster will all be "the black guy's fault" (read: Barack Obama) -- Trump may actually be more popular after Hurricane Harvey than before it.

In "Notes of a Native Son," James Baldwin wrote, “I love America more than any other country in this world, and, exactly for this reason, I insist on the right to criticize her perpetually.” The mindless flag-wavers and "Love It or Leave It" types will never understand Baldwin's insight. That is at it should be; their confusion and anger proves the truth of his words.

Most white Americans will continue to deny that white racism exists in any significant measure, and still less that it does not just impact the lives of black folks and other people of color, but also hurts them too. As history demonstrates, the psychological wages of whiteness all too easily neutralize the capacity for critical thought.

I offer a plea and a demand to white America. I know that many white folks choose not to empathize with their fellow Americans on the other side of the color line, and I am not interested in changing the hearts and minds of White America. That is a Herculean task which white folks need to take on for themselves. Instead, I will appeal to crude self-interest. Donald Trump is a disaster, much worse and more enduring than this hurricane. Abandon him. Save yourselves. This sick experiment has utterly failed.