Yes, Kit Harington was thinking about Trump during his "Better Lies" speech on "Game of Thrones"

According to Liam Cunningham, the whole cast was thinking about the election while filming that scene 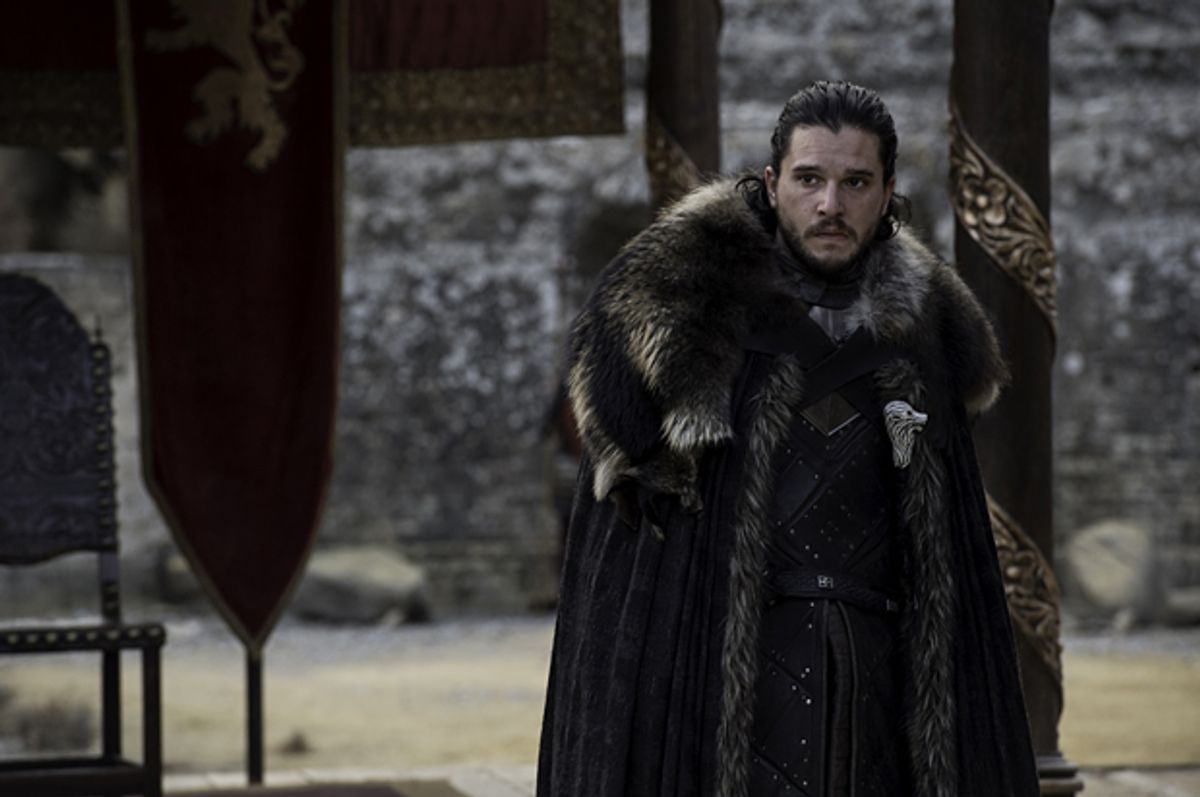 Kit Harington in "Game of Thrones" (HBO/Macall B. Polay)
--

This article contains straight-up spoilers from the recent season finale of "Game of Thrones."

On Sunday's season finale of "Game of Thrones," one of the show's most beloved characters delivered a vital speech about those who lie their way to power and those who unapologetically — and perhaps even at their own peril — tell the truth.

As many have noted across the broad expanse of the internet, the words not only fit the narrative of the show well, but also offer stunning resonance for anyone following the politics of truth-telling, modern society and, yes, the Trump administration.

In a moody speech in the middle of "The Dragon and the Wolf," Kit Harington's Jon Snow says:

I’m not going to swear an oath I can’t uphold. Talk about my father if you want; tell me that’s the attitude that got him killed. But when enough people make false promises, words stop meaning anything. Then there are no more answers, only better and better lies, and lies won’t help us in this fight.

Now, despite what some may think, the speech was not written in response to President Donald Trump's electoral victory nor the "alternative facts" his administration spins.

Nonetheless, as Liam Cunningham — the actor who plays Jon Snow's top adviser, Ser Davos Seaworth — revealed to Variety, Trump was certainly on Harington's mind when he delivered that speech.

As Cunningham tells it, the show's crew filmed in the hours after Trump won the 2016 U.S. presidential election in November. "That speech that Jon Snow gave about the nature of lies and what’s been said, and what happens if we don’t stick to our word," he said, "we filmed that on exactly the day that a certain POTUS was elected and it had incredible resonance while we were filming it."

Cunningham continued "The results had just been announced the morning we filmed that particular scene — that particular day of that scene with Mr. Kit Harington. We may have been rehearsing that scene," he explained. "But that was the first time that Kit Harington had said those words on that platform in that scene. So it had a certain resonance; I’m sure you’ll understand."

When asked if the "Game of Thrones" cast discussed the election on set, Cunningham replied "was there a person on the planet not discussing that election?" True.

Cunningham wasn't the only notable person who recognized the speech's implications for contemporary politics. Shortly after the finale ended, former White House communications director, Anthony Scaramucci, tweeted the quote, but later added in a follow-up tweet that it was merely a "comment on the political establishment."