With Pablo Escobar gone, the third season charts the rise of the Cali Cartel 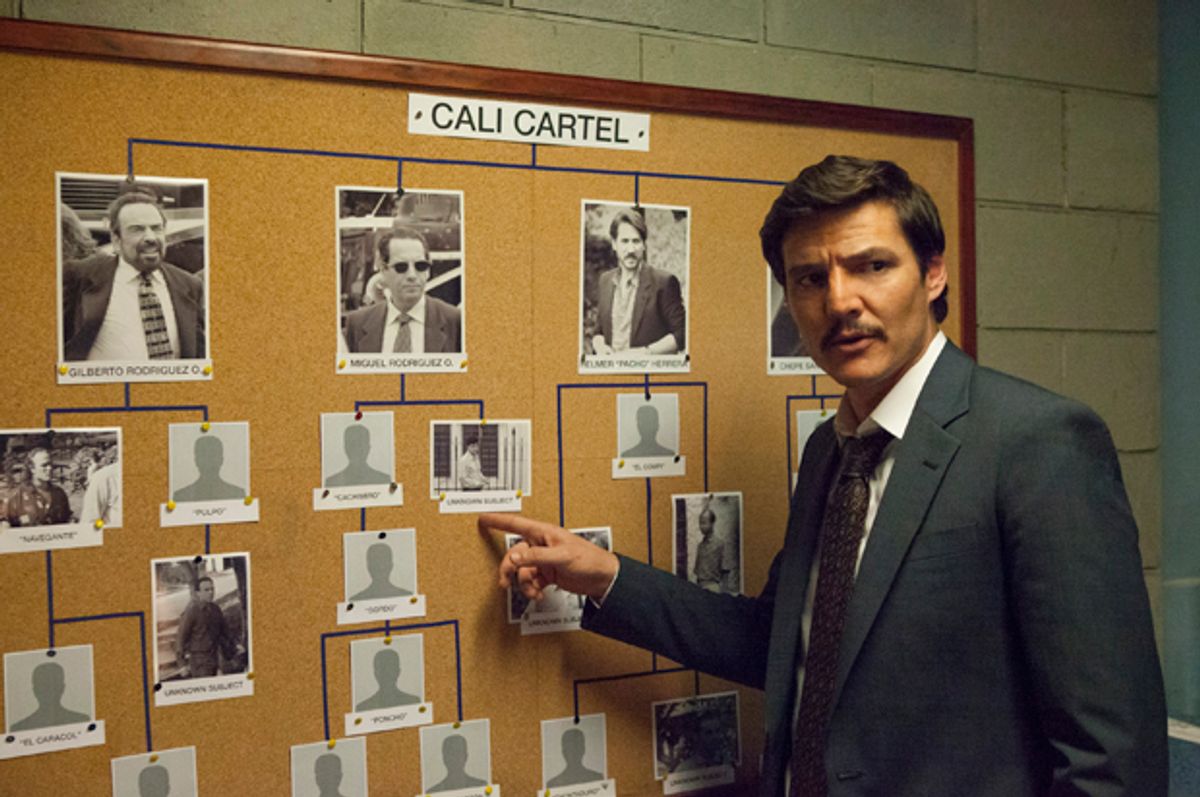 The proposition of “Narcos” has been an odd one since it first debuted on Netflix as a period piece. The drama’s focus on Pablo Escobar, rendered with an engrossing vibrancy by Wagner Moura, gave the man’s portrait greater weight than the ravages of the cocaine business upon Colombia and its people.

Escobar is long dead and enough removed from American consciousness to make his mugshot appropriate for outlaw T-shirt designs. This is what happens when people forget the impact monsters have on a nation and its people.

This is also the effect of launching a drama steered by the tale of a notorious criminal, his family and his empire, in an era profoundly shaped by “The Sopranos” and “Breaking Bad.” When viewers are made to see murderous ogres as loving parents and devoted spouses, they are no longer relegated to the nightmare domain where history tells us they belong. Some even become anti-heroes.

Decentralizing the focus of “Narcos” in its third season, debuting Friday, provides a chance for the series to remedy such a side effect it that one monster has been replaced by a cadre of them whose influence perverts a nation’s entire government. The Cali Cartel, the second most powerful cocaine distribution network after Escobar’s Medellin-based kingdom, is treated here as a flamboyantly violent group, a cross between the Corleones and the loosely-connected rival families of “Dynasty.”

They’re also much more dangerous, having learned from Escobar’s mistake of styling himself as a hero of the people to keep their moves secretive and their reach higher. By enlisting the collusion of government officials to give them cover as their expanse their business, the Cali families succeed in taking their business global.

This tactical shift changes the nature of “Narcos” significantly in season 3 from the hunt of a single terror into the quixotic quest to destroy a violent network that begets other savage networks in other countries. It also makes the narrative more closely resemble our understanding of the drug war’s lesson, largely that it’s a never ending series of battles that may never be won, with the main fronts shifting to different countries and old targets constantly being replaced by new ones.

“To kill a monster, sometimes you have to get in bed with other monsters,” says this season’s narrator Javier Peña, played by Pedro Pascal. “If that surprises, you, pick up a history book.”

Or, just read the news.

Netflix already picked up a fourth season of “Narcos,” and those with a passing familiarity of what happened to the Cali Cartel and an awareness of where the main hotspots exist today may appreciate the way season three brings the story out of a past it treated with the same romance as a mafia film to set up its examination of the drug-fueled violence currently tearing through Mexico.

In case you don’t, there’s always Google or the hint the streaming service dropped Tuesday in announcing an October 20 debut for “The Day I Met El Chapo: The Kate del Castillo Story.” The three-part allows Castillo to reveal never-before-seen footage and details of the actress’ meeting with the famed head of the notorious Sinaloa Cartel.

Before venturing into that realm “Narcos” uses the downfall of the Cali syndicate in the late 1990s to rectify some of the first and second season’s more significant flaws while indulging in other over-the-top tendencies that make it a mainstay of the gangster drama genre.

Foremost is the perspective shift from DEA agent Steve Murphy (Boyd Holbrook, who is absent in this third season) to Javier. Pascal grants Javier a tangible earnestness and common grit Holbrook’s cowboy lacks, immediately making him a more captivating guide into this frustrating territory.

And the four Cali bosses he and his colleagues are hunting — Gilberto Rodriguez Orejuela (Damian Alcazar), Miguel Rodriguez Orejuela (Francisco Denis), Chepe Santacruz Londono (Pepe Rapazote) and Pacho Herrera (Alberto Ammann) — operate with varying degrees of strategic acumen and impunity. Instead of treating the cocaine trade as a gang activity, the Cartel operates like a corporation, expanding exponentially and enlisting political allies. It also perfected wiretapping and communications interception, so much that the DEA has problems finding insiders to provide intelligence.

Much of season 3’s point of view remains within the flamboyant, dangerous world of these criminals, converting their coked-up machismo into palace and chamber intrigue. This is the first noticeable difference between the Escobar seasons and the third — there’s less of the collateral damage caused by the cartels in these episodes, although it was certainly present.

Instead, season 3 of “Narcos” is an examination of how paranoia can bring down giants. The Cali network’s interconnected web of bosses proclaim its intent to abandon their drug empire while they are on top. Understandably this announcement is met with varying degrees of mutiny and conspiratorial plotting by their less-wealthy underlings who anticipated getting their shot at reaping the benefits that come with occupying the top tier.

This instability breeds escalating levels of distrust within the network, making the bosses vulnerable to infighting and open to conquest from outside forces, including a U.S. government eager to do whatever it takes to stem the flow of white drugs into its cities.

Season 3 grants its female characters a bit more profundity — a bit — although most of the women are still either sex workers and wives enjoying glamorous lifestyles in exchange for their silence, all of whom teeter on the edge of becoming casualties the around the suspicions of a boss. “Halt and Catch Fire” star Kerry Bishé enjoys a guest star turn as the American wife of a management level figure in the cartel, but the actress’ recognizable face doesn’t necessarily ensure her character’s safety. (The same is true of a cameo role played by comedian Gabriel Iglesias.)

The American audience’s relative ignorance of these recent chapters in Colombia’s history allows “Narcos” showrunner Eric Newman a wide latitude in dramatizing these events. Even though there are enough people who lived through this history to set interested viewers straight with regard to the story’s departures into fantasy, the interspersing of archival news footage grants each episode the illusion of authenticity.

Of course a viewer would have to care about such matters for those details to affect his enjoyment of this series. The truth is, most “Narcos” enthusiasts are content to accept any history lesson the series offers as auxiliary to its operatic machismo. And its directors still rip plenty of pages from Martin Scorsese’s playbook, including one scene placed midway through the season featuring a solemn Catholic service in a brightly decorated church interrupted by a bombastic strongman.

In the flow of the story the moment is appropriate. In the larger context of the series, it’s still signature “Narcos.”