On this week's episode of "The Chauncey DeVega Show," we assess America's political health under Donald Trump 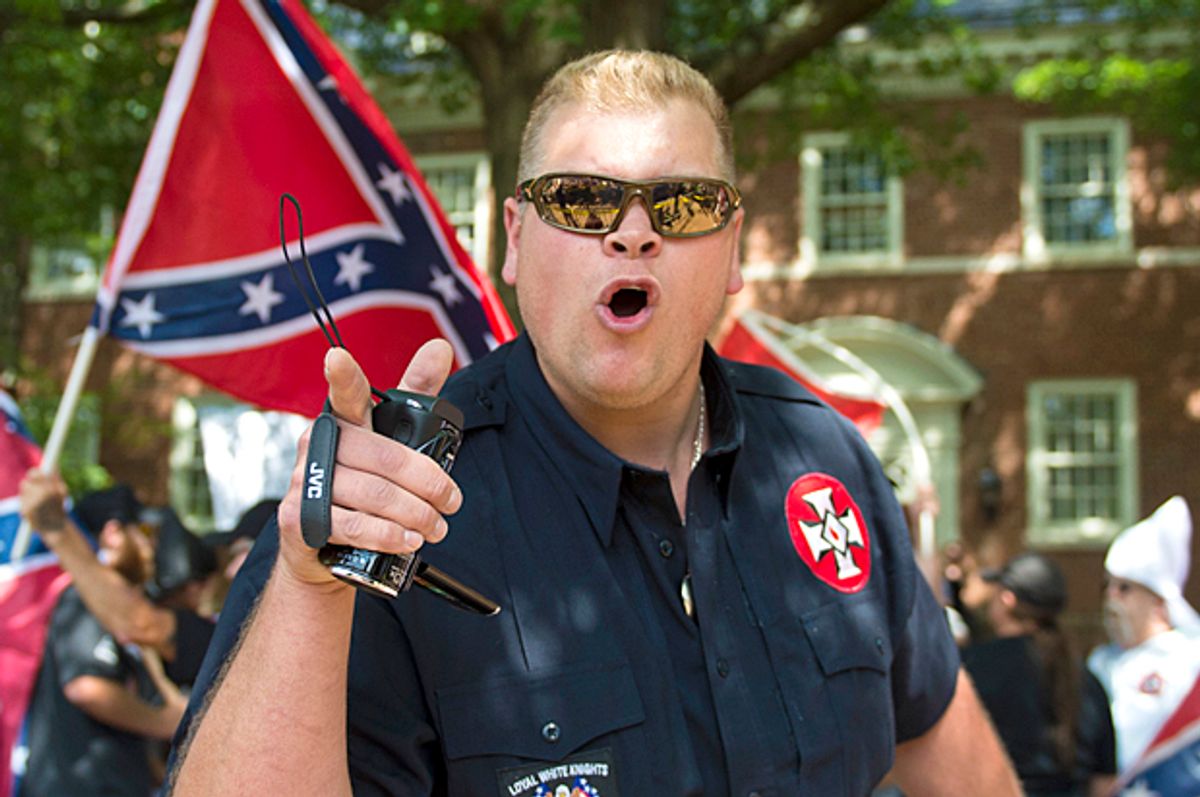 A member of the Ku Klux Klan shouts at counter protesters during a rally, calling for the protection of Southern Confederate monuments, in Charlottesville, VA (Getty/Andrew Caballero)
--

Donald Trump is an American fascist. This is no longer conjecture or the sum conclusion of anecdotal evidence. It is a plain fact that Donald Trump proves true almost every day.

Donald Trump provides aid and comfort to white supremacists and Nazis. Donald Trump has pardoned Sheriff Joe Arpaio, a man who, for many years, systematically violated the human rights of Latinos and Hispanics in the latter's own self-described "concentration camp." Donald Trump continues to assail the news media as enemies of the people. Donald Trump also continues to encourage violence against his political enemies. Donald Trump's supporters continue to embrace his political extremism and fascist appeals. And according to recent polling, his core supporters are extremely racist and thus are much more likely to embrace Nazism and overt white supremacy than are Democrats and other voters.

In an effort to evaluate America's political health and how it is responding to the fascist threat posed by Donald Trump and his supporters, I recently spoke with historian Timothy Snyder. He is an award-winning professor of history at Yale University and author of numerous books including "Bloodlands: Europe Between Hitler and Stalin" as well as "Black Earth: The Holocaust as History and Warning." His newest book is "On Tyranny: Twenty Lessons from the Twentieth Century."

In our conversation, Snyder explains how the white supremacist terrorism in Charlottesville could potentially fit into Trump's plans for authoritarianism in America, if Charlottesville was a "Reichstag Fire" moment, and how the rule of law is threatened by Trump's regime.

Professor Snyder also explained the historical antecedents and disturbing echoes of the white supremacist and neo-Nazi hate festival in Charlottesville relative to their origins in Nazi Germany.

"The right-wing marchers in Charlottesville were carrying torches, which is an imitation of Nazi methods. They were chanting anti-Semitic slogans. They were chanting 'blood and soil,' which is a foundational concept of Nazism. Mr. Trump is kind of saying that the Nazis are one side and then everybody else is the other side. What that does is it promotes Nazism. In effect, Mr. Trump’s statements are recruiting people to it. Because now the president is saying, 'Well, that’s one side of the conversation.'"

During this week’s episode of the podcast, political scientist Cedric Johnson stops by to share his thoughts about Kathryn Bigelow's new movie "Detroit," as well as the problematic racial politics of the much-praised film "Get Out."

You’ll also hear my thoughts about those people who are still somehow surprised by Donald Trump's fascism, and I explain how today's black conservatives are a modern day version of the black folks who helped the Ku Klux Klan in the American South after slavery.