Who said it about race: David Brooks or Dinesh D'Souza?

Two conservatives, one huckster and one upper-class twit. Can you tell their sophistry apart? 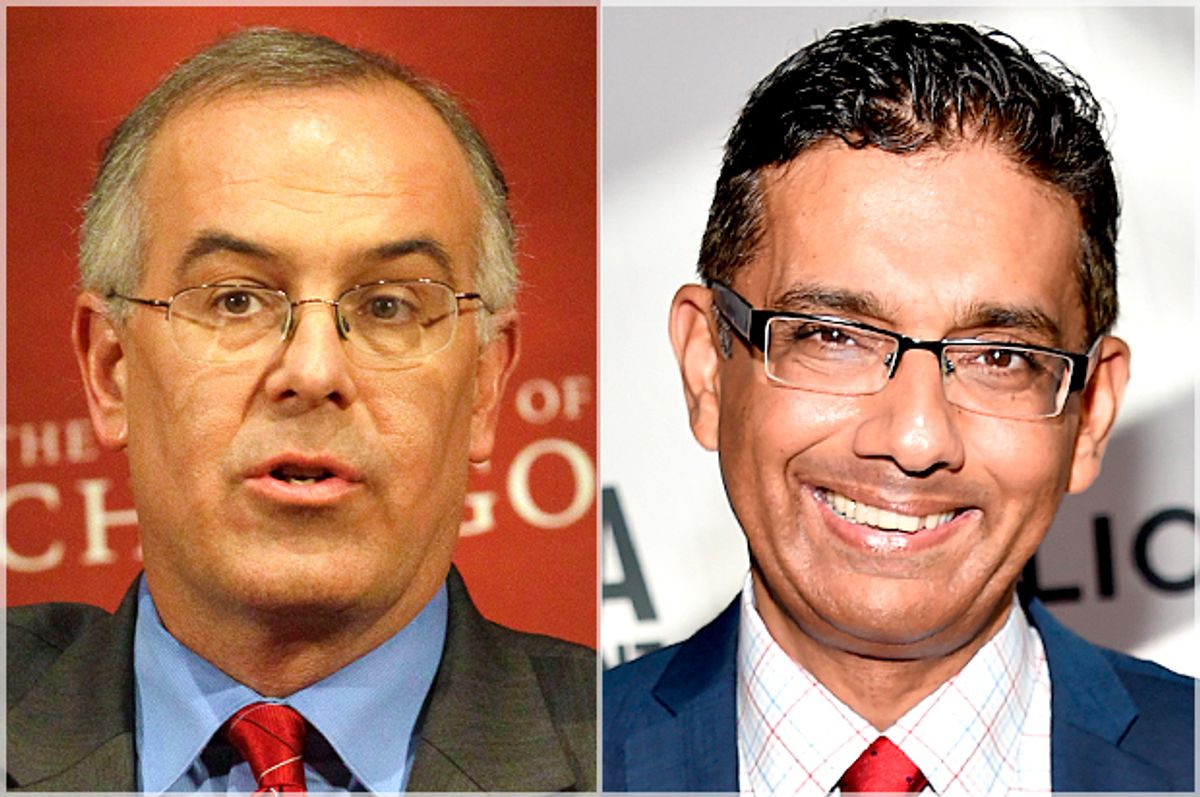 When it comes to thoughtful analysis on the sensitive subject of race, don't go looking in conservative op-eds. If you do, you'll find two equally Orwellian poles to their moral universe: the lowbrow "the left is racist" screeds of Dinesh D'Souza, whose schtick is pushing fact-free partisan hackery into the bloodstream of red America; and the high-minded bloviating of New York Times writer David Brooks, who can't seem to figure out why people may not want to hang out with him.

The New York Times columnist discovered Tuesday that racists are huge fans of Donald Trump, and, more surprisingly, Donald Trump's appeal to racists was a feature of his campaign, and not a bug.

"It’s ironic that race was the issue that created the Republican Party and that race could very well be the issue that destroys it," Brooks wrote, creating racial endpoints in American political history that have no in-between — no way, no how, no sir.

But if Brooks is the see-no-evil, hear-no-evil type, Dinesh is the one always looking for any fault as proof that liberals are destroying the world. Can you tell the difference?

Progressives are attempting to blame the GOP — the side that has been fighting the Democratic Party's racism and bigotry for over 150 years.

This one is, quite obviously, D'Souza. It has all the hallmarks — notably, the tell-tale, "racism exists and it's all Democrats' fault!" This quote comes from his 2017 book, "The Big Lie."

But the slavery battle was not mainly a North-South issue.  It was actually a battle between the pro-slavery Democrats and the anti-slavery Republicans.

Once again, that's D'Souza, taken from his 2016 book, "Hillary's America: The Secret History of the Democratic Party."

The G.O.P. was founded to fight slavery, and through most of its history it had a decent record on civil rights. A greater percentage of congressional Republicans voted for the Civil Rights Act than Democrats.

Ah, it's a gotcha! It's Brooks! I bet you saw the "Democrats are the real racists here" and thought it was Dinesh, but no.

Progressives also led the campaign to stop poor immigrants from coming to this country.   They championed laws in the 1920s that brought the massive flows of immigration to this country to a virtual halt.  The motives of the progressives were openly racist and and in the way the immigration restrictions were framed, progressives succeeded in broadening the Democratic Party’s target list of minority groups.

Of course it's D'Souza! Who else would be complaining about progressives?

[The Republican Party has] become more of a white party in recent years, of course, and adopted some wrongheaded positions on civil rights enforcement, but it was still possible to be a Republican without feeling like you were violating basic decency on matters of race.

Classic Brooks here. "Hey, this boiling pot of water seems to be getting warmer!"

I never heard blatantly racist comments at dinner parties, and there were probably fewer than a dozen times I heard some veiled comment that could have suggested racism. To be honest, I heard more racial condescension in progressive circles than in conservative ones.

Black rage is a response to black suffering and failure, and reflects the irresistible temptation to attribute African American problems to a history of white racist oppression. Despite substantial progress over the past few decades, African Americans continue to show conspicuous evidence of failure — failure in the workplace, failure in schools and colleges, and failure to maintain intact families and secure communities.

There are no dog whistles when it comes to D'souza. It's all bullhorn, baby!

Most blacks . . . support affirmative action as indispensable to fighting the enduring effects of white racism. On other racial issues as well, from the Los Angeles riots to the O.J. Simpson case, blacks and whites seem to view each other across a hostile divide. There is a political chasm as well: increasingly the Republican party is becoming the party of whites, while the Democratic Party is beholden to its African American voting base. If these political and racial divisions are exacerbated, we are likely to witness a further decomposition of the bonds that hold the country together

Once again, it's Dinesh. But this is from 1995, before he jumped the race-baiting shark.

What the progressives have carefully disguised, however, is the degree to which Nazi anti-Semitism grew out of Hitler's hatred for capitalism.

Trying to tie Nazis to the left? That kind of sophistry is classic D'souza.

Ah, but trying to whitesplain a defense of systemic racism is a very, very Brooks thing to do.

Conservative universalists are coming to realize their party has become a vehicle for white identity and racial conflict.

That's David Brooks, and he's shocked — shocked! — to see some racism going on!

What the progressives have carefully disguised, however, is the degree  to which Nazi anti-Semitism grew out of Hitler's hatred for capitalism.

Far from being sexually repressed, Nazis were perverts and bohemians — much like today's Democratic left.

Obviously D'Souza, but also probably, a cry for help.