Mattis may have delayed the transgender military ban, but some claim its effects are already being felt 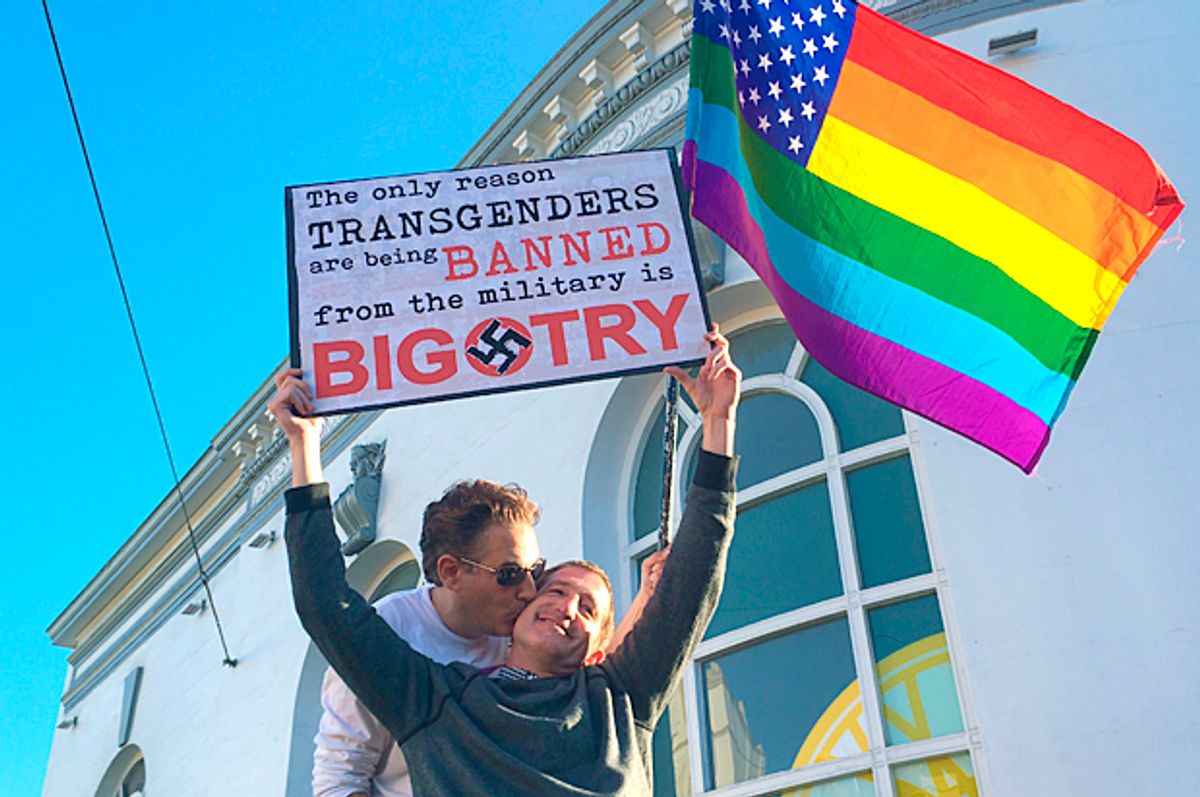 On Tuesday night, defense secretary James Mattis announced that transgender people will be able to continue serving in the military until a panel of experts reaches a recommendation for implementing President Donald Trump's order to remove all such servicemembers from duty and to prevent new ones from enlisting.

"Once the panel reports its recommendations and following my consultation with the secretary of Homeland Security, I will provide my advice to the president concerning implementation of his policy direction," Mattis said in a statement, USA Today reported. "In the interim, current policy with respect to currently serving members will remain in place."

President Donald Trump first announced his intentions to ban transgender people from military service "in any capacity" in a series of tweets last month, apparently catching the Department of Defense off guard. Despite the backlash he received from politicians on both sides of the aisle, military leaders, servicemembers, both retired and active and the general public, he signed and sent his new policy guidance to the Pentagon last week.

Despite the brief flurry of light praise Mattis collected for at least slowing the process (some went so far as to was presume that he was defying the president), the ban is still very much a looming reality reality. Those affected and advocates for them remain understandably alarmed.

"It was very clear from the president's orders that Secretary Mattis had to do either a slow purge or a fast purge, and he appears to be doing a slow purge, which I guess is as good as we could have hoped for," Mara Keisling, the executive director of the National Center for Transgender Equality told Salon.

And, yet, even after getting as good as trans advocates could have hoped for, those groups are finding that aspects of the policies the president hopes to implement with his directive are already active. Specifically, Keisling explained she has heard of military care providers "who have already denied medical treatments" to trans servicemembers. She adds that other trans people in the armed forces have "already been told they can not re-enlist."

"I've talked to both servicemembers and physicians who are saying that they are absolutely already denying health care," Keisling told Salon. "One of the most shocking things about this for most Americans I think would be that we never tell servicemembers that they can't have medical treatment that their military doctors say is medically necessary, and that's now happening."

Keisling adds that she feels that the policy is not only transphobic and disrespectful in the manner described above but is "not in the best interest of the United States or our national security."

Like many, Keisling remains in the dark about exactly what kind of experts will make up Mattis' panel or how it will come to its conclusions. She sounds a note of doubt, one that stands in contrast to the early, fleeting praise Mattis received following his announcement Tuesday night. "I'm unclear, as everybody is, exactly what will be studied," she said. "It seems to be studying how to purge the folks." Indeed, who exactly Mattis will impanel or if the committee could conceivably find the president's orders unimplementable remains unknown.

For Keisling, it is not the defense secretary but rather the man issuing his orders that provides the largest threat. "Mattis is in a bad position," she explained. "Where he has a ill-informed, know-nothing, dilettante, commander-in-chief."