A summer of drive-by listening

In the city, music at its most communal is surprisingly easy to overlook 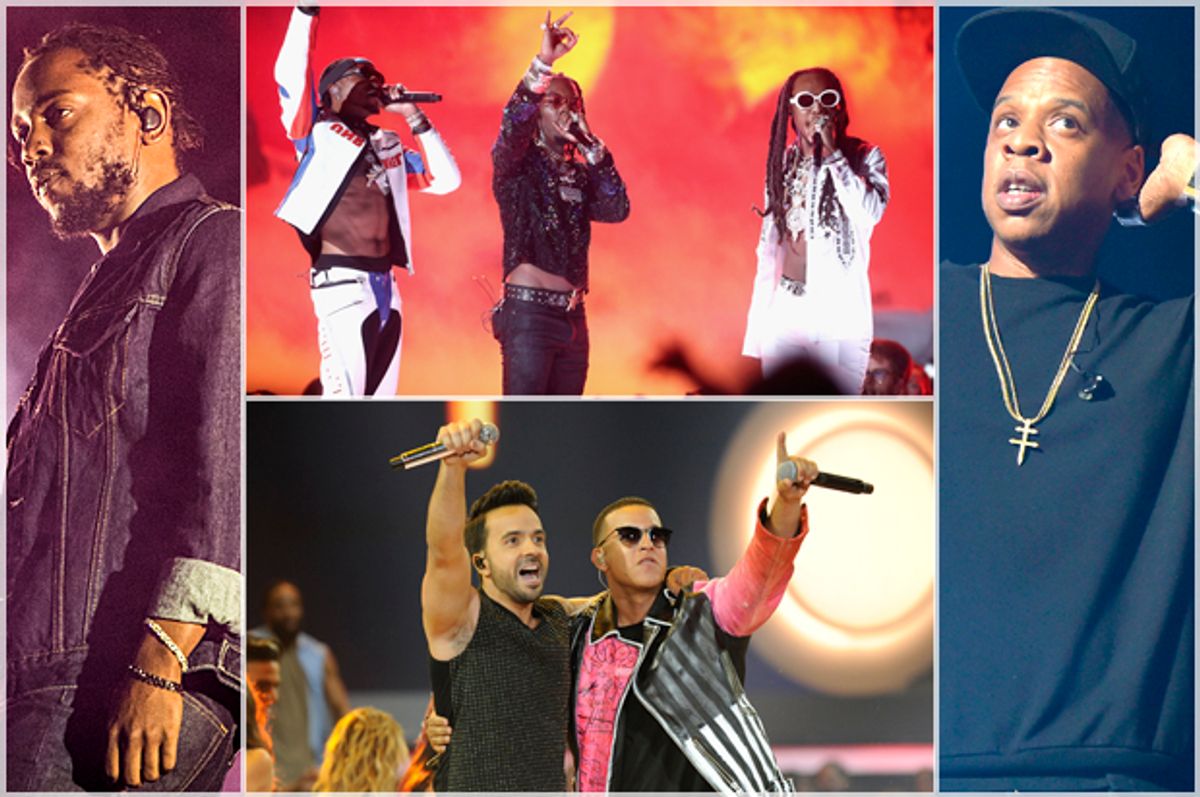 September 22 is the final day of Summer ’17, which leaves the pop field two weeks to put a small dent in Luis Fonsi’s claim for this year’s Song of the Summer. Fonsi’s Daddy Yankee- and Justin Bieber-featuring-featuring Latin dance smash “Despacito” have held the top spot on Billboard’s “Summer Songs” chart for the entire summer — and then some. This week marked “Despacito's" 16th atop Billboard’s Hot 100 (a different chart that is essentially the same chart without the exclusive focus on summer), tying the record set by “One Sweet Day,” Mariah Carey’s 1996 gospel duet with Boyz II Men.

The popularity of “Despacito” surprised me. I’ve spent the summer only vaguely aware of its existence and even more vaguely aware of what it sounds like. When I listened to it today, I thought perhaps I had never heard it before; when I listened to it again, I thought perhaps I had heard it many times, and it simply hadn’t made an impression on me.

Don’t get me wrong: “Despacito” is notable for a whole host of reasons — not least of which, it’s the first Spanish-language single to top the U.S. charts since “Macarena.” Maybe it’s been the soundtrack to your summer, but for me, it’s been absent. The song hasn’t followed me around like some past summer smashes. Last summer, I had the recurrent experience of being put unconsciously into motion by Drake’s “One Dance.” In previous summers, songs like Robin Thicke’s “Blurred Lines” and Iggy Azalea’s “Fancy” were impossible to ignore, not only for their beats and hooks but for the way they dominated the conversation, inspiring countless think pieces on topics like consent and appropriation.

But who cares? What is the Song of the Summer if not an arbitrary and unofficial award created to drum up content amidst the doldrums of the Silly Season on sites like this one? You’ll notice that the idea of a dominant summer song has been around for generations in America but that it was only in the mid-aughts — right around the time that blogging was coming into its own — that the entertainment press took the concept and ran. The New York Times’s former music critic Kelefa Sanneh, following in Ann Powers’ footsteps, began regularly writing about the Song of the Summer around that time. Billboard’s “Summer Songs” chart was born in 2010. And in 2013, Stephen Colbert satirized the debate over the year’s definitive summer song with a segment on the “Colbert Report” called “Song of the Summer of the Century.”

There’s a less cynical way to look at the Song of the Summer, though. The concept arguably became resonant when it did, not because of the need for content but because of the new importance placed on shared experiences. The mid-aughts was a time when CDs and radio gave way to iPods and mp3s en masse and when listening became more solitary. For most people, summer is the only time of year when music is experienced communally. It is the season of barbecues, pool parties and weddings. It is the season of car trips and driving around with the windows down and the volume up. To move around a city in the summer is to be constantly confronted with music played by other people, and usually that music is played with other people in mind. Summer songs need to be crowd-pleasers.

The shared aspect of the Song of the Summer is, I think, the reason why there is a debate each year over the one song to rule them all. Each year’s song is representative of the culture at large at a given moment. In 2014, Amanda Dobbins described the Song of Summer as, “by its very definition . . . a consensus choice.” She continued: “It is the song that wrecks wedding dance floors. It is the song that you and your mother begrudgingly agree on. . . . It does not necessarily have to hit No. 1 on the charts, but it should probably be on the charts, because it must be widely played. It must bring people together. It must be a shared enthusiasm.”

This summer, I made a conscious effort to monitor what I was hearing in shared settings. Until a few weeks ago, my workspace was near a traffic light on a mildly busy street in the middle of Bed-Stuy, in Brooklyn. When I opened my window, I could hear whatever song was blaring from a stopped car, if that car had its window opened. When I heard a song, I would Shazam it and add it to an ongoing Note. I did the same thing when I was walking around. Some days I forgot to keep track of what I heard. Other times I was too slow to catch the song. And now and again the noises on the street would prevent Shazam from picking up what was playing. What I wound up with was a small, highly unscientific, FiveThirtyEight-unapproved survey of the summer’s songs.

The list probably looks the way it does because so much of it was generated in Bed-Stuy. Hov’s old stomping grounds may be rapidly gentrifying, but hip-hop remains the area’s dominant sound. (Caribbean music is second.) The predominance of hip-hop on the list also explains why so little of what I heard was made by women: hip-hop, even in 2017, is a mostly male genre.

On the other hand, it occurred to me that maybe men tend to be the drivers who play music loud enough for the world to hear, and men want the world to hear them playing masculine-sounding music, which is often hip-hop. It’s just a hypothesis.

But regardless of why I heard what I heard, I found it interesting that what I heard only kind of jives with Billboard’s “Summer Songs” chart. I heard pop hits like Bruno Mars’ “That’s What I like” and DJ Khaled’s “I’m the One,” but I didn’t hear the ostensible most popular song of the summer (“Despacito”) once. Maybe I wasn’t paying close enough attention. Or maybe the communal experience of moving around a city in the summer can’t compare to listening to pop radio.

It was also notable that so much of what I heard was released in the winter and early spring, if not years ago. The tail for publicly playing music is longer than the one for downloading music, it seems. We think of summer anthems as songs that are released in the late spring or early summer, but often the songs that find their way onto summer playlists are just classics — from earlier in the year or from years earlier.

Will “Despacito” be one of those songs? Will it reenter summer playlists in five or ten years? For me, that’s hard to imagine; I was barely conscious of the song at its height. But maybe you’ve been walking around different streets.