Dear Donald Trump: This is why you should resign

An open letter to the president 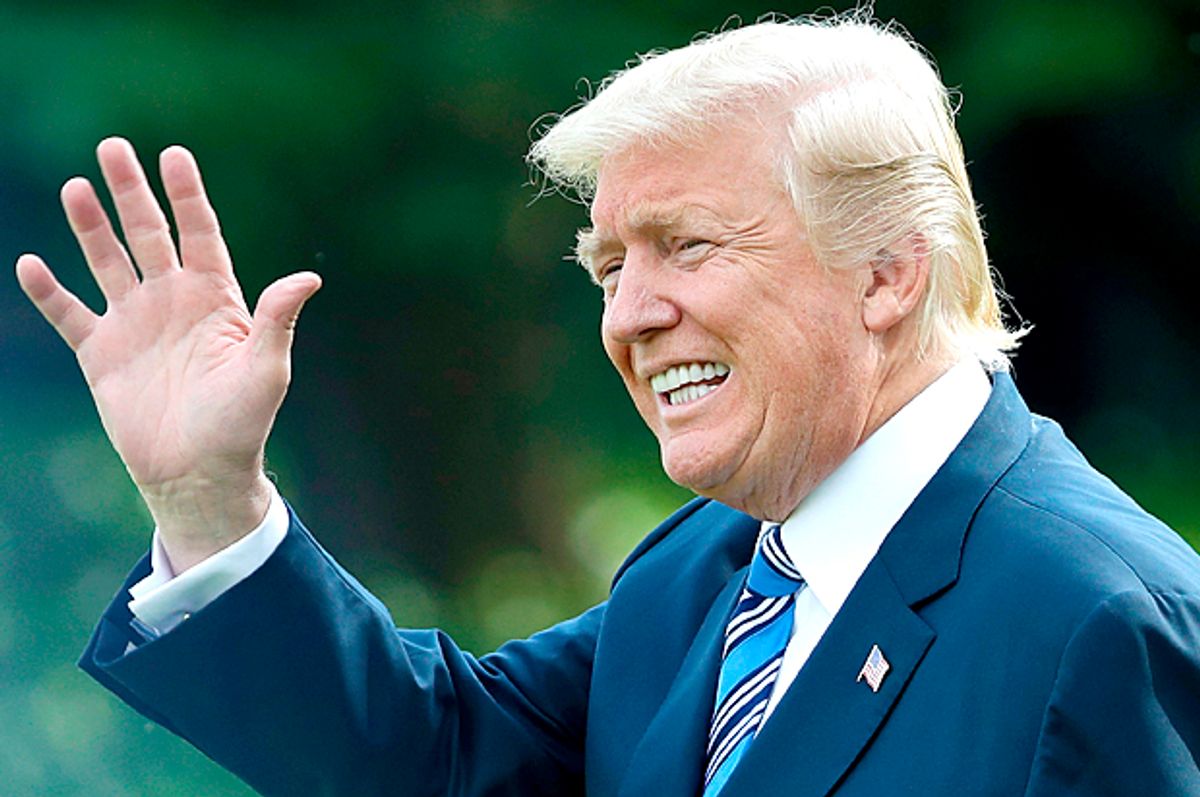 I find it extremely hard to call you “President Trump” because sadly for America, you neither act like a president nor speak like one. You neither have the moral authority that a president needs to project, nor the courage of one.

You do not have the country’s interest at heart like a president, nor the grasp of what America’s role in world is all about. Here is why:

Your statement about the events in Charlottesville was appalling. There is no moral equivalency between white supremacists, Nazis, and the KKK, and law-abiding citizens who want to preserve America’s moral values, freedom, decency and tolerance.

You callously stated that there were “some very fine people on both sides,” which outraged Democrats and Republicans alike. Mr. Trump, there is only one side: the one of bigots and racists.

You have made a mockery of the judiciary, rebuking judges for doing what is constitutionally required of them; you doubt the judgment and competence of judges because of their ethnic backgrounds and you questioned the courts’ legal decisions because they did not suit your desired outcome.

To be sure, you want and believe you have the right to operate above the law, and find it strange that the judiciary is independent and not even the president can bend the law.

Your most recent egregious contempt for our judiciary was pardoning an open racist such as former Maricopa County, Arizona, Sheriff Joe Arpaio, who was found guilty of criminal contempt for violating the constitution by using racial profiling to jail Latinos.

Lying as an art form

You have made lying an art form. Between January 21st and July 19th of this year, you have lied 113 times, believing that if you repeat these lies time and again, they will eventually sink in as the truth in the public’s mind. Your credibility, however, is shot, and only a fool can trust a word you say.

You constantly label any news which is not to your liking as “fake news,” but you thrive on press coverage to satisfy your insatiable lust for self-aggrandizement.

Your relentless charges against the media, accusing them of spreading fake news, opens the door for violence against reporters while you try to obscure your own false public statements.

You are a dictator in soul and spirit. No wonder you embrace despots like Russia’s Putin, Turkey’s Erdogan, and the Philippines’ Duterte.

You envy them for they can purge and rampage their country with impunity, and you can’t. When things do not go your way, you become enraged, vindictive and mean.

Your efforts to limit immigration to the United States defies the aspirations of millions who want to realize the American dream. This is the land of immigrants, the melting pot that makes America unique.

It is the riches of the newcomers, their cultural diversity, scientific achievements, experiences and collective ingenuity that made America second to none. America is already great, and you have nothing to offer that can make it greater.

You systematically undermine the intelligence community that has performed admirably over the years, only because they concluded that Russia meddled in the 2016 election on your behalf.

You have and continue to demoralize the most loyal men and women who dedicate their lives to serve the nation and on whom our national security depends.

Whereas you praise American soldiers fighting to protect our country and preserve our freedom and democracy, you arbitrarily ban transgender soldiers who have sacrificed no less than any other solider—possibly even more so due to the difficulties they face.

Punishing the most vulnerable

Contrary to your promises to aid the poor, the sick, and the despondent, you shamefully proposed a budget that would cut over the next decade more than $800 billion from Medicaid, $192 billion from nutritional assistance (including Meals on Wheels) and $272 billion overall from welfare programs.

That is not to speak of your reprehensible proposal to cut more than $72 billion from the disability benefit upon which millions of Americans rely—yet you demand billions to build a useless wall along the Mexican border.

You are narcissistic, self-absorbed, and selfish, constantly seeking glamor and adulation; you will go to any length to show off your riches but are afraid to release your tax returns, fearful of what they may reveal about your shady business deals.

You do not want the nation to discover the little or no taxes you have paid, how illegitimate many of your business transactions were, and what is in fact your true wealth.

After eight months in office you have failed to pass any significant legislation, blaming everyone but yourself for your inability to realize any of your campaign promises, including an infrastructure bill, tax reform, and even repealing and replacing Obama’s healthcare program, which you made a top priority.

You demand loyalty from everyone around you, but you are loyal to no one. You hired questionable personalities and fire anyone who questions your dictates.

You treat government agencies as if they were your private businesses, thinking that the government works for you alone. You still do not understand that there is something called checks and balances, and no one, including you, is above the law.

You dishonorably use the office of the presidency for self-enrichment, and unabashedly use the power of your office to promote your resorts and hotels, including the Trump National Golf Club in New Jersey, Mar-a-Lago in Florida, and the Trump International Hotel in Washington, D.C.

Never before has any president tainted the prestige of the office of the presidency to satisfy his greed forevermore.

While you occasionally call for unity, you are the most divisive figure that has ever held the high office of President of the United States.

You are sowing discord and disunity among the American people while catering to your shrinking base and cultivating a cult mentality, splitting the country into “us versus them.”

You demean women as if they are simply objects to play with for personal pleasure. You enjoy insulting women that you do not like, using vulgar language to describe their faces and looks, and never shy away from being rude and abusive to any woman who dares challenge your abrasive and loathsome behavior.

Does it ever occur to you that America’s national interest is best served by maintaining close, collaborative and mutually supportive relations between traditional alliances such as NATO, as well as new friends and allies?

You are quick to take credit for our sustained economic growth, even though it is the continuation of your predecessor’s sound economic policy.

Since you came to office, you have done nothing to spur further economic development. In fact, your erratic behavior is creating increased financial anxiety in the market, which does not augur well for making major American or foreign investments in various sectors of the economy.

In a time when effective and sound diplomacy is needed more than any time before to deal with manifold crises around the world that directly affect America’s national security, you proposed to cut the State Department’s budgetfrom nearly $55 billion for fiscal year 2017 to $37.6 billion for 2018.

Meanwhile, hundreds of vacancies of high-level positions at the State Department and Ambassadorships around the world, needed to conduct an effective foreign policy, remain unfilled.

Withdrawing from the Paris Agreement

Whereas the whole world came together and recognized that there is serious climate change supported by overwhelming scientific evidence and reached an agreement in Paris to dramatically reduce carbon emissions, you chose to withdraw the United States, which is the second-largest polluter after China, from the Paris Agreement.

Only recently, 13 different federal agencies (spearheaded by the U.S. Global Research Program) have concludedthat climate change is already occurring, which you ignored only to appease your so-called base to the detriment of future generations.

Your reckless statements lashing out against America’s enemies, using phrases such as “fire and fury the world has never seen before” in response to North Korea’s threats, poses catastrophic danger to America’s national security, especially because of your impulsiveness and lack of strategic thinking.

Former Director of National Intelligence James Clapper openly questioned your fitness to be Commander-in-Chief of the U.S. Armed Forces, with your finger on the nuclear button.

As president, you have never understood that with holding the most powerful office in the world, every word you utter, every signal or gesture you make and every move or measure you take matters greatly and has global implications.

Having a loose tongue and failing to understand the gravity of your words can send the wrong signal, which could provoke major unintended conflagrations with some of America’s sworn enemies.

You do well when you read speeches written for you from a teleprompter, but when left to your own devices and speak extemporaneously — you show who you really are and what you stand for.

It becomes demonstrably clear that you suffer from a moral, intellectual and ethical void and you try to cover your shortcoming by ridiculing and scorning everybody but those who cater to your ego.

To be sure, Mr. Trump, it is time for you to plan where you will go from here. The prospect that you will remain in office to the end of your term is becoming increasingly unlikely.

Your public approval rate at this juncture of your presidency is lower than any of your predecessors. A growing number of leading Republicans who want to save the party are now convinced that you do not have the temperament, knowledge, stability, and diplomatic savvy, not to speak of the moral authority, to lead the country.

I believe that you will be left with two choices: continue to defy the wishes of the majority of the American people and refuse to resign, or wait for impeachment from the House and the Senate. It is only a question of time, and time is running out for you.

If, as you claim, you are an American patriot who loves his country and cares about its future as a global power and its indispensable moral leadership role to make the world a better and safer place, resign now and do so with dignity for the sake of the country.

At a minimum, you will be remembered as the president who finally made the right decision by putting the country’s fate and future wellbeing before his own.