Trump's war on children: Deporting the Dreamers is next, and the GOP base will love it 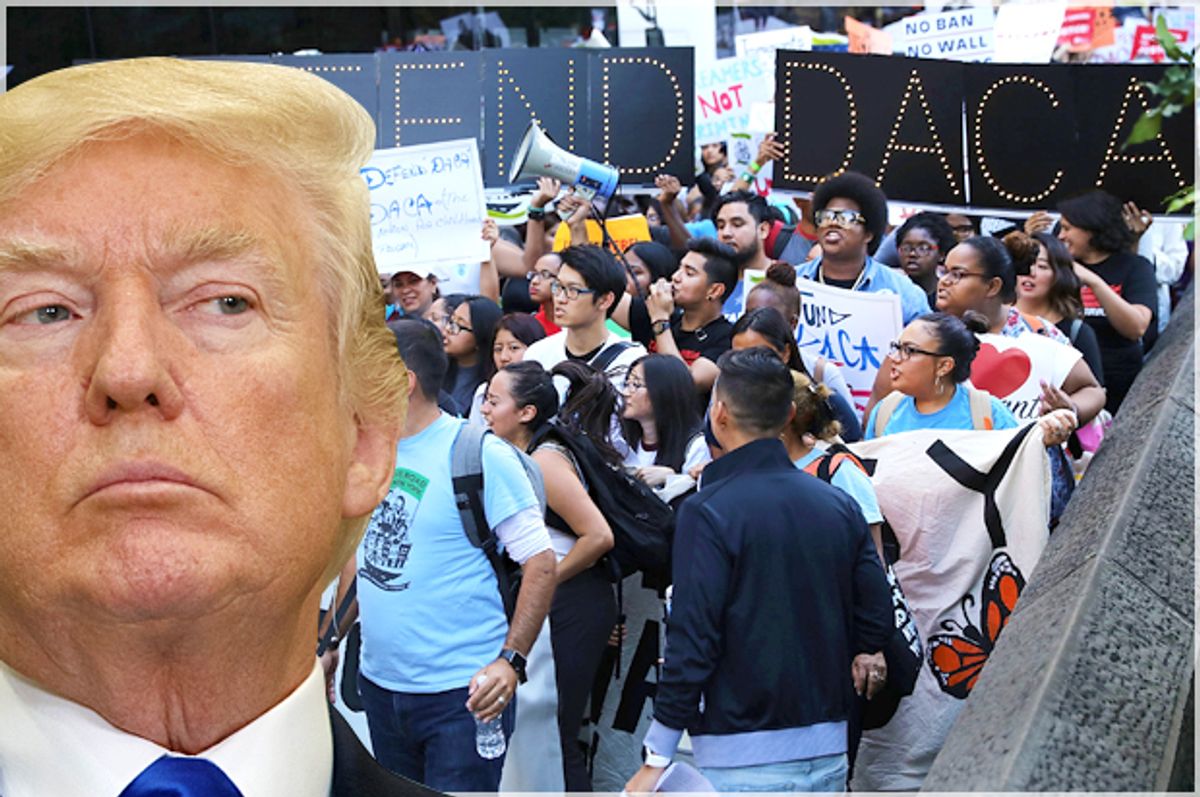 Vice President Mike Pence went down to the Hurricane Harvey disaster area on Thursday and, unlike his weird boss, behaved the way politicians typically behave in such a situation. He prayed with the locals and hugged the victims and promised that the administration will be there with whatever is needed. It was a standard performance. So far, members of Congress have also pledged all the federal help they need, and even Rep. Mark Meadows of the Freedom Caucus said that Congress should not take the hurricane relief and reconstruction hostage to pay for Trump's wall. (This probably means that the proposed $800 million in cuts to FEMA for the border wall is also off the table, thank goodness.)

It's early days yet and we still don't know if they will resort to the Karl Rove-style "disaster capitalism" they tried after Hurricane Katrina, but for the moment it appears that the federal government is doing what it's supposed to do in a national emergency of this magnitude.

But the administration and the Republican congressional leadership are still hard at work back in Washington plotting their ongoing assault on the federal government. After having wasted the year with their failed attempts to repeal Obamacare, there is almost no time left to raise the debt ceiling, pass the budget and shore up the ACA marketplaces, all of which would be difficult in such a short period of time, even under normal circumstances. Donald Trump is in the White House watching "Fox & Friends" and tweeting out every thought that passes through his mind, which lately has been an obsession with insulting his congressional allies. Even with the disaster in Texas pulling people together temporarily, this could turn into another legislative train wreck.

Unfortunately, an awful lot of the impending destruction seems to be aimed at children. Congress has a series of must-pass bills in a very short space of time facing it, when members return from recess next week. One of them is the re-authorization of the Children’s Health Insurance Program (CHIP), which provides health coverage to millions of children in low-income families. The Wall Street Journal reports that Republicans may attempt to use the CHIP deadline as a vehicle to revive their effort to chip away at the Affordable Care Act and could try to attach amendments to the bill to reauthorize its funding. Needless to say, any attempt to hide some kind of poison pill inside such important legislation is irresponsible in the extreme.

These are kids. It's hard to wrap one's mind around the fact that it would even be controversial to fund such a program. But it has been, from the beginning. Republicans in Congress are always looking for ways to defund it. They simply do not believe that the government should provide health care, not even for children.

But then, their president is said to be getting ready, possibly as soon as Friday, to give the order to rip three-quarters of a million kids from their country and their families and deport them. After keeping these people who were brought here as children by undocumented parents on tenterhooks for months, waiting to find out if their lives were going to be destroyed for no good reason except to please a minority of angry xenophobes, it was reported by numerous news agencies on Thursday that Trump has decided to end the DACA program.

That Trump would do this doesn't surprise me. He originally promised that all undocumented immigrants would have to leave the country, with no exceptions. Chuck Todd asked him what he planned to do about the Dreamers back in August of 2015:

Trump: The executive order gets rescinded. One good thing about —

Trump: We have to make a whole new set of standards. And when people come in, they have to come in —

Todd: But you're going to kick them out?

Trump: They have to go.

He also said that American-born children of undocumented workers would have to leave with their parents and suggested that he would push to end birthright citizenship altogether. Deporting the DREAM kids was always on his agenda, until late in the cycle, when he suddenly decided that he needed to pretend to have a heart about something.

Trump's heartlessness has never been in question. After all, he already had Homeland Security, under future White House chief of staff John Kelly, rescind the DAPA program last June, which allowed parents of DREAM kids to stay in the country under work permits. This is just the other side of that coin.

From what we can gather, Trump has now made the decision about the DREAM kids, with the only details left being to decide whether they will all be subject to deportation immediately or will be allowed to work through the end of their current work permits before they are thrown out of their country to go live in places which in many cases they don't remember.

Apparently, folks in the administration cynically believe they're being very clever with the timing here.

The Dreamers had no choice in coming to this country and are now Americans in every way but technical citizenship. The contributions they make to this country far outweigh any costs, and the business community is begging the administration not to do it. Deporting them is cruel and immoral. It's also stupid.

But what else is new in the Trump administration? At this point it seems incapable of doing anything else.