Bannon's failure: His grandiose vision of right-wing populism was never going to work 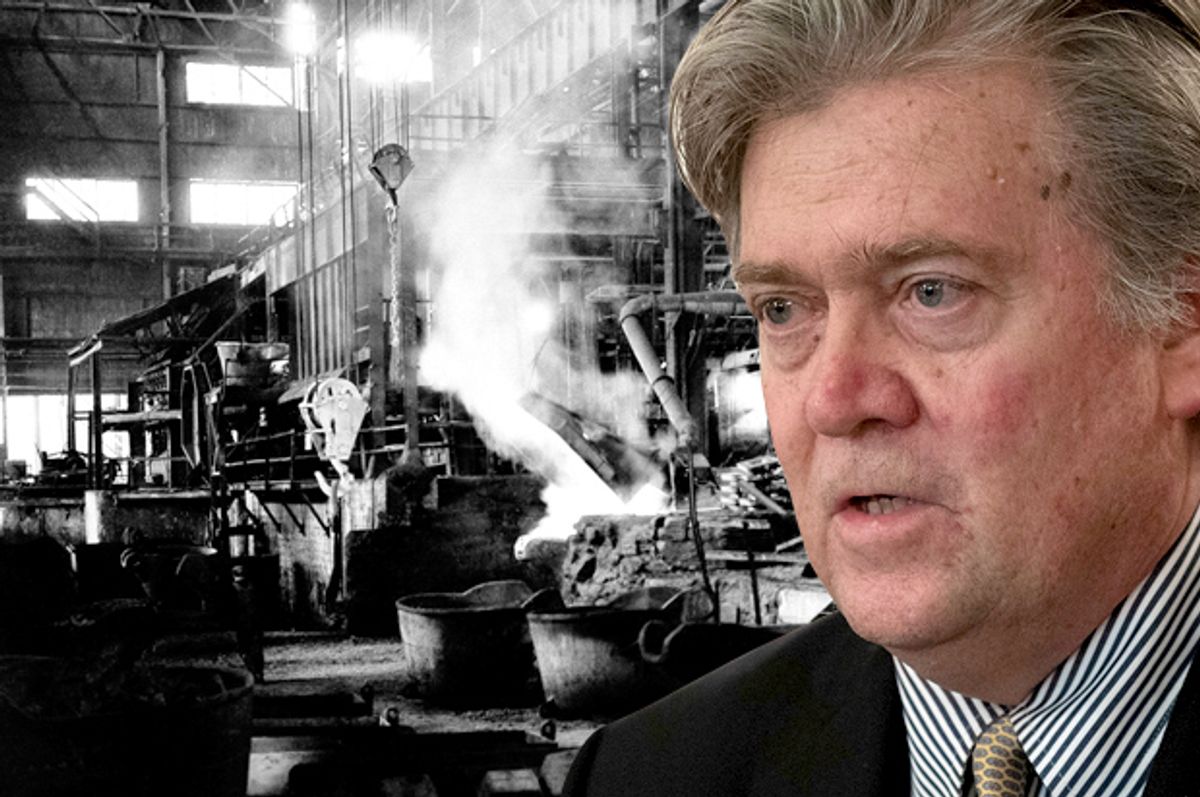 With Steve Bannon’s recent return to Breitbart News after serving seven months as White House chief strategist, a new era seems to have begun at the far-right website, which has operated as Donald Trump’s personal propaganda outlet for the past two years. In one recent article on the popular hub for the "alt-right," Trump was taken to task for letting the “globalists” in his administration get away with the “public humiliation” of their president.

This is just a preview of what we can expect to see in the months to come. With Bannon back at the helm, the far-right media company is set to wage a propaganda war against the “globalists” who are now firmly in control of the White House. The former White House adviser made this much clear in an interview with the Weekly Standard shortly after his departure. “Now I’m free. I’ve got my hands back on my weapons,” said Bannon. “I am definitely going to crush the opposition. There’s no doubt. I built a fucking machine at Breitbart.” The media executive also declared that “the Trump presidency we fought for, and won, is over.”

With these bold declarations, it is easy to forget that Bannon left the White House as a loser who had completely failed to accomplish what he set out to do. Nine months earlier, Bannon appeared to be the most powerful figure in Trump’s inner circle and was portrayed by the media as a brilliant, yet evil, mastermind — a reputation that was no doubt aided by the man himself, who praised Dick Cheney and Satan in an interview shortly after the election, declaring that “darkness is good.”

In that same post-election interview with The Hollywood Reporter, Bannon was glowing about the possibilities of the Trump administration. “If we deliver,” he gloated, “we’ll get 60 percent of the white vote, and 40 percent of the black and Hispanic vote and we'll govern for 50 years.” The recently promoted chief strategist was so confident, he even predicted the Trump presidency would “build an entirely new political movement” similar to Andrew Jackson’s populism of the 1820s. “I'm the guy pushing a trillion-dollar infrastructure plan,” Bannon boasted. “With negative interest rates throughout the world, it's the greatest opportunity to rebuild everything. . . . It will be as exciting as the 1930s, greater than the Reagan revolution.”

This was a brazen prediction, but after Trump’s shocking victory a week earlier, it was hard to doubt that Bannon was a man with a master plan. The greatest fear for progressives, of course, was that the Trump administration would actually succeed in enacting populist programs that turned out to be politically popular under Bannon's guidance. If his “economic nationalist” agenda was indeed a success, this would make it that much harder for Democrats and progressives to come back strong in 2018 and 2020.

It is now obvious that this fear was overblown. Bannon’s departure from the White House marked a turning point in the Trump administration, and it came after months of declining influence with the president. While the former chief strategist insists that there is still a “huge movement,” his seven-month stint in the White House was an unqualified failure. The Trump administration has yet to enact any of the major policies touted by Bannon (and Trump) last November, and it is now clear that the chief strategist lost a power struggle to the Wall Street Republicans and neocons that those in and around the "alt-right" call the “globalists.”

Bannon was, in a sense, the chief ideologue of “Trumpism.” He was the man who translated Donald Trump’s incoherent ramblings and xenophobic tirades into ideas (albeit very bad ideas). His departure signals that Trumpism — at least in its populist incarnation — is dead. The White House is now dominated by Wall Street insiders and military hawks who are determined to keep Trump’s populist impulses in check. Though Trump is still eager to fulfill certain campaign promises, his advisers are firmly opposed to the “economic nationalist” agenda. “You have no idea how much crazy stuff we kill,” one senior administration official told Axios last month, claiming that there would be a trade war with China, mass deportations and a government shutdown over Trump's border wall if “sane” people weren’t advising the president.

There are various reasons why Bannon failed to carry out his right-wing populist agenda. Perhaps the most obvious is the fact that Jared Kushner, the president’s son-in-law, was leading the “globalist” faction against him. In a recent piece in Vanity Fair, a former Trump adviser told reporter Sarah Ellison that anyone who is “hitched” to Kushner and Ivanka Trump is “untouchable,” which makes going up against the president's daughter or son-in-law a losing battle.

Ultimately, however, Bannon didn’t fail because of evil Globalist Cucks like Javanka (though they do make perfect villains for the "alt-right" crowd). Bannon failed because of the simple fact that right-wing populism — i.e., Trumpism — was never a viable political project to begin with.

While Trumpism was ostensibly a revolt against the status quo, as a political movement it never offered any true alternative to the neoliberal status quo. Like the Luddites in early 19th-century Britain who destroyed the machinery that had rendered their work obsolete, Trumpists wanted to smash the establishment to pieces without seriously considering what would replace it. Of course, just as the Luddites had every right to be angry about the technological changes disrupting their lives, Americans have every right to be angry with a Washington elite that serves corporations and billionaires. There are many valid reasons for today’s populist outrage, but Trumpism was never a legitimate vehicle for that outrage.

Donald Trump built his campaign on lies and pseudo-issues, and even when the candidate touched on real problems he failed to identify the root cause or offer any practical solutions. Consider the central narrative of Trump’s campaign: Illegal immigrants are flooding our shores and stealing American jobs, and all the quality manufacturing jobs are being shipped overseas to China and Mexico. In this case, Trump alluded to a real problem, the decline and stagnation of the working (and middle) class. But rather than identifying the source of the problem — that is, our deeply flawed economic system — he scapegoated immigrants and foreigners.

Facts directly contradict this xenophobic narrative. Illegal immigration, for example, has actually declined since the Great Recession, while the vast majority of manufacturing jobs that have disappeared over the past 20-plus years have been lost due to automation, not trade or immigration. (In other words, through “creative destruction,” as economists put it).

Reactionaries like Trump and Bannon seek to exploit legitimate anger and anxiety caused by things like economic inequality, globalization, deindustrialization and so on. But they do not discuss the root causes, nor do they provide genuine solutions. This is why right-wing populism is so disastrous in practice — as evidenced by the past seven months.

In a 2016 article for The Daily Beast, conservative writer Ronald Radosh claimed that in 2013, Mr. Bannon told him at a dinner party that he considered himself a “Leninist.” When a baffled Radosh asked Bannon what he meant, the Brietbart executive reportedly said that Lenin “wanted to destroy the state.” He continued: “That’s my goal too. I want to bring everything crashing down, and destroy all of today’s establishment.” Lenin, of course, didn’t simply want to destroy the establishment and bring everything crashing down; whether you believe in his goals or not, he was fighting to create a new socialist society. Bannon’s goal, by contrast, is fundamentally reactionary: He dreams of reversing the course of history and restoring society to some past golden age.

Ironically, Bannon seems to partially understand that capitalism is at the root of many of our modern ills. In a 2014 speech to the Human Dignity Institute, Bannon criticized two forms of capitalism: first, “crony capitalism” — described as “a brutal form of capitalism that is really about creating wealth and creating value for a very small subset of people” — and second, the “Ayn Rand or the Objectivist School of libertarian capitalism,” which “looks to make people commodities, and to objectify people, and to use them almost.”

Bannon rejects these “disturbing” and “brutal” forms of capitalism and advocates what he calls “‘enlightened capitalism’ of the Judeo-Christian West.” According to Bannon, during the era of “enlightened capitalism” (i.e., the 20th century), most capitalists were either Jewish or Christian, and their deeply held religious beliefs guided their economic behavior. “The underpinnings of their beliefs was manifested in the work they did,” declared Bannon. This romantic (and reactionary) view ignores the fact that the “enlightened” version of capitalism during the 20th century (in the West, at least) was a product of social democracy, itself a result of decades of pressure from socialist and labor movements. It was not because of their cherished Judeo-Christian ideals that capitalists in the West accepted the welfare state, but because they feared socialist revolution.

What Bannon and other reactionaries of his ilk cannot seem to grasp is the fact that the disturbing trends he criticizes are not a product of “crony capitalism” or “Ayn Rand capitalism,” but capitalism, full stop. Only the populist left seems to grasp this fundamental truth, and ultimately, only the left can offer a genuine and viable alternative to the status quo. In the meantime, the dumpster fire that is the Trump administration will continue blazing while Bannon and his acolytes at Breitbart get back to pushing out propaganda to their credulous base.