Trump was wrong about Civil War monuments. You can change history

My family proved it at Monticello 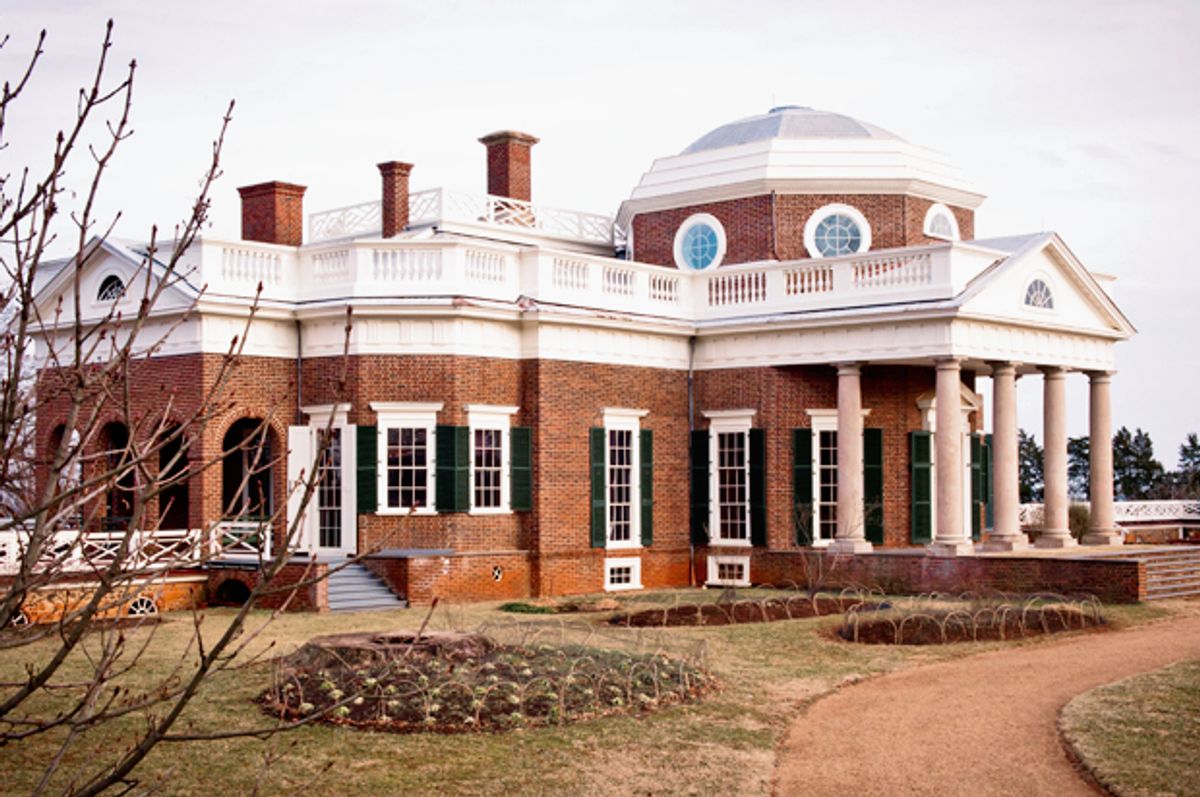 Before white supremacists marched in Charlottesville, Va., in defense of a statue of Robert E. Lee, before this nation’s president tweeted,  “You can’t change history, but you can learn from it. Robert E. Lee, Stonewall Jackson — who’s next, Washington, Jefferson? So foolish!” a huge majority of my family organized to defend history as it had regarded our ancestor Thomas Jefferson. It was 1998, and a DNA study of descendants of Jefferson had produced evidence that he had fathered Sally Hemings’ children. Until that evidence was published, every prominent historian save two had taken the position essentially that despite the unarguable fact that Jefferson had owned more than 600 slaves during his lifetime, he was “not the kind of man” who would have had children with a slave. Jefferson’s reputation was at stake. So was history as we had known it.

I was invited on "The Oprah Winfrey Show" that winter with my sister Mary where we met about 25 of our Hemings cousins. There was little doubt in that television studio — and no doubt whatsoever among the descendants of Sally Hemings and Thomas Jefferson — what the truth was. Oral history within their family had held for almost 200 years that Jefferson and Hemings had had a 36-year relationship that had produced six children. About three-quarters of the way through her show, right after we came out of a commercial, Oprah put me on the spot. She turned to me and said something like, since you’ve met your cousins, Lucian, what are you going to do now?

For an instant, I sat there speechless. Even though I had accepted for years the fact that my fifth great-grandfather had fathered Sally’s children, Oprah was right. I hadn’t done anything. I was one of Jefferson’s great-grandchildren whose descendance was never questioned. In fact, when I wrote a New York Times Op-Ed piece in 1998 about the Jefferson-Hemings controversy, it was the first time I had announced publicly that I was a descendant. Do you think the editors of the august New York Times, for whom I had written for 25 years without telling them about this part of my past, asked me a single question about how I was descended from the nation’s third president? Do you think they asked me for a single piece of evidence that this was true? The answers are no, and no. I was accepted as a great grandson of Jefferson and permitted to tell the world about it in the pages of the most important newspaper in the world for one reason: I was white. It had been easy my entire life to sit there and be who I am and do nothing, but suddenly, it wasn’t. Oprah and her live audience sat there waiting for my answer: What, in fact, was I going to do?

Then it came to me. I said, I’d like to invite everyone from the Hemings side of the family to accompany me to the annual Jefferson family reunion at Monticello the following May. Innocently, I thought it would be a wonderful occasion for the two sides of the family to meet, and now that DNA had established that we shared Jefferson as our great grandfather, our Hemings cousins would be welcomed into the family and could join the Monticello Association, the family group that owns the graveyard at Monticello. After all, Oprah herself had told the audience that day that she didn’t need anyone to tell her who she was, and who her ancestors were. “I know every day when I wake up and look at myself in the mirror.” It was time for the descendants of Thomas Jefferson and Sally Hemings to tell their white cousins that they were Jefferson’s great-grandchildren too.

So the following May, we went to the reunion, my brother and sisters and I and about 50 or our Hemings cousins. I’ll tell you without further ado that it didn’t go as I had expected. Even though, quite literally, hundreds of representatives of the press from all over the world were there to record the event, things got ugly. Racist comments were made to some of our Hemings cousins by some of the white descendants. The day following the reunion on the mountaintop, at a family meeting in Charlottesville, the battle lines were drawn. There was no way the white descendants of Jefferson were going to accept the Hemings descendants into the family. In coming years, as my Hemings cousins and I went to the family reunion again and again, speeches would be made; treatises by various historians would be commissioned and published attacking the Hemings’ claim; attacks in the media were launched against me, questioning my motives and alleging arrests for crimes I didn’t commit and convictions in trials that never happened. During the first two years, I received more than 100 anonymous death threats by telephone, email and U.S. mail. My personal favorite was an envelope that arrived in the mail containing two photos. The first was of a .45 caliber pistol showing a Jefferson nickel embedded in its wooden grip. The second was the same pistol pointed straight at me with the words “race traitor” hand-written underneath.

Eventually, a family “membership committee” would be empaneled to “study” the legitimacy of the Hemings' claim that they were descended from Jefferson and would find it wanting, because they lacked the “paper trail” of birth certificates for Sally’s children that would establish without a doubt who their father was. In fact, the so-called membership committee of the Monticello Association was demanding this “paper trail” despite the fact that it didn’t have one for a single member. Nowhere did it have on file the birth certificates of Jefferson’s white daughters, Maria and Martha, from whom I am descended, or the birth certificates of their children and all the children in the family who followed. My parents didn’t provide the committee with a birth certificate, and if they had been required to, I wouldn’t have qualified, because I was born right after the war in Japan in an Army field hospital, and they weren’t prepared for children being born to soldiers overseas in Japan, so I don’t have one. Nor did I send to the Monticello Association copies of the birth certificates for my children, who became members upon their births.

Finally, after three tumultuous years, a vote was taken. It was 95 to six against. The six voting for the Hemings to be accepted into the family were five Truscotts and our cousin Marla Stevens. But although most of Jefferson’s descendants may have stood in the door of history that day, the rest of the world moved on. Today, it is widely accepted by historians and the public alike that Thomas Jefferson fathered all of Sally’s children.

So among all of the other ways President Trump was wrong about Charlottesville, he was wrong to ask if Jefferson would be “next.” The reputation of Jefferson that members of my family fought so hard to protect — his metaphorical statue as the kind of perfect white man who would not have fathered children with a slave — has already come down. The funny thing is, the last time I looked, he was still our third president, still revered as a Founding Father of the nation, still celebrated as the man who — arguably hypocritically — wrote the Declaration of Independence finding that “all men are created equal.”

What I learned from my role in trying to get the white members of my family to accept our Jefferson/Hemings cousins was this: History can change, but it doesn’t happen if you just sit there and do nothing. Since I invited my Hemings cousins to the family reunion on the mountaintop outside Charlottesville, Monticello has embraced the history of Jefferson and Hemings. Recently, a room she shared with her brother James, Jefferson’s Cordon Bleu-trained chef, was excavated from what had been a public restroom located in the “dependencies,” the slave quarters attached to Monticello. If the history of a great man like Thomas Jefferson as a slave owner who fathered Sally Hemings’ children must be uncovered in order for the truth to be known, so be it. If a statue of a great general like Robert E. Lee must come down in order for the truth of what he did in the Civil War be known, so be it. Trump was wrong. You can change history. In fact, history demands it.