What if Silicon Valley is to blame for all of this? 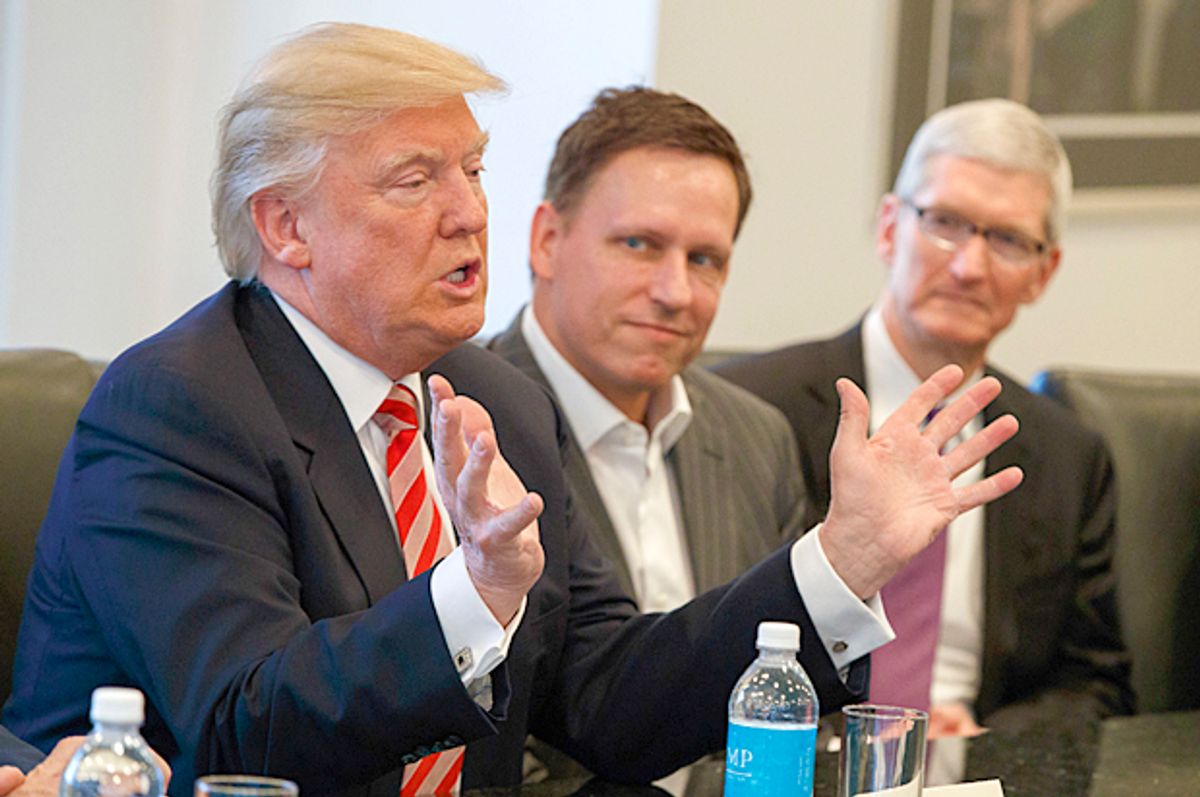 In 2002, when America’s religious fundamentalists were at the height of their power, my 80-year-old grandmother — a California-grown, lifelong progressive — lamented to me about the state of politics in the Bush regime. “Back in the sixties, we just thought things were going to get more and more progressive,” she grieved. “We never thought we would go so far backwards.”

As a teenager, this thought chilled me. And it’s probably good she isn’t alive to see what’s happened since then.

Looking at the state of the nation, many of us — on both the left and right — are similarly inclined to believe that we have regressed. Nazis are a problem again, astonishingly. Income inequality is at a historic high, and though the economy is purportedly doing well, nearly all the gains go to the wealthiest. Austerity seemingly continues in spite of this, and a full-time job with benefits is hard to find; meanwhile, rather than scapegoat the true sources of economic anxieties (read: the rich and their ideological lackeys), many Americans instead blame immigrants, those on welfare, and minorities for their problems — beliefs that propelled Trump to power.

These problems seem disparate on the surface: an amalgam of neoliberal economic policies, a decrepit two-party system, and cultural mores. And yet all of them have at least some origin in Silicon Valley.

On the surface, this claim sounds unbelievable. After all, most of the tech industry is, ostensibly, liberal; many major tech companies have progressive policies when it comes to, say, workplace civil rights. And yet, by commanding our attention, directing it in certain ways, and profiting off our eyeballs, the tech industry — and particularly social media companies — have enabled and ennobled some of the worst tendencies in the American electorate.

“We live in an era of reflexive opinionating and quasi opinionating, and we derive much of our information about the world from websites that have themselves blurred the distinction between reporting and commentary, or obliterated it completely,” wrote Thomas Frank in Harpers shortly before the 2016 presidential election. While the left is not free from sin, many right-wing provocateurs and profiteers were content to profit off of this “blurred distinction between reporting and commentary,” as Frank put it. While the American left has been content to whine repeatedly about Trump’s lies, much of the right-wing commentariat has made it clear that not only do they not give a shit, their readers and viewers don’t either. After Rush Limbaugh was fooled by an obviously trolling tweet about a Columbus, Ohio, postal worker "ripping up absentee ballots who vote for trump," Limbaugh didn't apologize for misleading his viewers with lies. Instead of correcting the record, he went on a tirade about the reluctance of the "Hillary media" to report on a claim that required 30 seconds of fact-checking to debunk.

The New York Times wrote an excellent profile in 2016 of some of the digital entrepreneurs who profit off of fake news. One was Beqa Latsabidze, a Georgian (as in the country) computer science student who started a pro-Trump website that served up fake or exaggerated news stories intentionally designed to whip up Trump’s base in order to get ad revenue. If his fake news stories were sludge, social media was the sewer pipes.

Fake news traffics pretty much exclusively through social media sites like Facebook and Twitter, which intentionally work like hermetically sealed ideological bubbles — showing users more of what they like, and less of what they don’t, to keep them on these sites for as long as possible. Like most sewer companies, they don’t really care what kind of shit flows through their pipes as long as they can profit off the traffic.

Anonymous and pseudonymous online forums, by their nature, bring out the worst in people. And in the absence of any explicit politics, they become overrun by people trying to outdo each other with edginess — which ultimately leads to far-right politics. “4chan was always about trolling and transgression, and a kind of anti-moral, anti-sentimental sensibility,” Angela Nagle, who wrote a book on the alt-right, told Salon in an interview. “It was also about posting or saying the most shockingly horrible thing you could think of. It’s not surprising that it would eventually take on a more formal political set of principles.”

This has happened in video gaming too. The Intercept published a report last week on the way that multiplayer video games and their associated forums have become bastions of white nationalist recruitment. As the Intercept reported:

In recent years, neo-Nazi groups, once confined to spreading their message through marginal radio programs and small publishing houses, have turned to video gaming forums; websites associated with ironic “alt-right” pranksters, who espouse far-right ideologies grounded in white supremacy; and have blended with the so-called “Men’s Rights Movement” to find new foot soldiers, many of whom are the kind of disaffected young men who are ripe for recruitment into extremist movements around the world. The dark humor that has flourished in these forums, with their blurred and overlapping lines, sanitizes ideas of a race war and genocide, featuring pitched battles between racial identities. This online cauldron has been an important factor in fueling the growth of the “alt-right” and adjacent white nationalist organizations.

You know what else causes people to latch on to authoritarian movements? Lack of economic opportunities. The tech industry has been excellent at stoking that. In the absence of a viable left alternative, plenty of Americans whose jobs have been automated or gig-economified — thanks, Uber — have found economic scapegoats in immigrants and minorities. Indeed, the economic anxieties created in part by the tech industry led immiserated Americans to find solace in Trump’s promise to restore their lives to an imagined greatness.

Why doesn’t anyone blame Silicon Valley for our failing institutions and sudden authoritarian glut? There is one big reason, and it comes down to branding.

Computing and the internet both emerged from utopianists' visions. Early hackers and internet advocates saw the revolutionary potential of these technologies; some believed that the internet would subvert governments and lead to revolution. John Perry Barlow, a founding member of the Electronic Frontier Foundation and early internet booster, wrote a  manifesto in 1986, called “A Declaration of the Independence of Cyberspace,” that sounds laughably quaint and optimistic by today’s standards:

“Governments of the Industrial World, you weary giants of flesh and steel, I come from Cyberspace, the new home of Mind. On behalf of the future, I ask you of the past to leave us alone. You are not welcome among us. You have no sovereignty where we gather.”

Put that on a plaque and send it to the NSA.

Still, today, many tech scions cater in the same brand of utopian rhetoric. Mark Zuckerberg, Sergey Brin, Tim Cook, Elon Musk and their ilk speak not of making profit (which they do), but of “changing the world.” They’ve definitely managed to change it, although I’m not sure it’s for the better.