California's past and coming superstorm: Flooding that will make Harvey a dim memory

In the 1860s, the West Coast experienced a biblical-scale flood, one of the worst in history. It will happen again 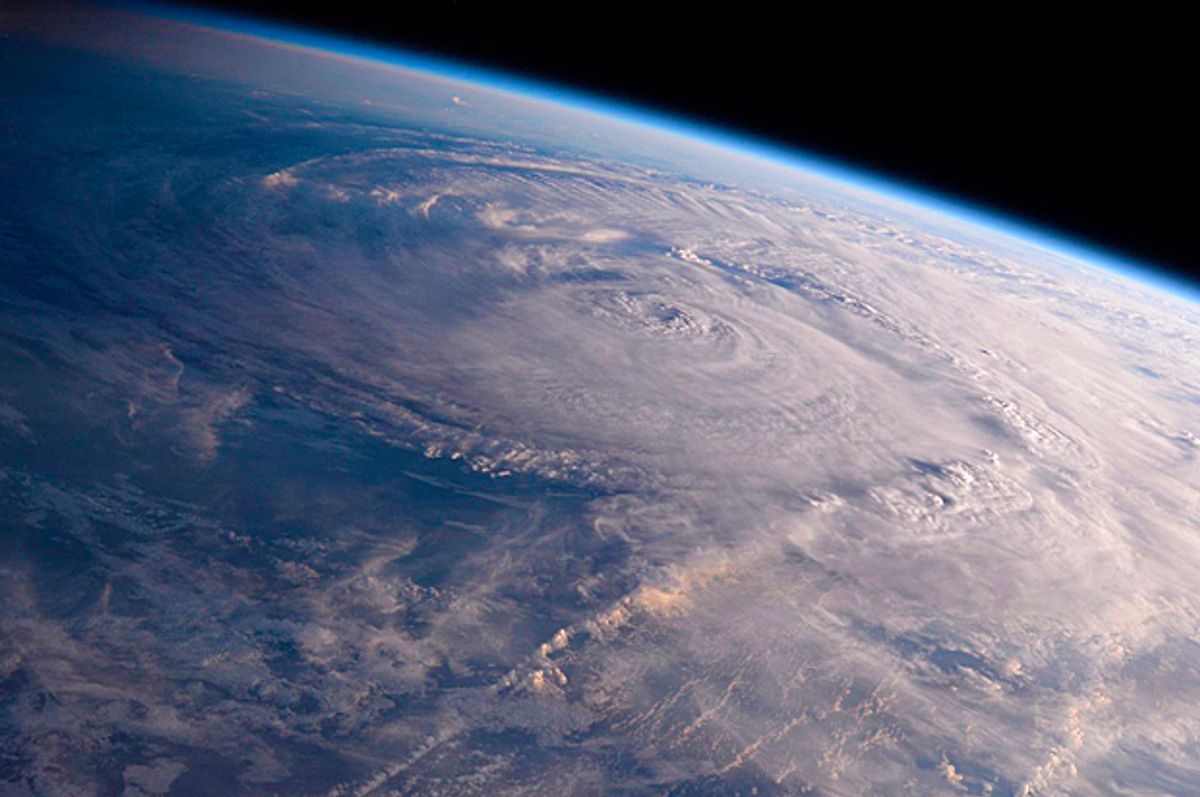 When the National Weather Service announced that Hurricane Harvey had set a new rainfall record for a tropical storm in the continental United States — with 51.88 inches at Cedar Bayou, Texas — that seemed to epitomize just how massive and unprecedented Harvey was. In terms of sheer volume, Harvey's rainfall could fill the Great Salt Lake twice over. It was Houston's third 500-year flood in three years, with the potential to register as a 1,000-year event by its conclusion. As an individual storm, it was unmatched in our history.

Yet, as dire as the figures are, the flooding was far from being the worst ever experienced inside American borders. If you think that Hurricane Harvey is as bad as a weather disaster can get, think again. It not only can get much worse, it already has, all the way back in 1861-2, which saw the worst flooding in history for three different states — Oregon, California and Nevada — while also impacting parts of Idaho, Utah and Arizona.

So how did the Great Flood of the Civil War years compare to Hurricane Harvey? Although it wasn't due to a single storm, it produced more recorded precipitation in one spot — snowfall equal to 115 inches — and enough floodwater to fill one of the Great Lakes. It turned California's Central Valley into a giant lake, 300 miles long and 20 or more miles wide, while also submerging the Los Angeles Basin, along with coastal Orange County. The state capitol was temporarily relocated from Sacramento (then filled with gondolas) to San Francisco, where the state supreme court remains to this day. Parts of Sacramento were still underwater in August. A 2013 history of California flooding from the California Department of Water Resources listed the 1861-2 flood in all 10 of California's hydrologic regions. Even the desert was flooded. The Salton Sea didn't exist at the time, but the flooding created a lake there more than five times the size of the current one. Thousands of lives were lost, in a state with only a tiny portion of its current population.

As for the likelihood or frequency of that event, views have differed wildly. A California-focused 2010 article (“California Washed Away: The Great Flood of 1862”) by meteorologists Jan Null and Joelle Hulbert described it as “at least a 30,000-year event.” A 2005 book, "'Lake Sacramento' — Can It Happen Again?" by meteorologist Leon Hunsaker and geographer Claude Curran, focused on the Yuba River watershed, estimated it would recur “one or two times in 1,300 years.” But more recent work focused on offshore sediment deposits reveals a pattern of similar storms roughly every 200 years, as described in a 2013 Scientific American article, "The Coming Megafloods," by hydrologist Michael D. Dettinger and earth scientist B. Lynn Ingram.

As the title of that article suggests, it's now taken for granted that another such flood will occur. The potential impacts have even studied in detail in the 2011 “ARkStorm Scenario” by the U.S. Geological Survey, which conservatively projected about $725 billion in damages — three times as much as the same team projected for a major Southern California earthquake. “ARkStorm” stands for a 1,000-year atmospheric river storm — though the scenario was actually modeled to be less severe than 1861-2 was. Atmospheric rivers (ARs) are relatively narrow atmospheric regions responsible for most of the horizontal transport of water vapor outside of the tropics. A moderate AR carries as much water as the Mississippi River dumps into the Gulf of Mexico in an average week, while strong ARs carry as much as 15 times that amount.

The Great Flood of 1861-2 is now understood as resulting from persistent weather patterns "configuring air flow into the West Coast to produce strong atmospheric rivers, combined with a series of mid-latitude cyclones," as described by meteorologist Larry Schick, in a presentation at the 2012 California Extreme Precipitation Symposium, which was devoted to that flood and the light it sheds on future planning.

As Schick said, the flooding hit Oregon first, starting with a very rainy October — not that unusual — which continued through November, a more worrying sign. By early December, things turned dire. On Dec, 2, 1861, the Willamette River rose 55 feet above its normal summer stage and flooded the town of Champoeg — the original provincial capital of Oregon Country in the 1840s — destroying most of the structures, leaving it as a ghost town. Two other towns in the region, Lynn City and Orleans, suffered a similar fate.

But California was far more populous, and suffered much worse damage as the flooding continued into the new year. Newspapers from the time provide piecemeal accounts, but the most comprehensive record comes from "Up and Down California in 1860-1864; The Journal of William H. Brewer," written while Brewer was conducting California's first geological survey. On Jan. 19, 1862, he wrote:

This year at Sonora, in Tuolumne County, between November 11, 1861, and January 14, 1862, seventy-two inches (six feet) of water has fallen, and in numbers of places over five feet! And that in a period of two months. As much rain as falls in Ithaca in two years has fallen in some places in this state in two months.

The great central valley of the state is under water — the Sacramento and San Joaquin valleys — a region 250 to 300 miles long and an average of at least twenty miles wide, a district of five thousand or six thousand square miles, or probably three to three and a half millions of acres! Although much of it is not cultivated, yet a part of it is the garden of the state. Thousands of farms are entirely under water — cattle starving and drowning.

In this city 37 inches of water has fallen, and at Sonora, in Tuolumne, 102 inches, or 8 1/2 feet, at the last dates. These last floods have extended over this whole coast. At Los Angeles it rained incessantly for twenty-eight days — immense damage was done — one whole village destroyed. It is supposed that over one-fourth of all the taxable property of the state has been destroyed. The legislature has left the capital and has come here, that city being under water.

Nearly every house and farm over this immense region is gone. There was such a body of water — 250 to 300 miles long and 20 to 60 miles wide, the water ice cold and muddy — that the winds made high waves which beat the farm homes in pieces. America has never before seen such desolation by flood as this has been, and seldom has the Old World seen the like.

It's remarkable how utterly forgotten such a near-biblical catastrophe has become. Even in California, most ordinary citizens have never even heard of this great flood. But the ignorance is even more remarkable, given the larger patterns surrounding it, and what lies ahead.

The 1861-62 series of storms were the largest and longest California storms in the historic record, but were probably not the worst California has experienced. Geological evidence indicates that floods that occurred before Europeans arrived were bigger. Scientists looking at the thickness of sediment layers collected offshore in the Santa Barbara and San Francisco Bay areas have found geologic evidence of megastorms that occurred in the years 212, 440, 603, 1029, 1418, and 1605, coinciding with climatological events that were happening elsewhere in the world. There is no scientific evidence to suggest that such extreme storms could not happen again.

Although the document itself does not stress any political message, there is a clear underlying implication that short-term, individualistic approaches inevitably invite catastrophe. One of 10 key findings, “Those considering flood mitigation should consider ArkStorm,” states:

In the wake of Hurricane Harvey, we are overwhelmed with stories about neighbors, even perfect strangers, helping one another. The same sorts of stories can be found in newspaper accounts from the Great Flood of 1861-2. Even rain-drenched black San Franciscans managed to find a non-discriminatory agency through which to channel their relief contributions to Sacramento. In times of dire emergency, the fundamental reality of our shared morality and shared humanity ceases to be a sentimental backdrop and becomes a guiding principle in how the vast majority of us act. Putting ourselves imaginatively in that situation beforehand naturally leads us to see the world in very different terms.

Hurricanes are relatively capricious, and 200-year AR storms even more so. But sooner or later, they are certain to come — and global warming means that they will come with increased force when they do. Planning to survive the inevitable means making sacrifices to the short-term, individualistic thinker. But it means making investments to the wise. The unthinkable will inevitably happen, and we'll all be better off if we plan our lives, and shape our politics, with that foremost in mind.