Caravaggio the criminal: The violent life and crimes of an artistic genius

Caravaggio was a genius, that's undisputed. He was also a killer and a street gang menace (and a terrible tenant) 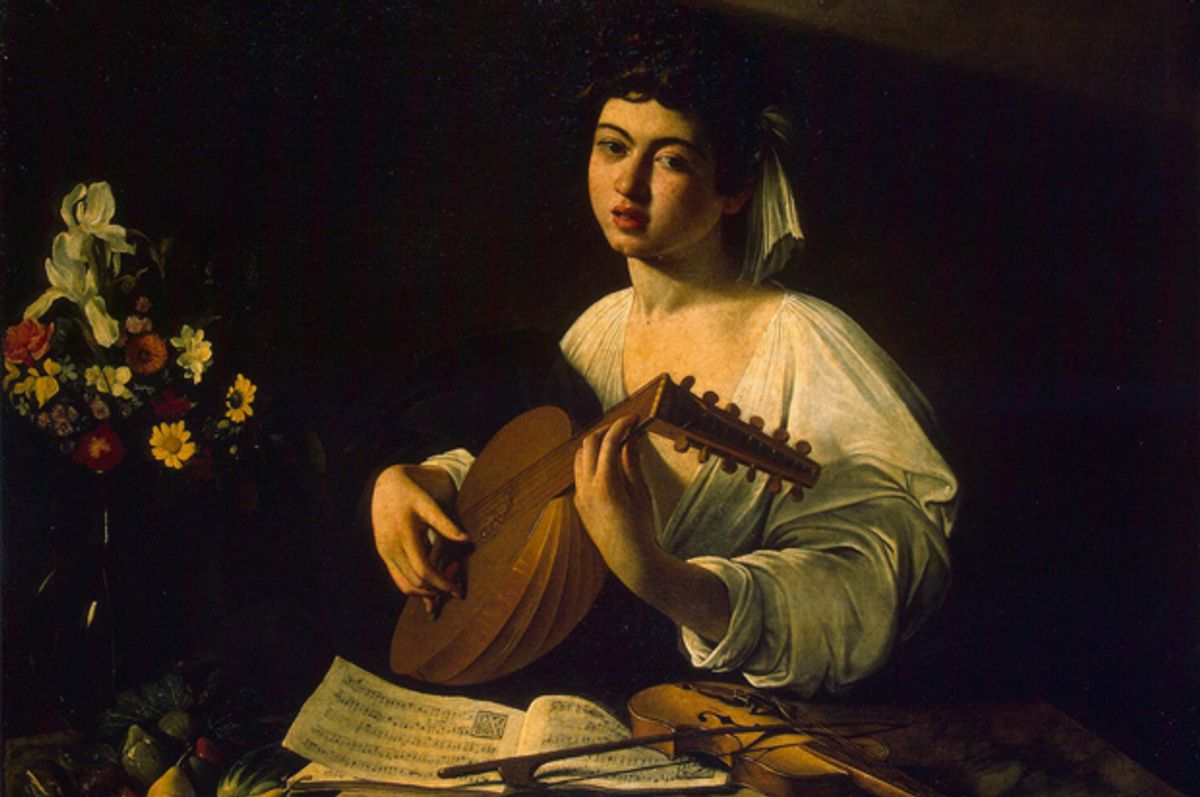 Caravaggio lived a hot, violent fist of a life. Brief, full of angst, upset, blood, death and a total revolution in painting on a scale only rarely approached in other periods in the history of art. Michelangelo Merisi, who got his nickname from having grown up in Caravaggio, near Milan, is one of just a handful of artist who completed changed art, shifted the continuum in a new direction. Along with Giotto, Masaccio, Donatello, Michelangelo, Turner, Picasso and Duchamp (let armchair art historians in the audience suggest who else should be on this list), Caravaggio was a game-changer, invoking a level of naturalism, drama, dramatic use of lighting, and surprising interpretation to religious scenes that turned the art world on its head. But while his art is, rightly so, the subject of enormous quantities of scholarly and popular writing (I once heard that his “Boy Bitten by a Lizard” is the most-written-about painting in history), in preparation for a talk at the National Gallery in Ljubljana, Slovenia, I was struck by the fact that Caravaggio was perhaps art history’s most notorious criminal. We often hear of how he was a difficult character, and of course know that he fled Rome after having killed a rival, Ranuccio Tomassoni, in a fight (possibly over a tennis match, certainly due to gang rivalries, and probably because they were both in relationships with the same women, a prostitute), and spent the remainder of his brief life traveling in hopes of a papal pardon for the murder, rarely is his life as a criminal the focal point.

As a professor specializing in art crime, I usually come to Caravaggio from the standpoint of crimes in which his art was the object. The famous 1969 theft of his “Palermo Nativity” from the church of San Lorenzo, Palermo, which prompted the foundation of the world’s first art police unit, the Carabinieri TPC. Then the amazing, cinematic story of the Dominican priest, Father Marius Zerafa, who almost single-handedly recovered “Saint Jerome” when it was stolen from the cathedral in Valetta, Malta, and held for ransom (told in this magazine). But when I teach art history, I teach Caravaggio paintings as whodunit mysteries. Particularly his “Calling of Saint Matthew” and “Martyrdom of Saint Matthew” fit into the Agatha Christie tradition, the question of which figure is Matthew haunts the former, and who murdered him the latter. Caravaggio inserted “red herrings,” meant to lead the viewer to the wrong conclusion — it likewise led many a tour guide and guidebook writer to the wrong conclusion, as at least half of the guidebooks I read, a portion of the art history books, and even the wall copy in the church beside the paintings in question give the easy answer, and solve these puzzles by pointing to the red herrings. Know enough about Caravaggio, and you’ll see that this cannot be the case (but let the Saint Matthew mysteries be the subject of a different column). Approaching the study of art in terms of detective stories, and then studying detective stories involving works of art, has been my academic focus. But Caravaggio allows in a third component: Artist as criminal.

We know far more about Caravaggio than most pre-modern artists because he was brought to trial so often. Court records have a habit of surviving far better than most, particularly in Italy’s impressive archival system. So while we do not even know the birth year of Hieronymus Bosch, or what Rogier van der Weyden did for the first dozen or so years of his life, we can track Caravaggio exploits in impressive detail. He was also the subject of multiple biographies, including those written by people who knew him. These riches mean that we have a far more three-dimensional portrait of him. And it ain’t pretty.

To put it simply, Caravaggio was a major league asshole. He was also probably mentally ill, as so many people remark on his choleric, ill-tempered, jumpy, unpredictable personality — even those, like Cardinal del Monte, one of his earliest admirers and patrons, who wished him well. His roguish behavior is attested to in many pages of court documents. He was a world-class bad tenant, poking holes in the mansard roof of his apartment to let in natural light — and along with it came snow, rain and swarms of pigeons. He also threatened his landlady, called her names and pelted her with rotten vegetables. His roommate, Sicilian painter Mario Minniti, had enough and moved out, though there must have been something likable about Caravaggio, as Minniti remained his friend and would help him during his sojourn in Sicily.

Caravaggio was almost certainly bisexual, involved in relationships with many women (mostly sex workers), but possibly also working as a young male courtesan in the service of several cardinals who enjoyed such company (and painting portraits of these consorts), and likely in a physical relationship with one of his models, Cecco da Caravaggio. His sexuality is not really relevant to the discussion of his criminal activities, other than to say that accusations of homosexuality and sodomy were cast around him, as both were illegal at the time. But it is often difficult to tell whether accusations were real or fabricated — to get someone into trouble in Baroque Rome, an enemy might accuse you of homosexuality, whether or not it was true. But his bad temper is undoubted.

He threatened to beat up painters who imitated his style. He did beat up a waiter, ostensibly for having served him a plate of overcooked artichokes. He was looking for trouble, courting it. He used, as a model for the Virgin Mary in his “Madonna of Loreto” painting for the church of Sant’Agostino, in Rome, a prostitute friend of his. But this prostitute used to solicit clients on the street in front of the church of Sant’Agostino, so it didn’t go over so well when the locals would walk past her on Sundays, on their way to mass, then see her portrayed as the Madonna inside the church. His “Death of the Virgin” employed, some have said, as the model for the body of Mary, the corpse of a prostitute that Caravaggio saw dredged out of the Tiber River. There is some thought that he intentionally made works that church commissioners would find “indecorous,” not appearing as they had expected, and which they would reject. This meant that Caravaggio kept the advance on his commission, but then could quickly sell the finished, rejected painting to a private buyer, for far more money than the church was offering.

From 1599 on, the appearance of his Saint Matthew Cycle, his first large-scale public commission, Caravaggio was the toast of Rome, the most popular avant-garde artist in south-central Italy. He was also extremely religious (which, alas, history shows is entirely compatible with being extremely violent), and followed the recommendations of the Council of Trent — that emergency meeting of the Catholic church to determine how to combat the Reformation — to an extent that was beyond what commissioners expected. The Council encouraged a deeper meditative experience by imagining a biblical scene in the present day, but Caravaggio shocked when he painted biblical figures in the attire of Rome circa 1600.

We tend to think of painters as perhaps somewhat effete, low-key types, the occasional Jackson Pollock aside. But Baroque painters were a badass bunch. There were street gangs of painters, with a particular rivalry between Dutch painters living in Rome and local boys. Caravaggio was involved in gangs and gang street fights. He carried a sword, which was illegal if you were not an aristocrat, and he had it inscribed with a decidedly badass phrase, which translates as “Without hope, without fear.” And it was likely a gang dustup, coupled with affection for the same prostitute, that led to his maiming, and the subsequent death, of Ranuccio Tomassoni. It was recorded that the fight was over a tennis match, but scholars have found that it was not a straight murder, but rather a very personal attack. Tomassoni’s genitals were mutilated, and he died subsequently from the wounds.

Caravaggio was obliged to flee, or face trial for murder and capital punishment. He was under the protection of some powerful aristocratic patrons, including the Colonna and Del Monte families, but there was only so much they could do. In Rome, only the pope, who there was the equivalent of the king, had the power to pardon a murderer. And so Caravaggio fled, always hoping to return if a papal pardon could be secured.

We’ll continue the story of Caravaggio’s crimes in part two next week.