Producer David O. Selznick griped and moaned throughout production of this fascinating flop rereleased by Criteron 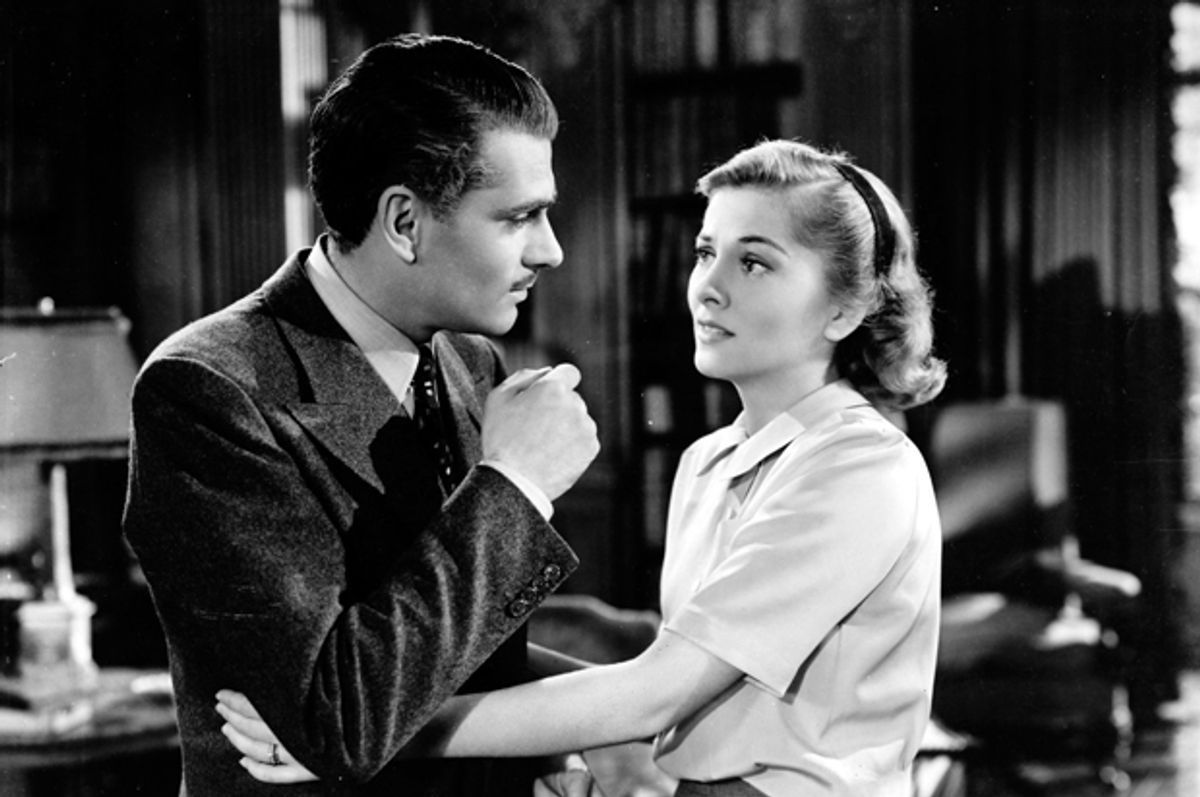 When Alfred Hitchcock came to America in 1939 to make "Rebecca," his first stateside picture, he was something of a swashbuckling, albeit in a roly-poly manner, auteur.

For a decade plus, Hitchcock had made pictures like no British director ever had, going back to 1927’s "The Lodger," his first fully realized burst of creative glory, and on through "The Man Who Knew Too Much" (1934), "The 39 Steps" (1935) and "The Lady Vanishes" (1938). Talk to some Hitchcock diehards, and you will encounter more than a few suspense cineastes who consider Hitch’s British period to be his most fecund, with everything starting to go down the backside of the slope in the States.

Now, this is silly, of course, given the roll call of masterpieces in the 1950s, even if someone like Orson Welles would titter over what he considered the ludicrousness of 1958’s "Vertigo," the film that now sits atop the vaunted Sight and Sound poll.

But Hitchcock’s second career act got off to an odd start with his cinematic treatment of Daphne du Maurier’s 1938 novel, which has just been released by Criterion in a Blu-ray edition that hammers home just how damn gothicly sumptuous the whole thing was.

If you watch Hitchcock films, you know he didn’t really do sumptuous. He could do ornate, but that’s different, as something can be ornate and yet not showy, with its component parts, assorted levers, various cross-stitches, tucked into assorted filmic folds, like with the amazing set on "Rear Window" or the grizzled, would-be mansion that was more like a former down-on-its-luck brothel that served as Norman Bates’ home in "Psycho."

But you know who did do sumptuousness? Producer David O. Selznick. Selznick’s pictures tended to be huge and epic, like "Gone With the Wind," "A Star Is Born" and "David Copperfield." If any flourish might be added to a veritable room of flourishes, Selznick was going to add it. You might say he was a guy who put business before everything, and who sometimes made art without that being his first intention, whereas Hitchcock reversed those polarities, being a director who thought in terms of art and the audience’s engagement with art, which ended up making loads of money.

Hitchcock is perhaps the only director I can think of, along with Orson Welles (and a 1938 radio adaptation by his Mercury Theatre is included among the bonus material), whose films defy categorization. You don’t want to call them horror, nor thrillers, nor noirs, though they can scoop some qualities off the top of those genres. A Hitchcock picture is Hitchcockian, and it’s going to be that no matter what, even when working with someone like Selznick. Selznick’s hand, though, assured that the picture could not come out unadulterated, which means in the case of "Rebecca" we have an interestingly unlikely Hitchcock film, something you might even term a failure, and certainly nothing in line with a proper Hitchcock masterwork.

The plot has the requisite darker elements of an episode of "Alfred Hitchcock Presents" — the TV show that ran from ’55 to ‘62 on which Hitchcock could freely indulge his demons, having the clout by then — all nicely ladled into what appears a Hitchcock-designed broth. Joan Fontaine plays “the second Mrs. de Winter,” who marries Laurence Olivier’s Maxim de Winter. The latter had a wife named Rebecca whom he was supposedly deeply in love with who died. He’s apparently still in love with her, obsessed with her, even, and his new bride doubts his affection for her, thinking she’s just a replacement for a true love, a wife as figurehead for that which cannot truly be replaced. In a nice Hawthorne-esque flourish, the letter R is on seemingly everything, including the doors to the master bedroom, to help get our newlyweds in a most creep-tastic mood for their dalliances.

We don’t need to give away the entire workings of the plot, but if you haven’t seen the movie, let’s just say that Larry Olivier didn’t quite feel the way we at first think he did for his allegedly beloved Rebecca, there was a pregnancy that wasn’t a pregnancy, a suicide that wasn’t a suicide that wasn’t murder either, a meddling housekeeper, and a scuttled boat that contains an object that could undo the actual love of this legit second marriage.

Going by plot alone, in terms of its emotional valiance, this is such a Hitchcock picture, but Olivier was not the kind of actor the director usually employed. He is florid, entirely baronial and elegant. You watch him, and it’s hard not to envision him busting out into some lines of Shakespeare. The coastal setting, the Gothic manse, the wind-lashed coast of ancient times with the sprites all but dancing about — this was not Hitchcock’s métier. He upped the acidity, in an attempt to buck against his own production while still keeping it intact, which you always had the sense was a case of the director saying to himself, “OK, get through this first picture contract, play their game a little bit, then after you can go back to doing your thing, but with better sets, better cameramen, just like back in England, but, you know, better.”

Selznick, though, was both a master worrywart and a lachrymose complainer who could turn a blister into a life-sucking abscess. “It is my unfortunate and distressing task to tell you that I am shocked and disappointed beyond words by the treatment of 'Rebecca,'” he wrote to Hitchcock in one of his famous — or infamous, depending upon which camp you stand in — memos to the director in June 1939. “I regard it as a distorted and vulgarized version of a provenly successful work.”

That notion of “vulgarized” was one that would have caused Selznick no little pain. Tarnish was not his thing; but tarnish was always Hitchcock’s and it is tarnish that makes up much of life — actual life — and not gloss.

We are still in the era of the studio picture at the time "Rebecca" was being made. Hitchcock had come up through the studio ranks — for England featured a studio system as well — but this was a not a studio kind of guy. The problem was, the auteur movement had yet to happen, to say nothing of the indie film movement, but neither would probably have happened at all without Hitchcock, or, at least, they would have happened rather differently.

The challenge was making your work with its pronounced individualistic slant, in a milieu that favored confreries over a person who could say, right, this is how this is getting done, off we go. Hitchcock didn’t think much of Fontaine’s acting chops — which also meant he was having a hard time cajoling/bullying/intimidating her into the performance he wanted — and he thought less of Selznick’s memos. Their tone is, at least, uniform. “I am very disappointed in the second-unit stuff on the opening sequence.” “In today’s rushes I was a little disappointed ... ” “Today’s rushes were, I thought, all right, but frightened me from the standpoint of tempo more than any we have had so far.”

Quite the hothouse orchid. Albeit one who was also great at his job, and needed to be given his own head just like Hitchcock did. This was not a Bogart/Bacall movie partnership, or Welles/Toland, Lewton/Tourneur. These were two dudes who should not have been working with each other.

So what ends up happening? Well, we have this fine Criterion release to evaluate the end product once more, and what we get is something that looks like an Edwardian ghost story from a British Christmas annual blown up to big-budgeted proportions and turned into a costume drama by the sea, with an underpinning of great tension and unease.

One of Hitchcock’s chief skills is making you double back on yourself as you watch his pictures, just as his characters do. His films, "Rebecca" included, are peppered with pauses, beats where characters stop to think, we stop to think, to reassess. Hitchcock was the cinema’s version of jazz pianist Ahmad Jamal, creating so much meaning in so many telling silences. When Joan Fontaine’s character doubles back on her own inclinations and conclusions regarding her new husband, we do the same, realizing that truth is so rarely what we take anything to be at first blush.

A Hitchcock film makes you feel like real discomfort always awaits, that you are going to have to see something, and, worse, think something, you know won’t be a hunky dory thing to see and think. Those blows never come quite like you expect them to, so that the prevailing sensation is one of anticipation, of curiosity spread out wider and wider until something uniquely Hitch-worthy is delivered.

That also works as a metaphor for life, depending upon how you live it. But it’s also why the director, even with the most outlandish plots, could always feel like he was tapping into something born of the everyday. That feeling is a little more schizoid in "Rebecca." Your skin is aquiver, but in a less orchestrated way — that is, you sense that Hitchcock has less control over us than he would like — and more in the manner of genius plowing through obstacles and having its effect by way of reflection, rather than full-on, uncensored rays.

With Hitchcock, you always want those rays, but even when they come secondhand, they’re still bright enough to light up an old Gothic manse. But how he must have wanted to throttle his boss, which could make for a different Hitchcock picture.