This is your developing brain on white supremacy

Participants in white supremacist violence are are overwhelmingly young, and predominantly male. Here's why 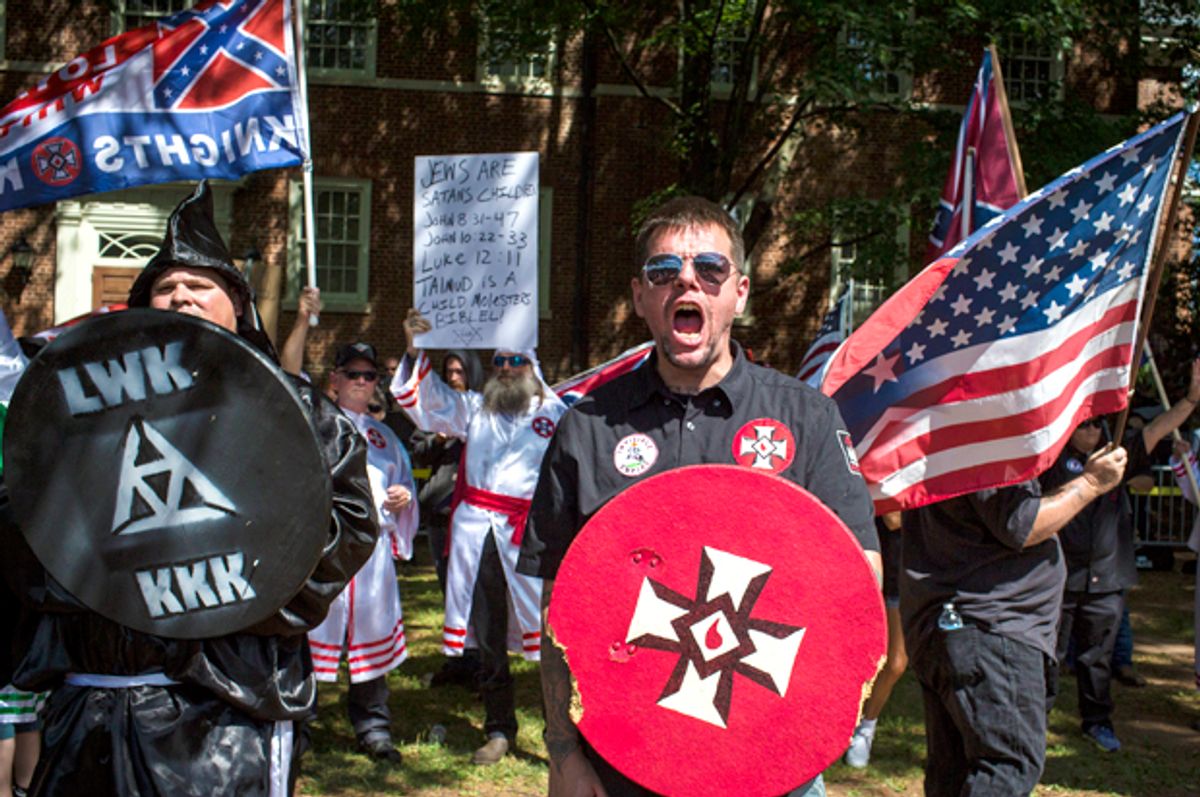 The white supremacist uprising in Charlottesville shocked the nation, which watched with horror the angry, racist chanting, the threats of violence against groups seen as “the other” — and the use of a car as a terrorist weapon. The many parallels to Jihadist extremism are impossible to miss.

There is another significant convergence that often escapes our attention because it is so obvious: participants are overwhelmingly young, and predominantly male. Why? Research reveals deep similarities in the mindset driving these actions: strong social connections to comrades who see their cause as “sacred”; recruitment that appeals to adolescents and youth who are disconnected from and who feel disrespected or threatened by the larger society; and the influence of authority figures who provide validation.

Although active participation in extreme groups and activities, including violence, has many sources, we shouldn’t overlook recent research on brain development showing that “capturing the passion” is a central characteristic of adolescent and youth development – and that offer clues to how we can capture this passion for positive social goals.

The remedy: Capturing the passion for positive social goals

Dismissing violent extremism as inexplicable, or as mere moral failing (abhorrent as the behavior may be), blinds us to the fact that focused efforts to actively capture youthful passion do actually work. We need to realize that the core aspects of typical development that make individuals susceptible to recruitment by extremist groups – active engagement, connection, and meaning — are also major sources of resilience against stress.

Similarly inspired efforts on behalf of positive goals that offer social connection and meaning in a highly stressful time could capture this passion as well or better, making use of the same developing neural circuits. Much of this is already going on, in youth-inspired movements around climate change, resistance to authoritarian models, and social justice issues like inequality and mass incarceration. But adults need to do more to support these movements, especially in terms of inspirational leadership explicitly aimed at capturing youthful passion on behalf of progressive social goals. Making it clear to adolescents that they matter in the eyes of adult role models, and that their efforts matter for achieving meaningful goals in the wider world, are essential counterweights to growing extremism.

Also important: understanding better the perspectives of those segments of youth who feel disconnected, disrespected and threatened by social forces that they don’t control. As much as we loathe the angry chanting of “You will not replace us,” it will be important to understand what lies beneath this perception of threat — however contrived and magnified by demagogic leaders that sentiment may be. Confronting those views is an essential first step, but we need to go beyond that by ensuring that all adolescents and youth have viable pathways to success — a goal that is unfortunately far harder to achieve in our era of high inequality and low social mobility.

Daniel Keating is a professor of psychology at the University of Michigan. His research focuses on neurodevelopment, stress, and risk behavior. His most recent book is "Born Anxious: The Lifelong Impact of Early Life Adversity — and How to Break the Cycle."