A vegan's confession: Once, I was the chicken wing-eating champion of Ithaca, N.Y.

If it could be killed, butchered, baked or barbecued, there is a very good chance I ate it at one point in my life 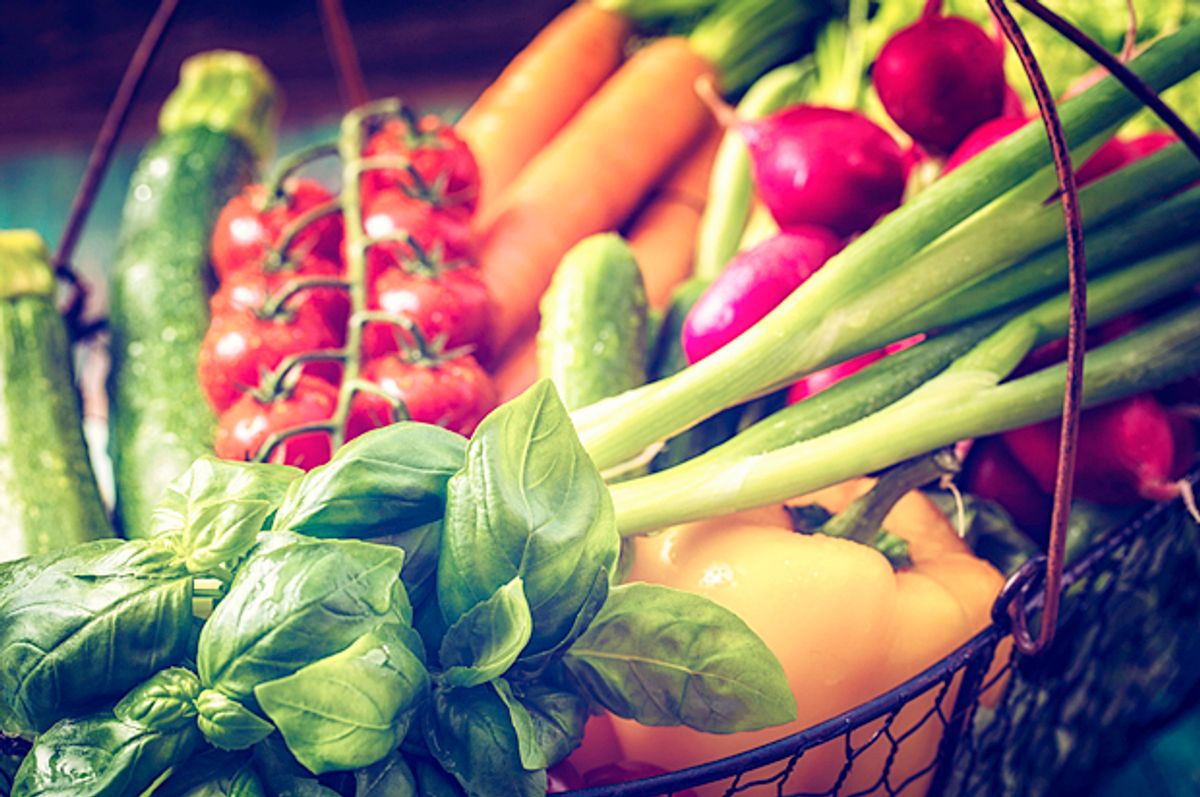 Excerpted with permission from "The Skeptical Vegan" by Eric C. Lindstrom. Copyright 2017, Skyhorse Publishing. Available for purchase on Amazon, Barnes & Noble and IndieBound.

It was the best of times, it was the wurst of times. Beef. It’s what was for dinner back then. Night after night. The rarer the better. Pittsburgh rare. I used to say to my waiter, “Just lob off the horns and send the cow to my table.” Back then, I was influenced and guided by mass media, the Standard American Diet (SAD), and my own upbringing. Throughout many of those years, I found myself mentored by some pretty amazing university and hotel chefs who taught me proper cooking and grilling techniques, as well as savory recipes that inevitably were plated around meat. The “protein on the plate.” If it wasn’t beef, it was chicken. If it wasn’t chicken, it was pork. Once a year, it was turkey. On Friday, it was fish. I ate shark, octopus, conch, lamb, goat, deer, duck, goose, squirrel, bison, and even bear. If it could be killed, butchered, baked, or barbecued, there is a very good chance I ate it at one point in my life. For the record, and in case this book winds up in the hands of the FBI, I never ate an eagle. At least not a bald one.

The year was 1995. Ithaca, New York. My friend Matthew, a gentle, bearded, tender-bear man with a ponytail halfway down his back, who stood nearly seven feet tall and weighed approximately 280 pounds, heard about a local restaurant offering a Thursday night special: “All You Can Eat Buffalo Chicken Wings. All You Can Drink Beer. $6.95.” The Collegetown joint was called The Alamo Restaurant, and ironically, I do remember it.

Back then I was notorious, almost legendary, for my chicken-wing-eating prowess. I was a seasoned “bone cleaner.” I could pull the meat off a wing or a drumstick and slurp down the entire hot mess in one bite (while only utilizing three fingers to do so). A friend of mine once asked me to “show him my trick” for eating chicken wings, and I replied, “It’s not a trick, it’s how you properly eat a wing.” I immediately unfriended him.

Matthew and I (also, ironically) walked up Buffalo Street, toward Cornell University, and found our way to The Alamo. We took a window seat overlooking the bustling streets of Collegetown, the miniaturized version of Ithaca’s downtown that abuts the Ivy League university. A pimply-faced server approached our table, handed us menus, and introduced himself. “Welcome to The Alamo. My name is Simon. What can we rustle up for you in our chuck wagon, pardners?”

Not looking up, I held the palm of my hand toward the naive teenage boy and willed the menus away like Obi-Wan Kenobi. “We’ll have the all-you-can-eat, all-you-can-drink Thursday night Buffalo chicken wing-and-beer special,” I said, with a little drip of saliva finding its way out of my mouth. I was waiting all day to say this, having memorized the promotional poster since Matthew first mentioned it. I ended the order with an Elvis-style “Thank you, thank you very much.”

The boy rolled his eyes and walked away.

The waiting was always the hardest part. Anne Morrow Lindbergh once said, “The sea does not reward those who are too anxious, too greedy, or too impatient. One should lie empty, open, choiceless as a beach—waiting for a gift from the sea.” She was probably a vegetarian and had no idea about the glory of a chicken wing.

That steamy, crispy, fried outer skin slathered in Frank’s hot sauce with melted butter, plunged deeply into a bath of cool bleu cheese dressing. It was about as sensual a food as you could get, and I loved it.

Moments later, the server placed a basket of twelve Buffalo-style wings in front of each of us, along with celery sticks, the aforementioned requisite bleu cheese bath, and a pitcher of beer. Labatt’s. The aroma from the steam burned the inside of my nose slightly, and the red orange-slathered skin glistened in the setting Ithaca sun. Matthew and I looked longingly at each other, and then more longingly at the wings. We nodded to each other silently and dove in like Greg Louganis at the 1988 Olympics. By the time the server returned to see how we were doing, we were already prepared to demand our next round. That first batch took roughly five minutes to consume. They didn’t know who they were dealing with.

“A dozen more,” I said, pointing up my three sticky fingers. The server glanced over to Matthew for his response. He simply nodded and smiled with a trace of wing sauce outlining his lips and signaled for another basket by holding up a single bone. Nothing good was going to come from this.

To the amazement of the server, and management, this went on four more times over the course of a couple of hours until we were finally in the home stretch to consume a total of seventy-two wings. Each. In one sitting. I eventually bowed out at just sixty-eight wings, leaving the last four to escape uneaten. But no less dead than their unfortunate compadres.

The Alamo went out of business the next week.

A year before that, I had made a pilgrimage to the Anchor Bar in Buffalo to visit the site of the original chicken wing. This is where it all started. It was like going to Graceland. This was sacred ground. I often wonder if The King loved chicken wings as much as I did. But I digress.

Now, what I didn’t consider at the time, and something that would take almost thirty years to understand, is that seventy-two wings equals a total of thirty-six dead chickens. And when you count how many Matthew ordered and ate, that one fourteen-dollar meal required the hatching, raising, killing, and butchering of seventy-two innocent birds. Now multiply that by the number of patrons just during that one evening, and you’re probably looking at approximately five hundred dead chickens in one small restaurant in small Collegetown up the hill in Ithaca, New York.

Let that sink in.

As a comparison, the national franchise Buffalo Wild Wings sells, on average, twenty million traditional wings each week. Each. Week. That’s 260,000,000 (two hundred and sixty million) dead chickens per year all from a single franchise. This number is astonishing. And this particular franchise has now opened locations in Canada, Dubai, Qatar, and Saudi Arabia. The carnage is global.

Of course, back in those days, I never once stopped to think about the carnage. I was too enthralled with eating meat. This love for meat eventually found its way into my career.

The midnineties were an exciting time to be an entrepreneur. eBay had just become popular, and websites for online shopping were popping up everywhere. I was sure my friend Mike and I were going to be the next tech millionaires. We had the talent, time, and ability to build an online brand and create a marketplace for a line of products with universal appeal. Move over Internet Shopping Network and Amazon, and make way for MeatBucket.com.

MeatBucket.com was your one-stop specialty online shop for everything meat. Your purchase was shipped in a collector aluminum bucket. Customers would visit the site and drop beef jerky, dried beef, smoked boar, Slim Jims, barbecue sauces, etc., into their designer bucket and click “Add to Bucket.” They then waited two to three weeks for their meat bucket to arrive. If you acted “now,” your order would include a free set of logo toothpicks. Needless to say, MeatBucket.com was even less successful than Pets.com (“because pets can’t drive”). We didn’t even come up with a sock puppet mascot. But my commitment to meat was clearly evidenced in this project. Meat was part of me. It was as if I were made of meat myself.

Set the dial on the DeLorean ahead another decade to my fortieth birthday celebration. While there were plenty of slender slabs of meat served on skewers, barbecued bits of bite-sized beef drenched in teriyaki sauce, and bartenders boasting bacon martinis, the highlight of the event was, fittingly, the meat cake. An oversized meatloaf with mashed potato “frosting,” professionally piped with gourmet catsup punctuating the perimeter. When that meat cake came out, aglow with candles, I have to admit that I started to cry a little. Not because I had reached a birthday milestone, but because I was so overwhelmed with joy that my cake was made out of meat.

I would eat chicken three nights a week, steak two nights a week, and pork the other two. If there were more days in the week, I’d simply find more meat to eat. If you stop to think about it, there is an endless supply of meat. Right? Keep eating meat, and the meat industry will keep supplying it.

Back in those days, meat meant the world to me, and, eventually, my waistline and heart rate would pay for it.