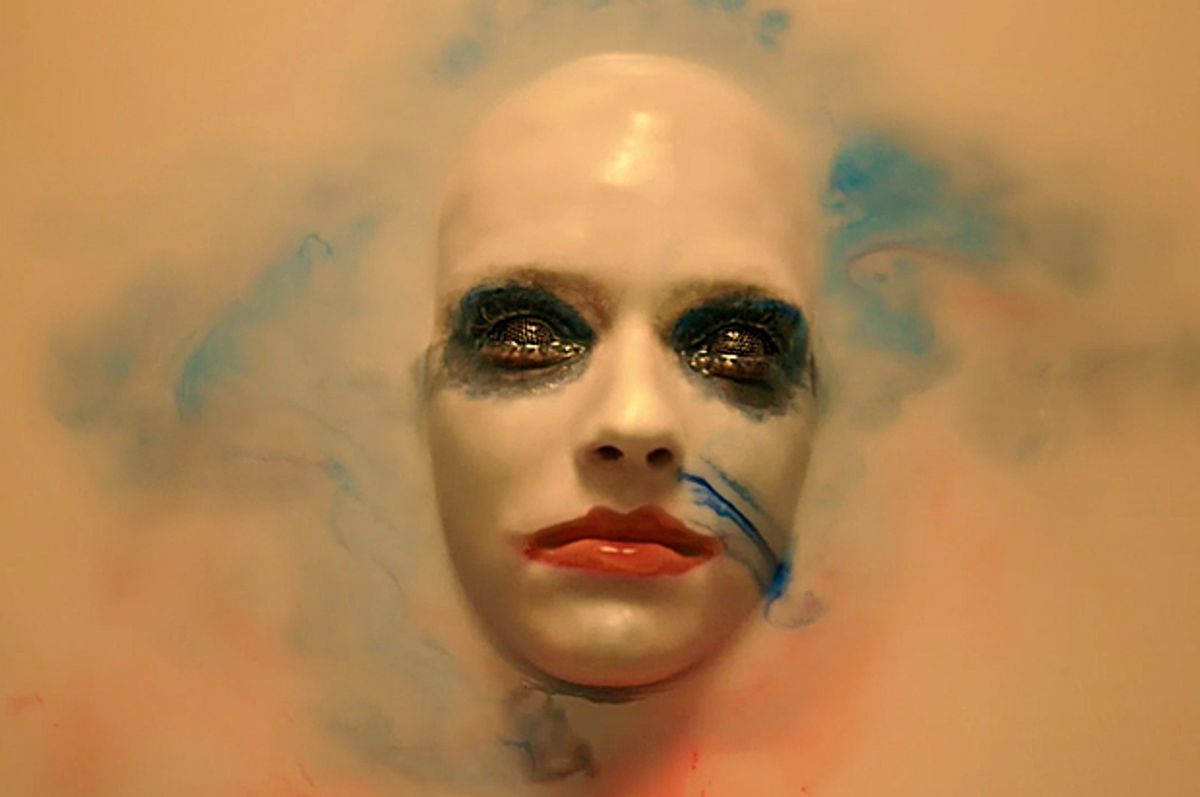 The calls are coming from inside the house, America.

This urgent message is brought to us by “American Horror Story: Cult,” heading into its seventh season Tuesday at 10 p.m. on FX. As you may have heard, this season’s fright is an all-too-familiar one: co-creators Ryan Murphy and Brad Falchuk drew inspiration from the mass derangement leading up to the 2016 presidential election in writing it, the devilish event that resulted in the election of Donald J. Trump. Though the president is not explicitly portrayed in this chapter, his bloated specter looms large over the season, as does the ghost of Hillary Clinton along with the noxious wraith known as Jill Stein.

The show’s Michigan setting explains why there’s snow on the ground, although snowflakes nervously dance about even on the clearest days — it’s snowflakes, snowflakes all around. The air vibrates with wailed accusations of racism, white privilege and trigger warnings alongside the low drone of baseless fears of illegal immigration and false reports of increased rape and murder rates. All this buzz is mere background noise to the deadliest menace of all: Clowns.

Assessing the success of “Cult” is oddly challenging. The three episodes provided for review aggressively attempt to touch upon every societal poison eating away at our culture in short order. This means that by day the main players — portrayed by Sarah Paulson, Alison Pill, Evan Peters and Billie Lourd — are irritating, repugnant or excessively bewildering caricatures. Come nightfall, they’re either avoiding the cleaver or somehow related to a group of hunters wearing clown masks, who are waging a campaign of dread upon an upscale Middle American town.

“Cult” is where the hysteria of social media meets the splatter subgenre of horror, in other words. And it’s tough to predict whether that combination will ultimately prove to attract or repulse.

Murphy and Falchuk tend to adopt a kitchen sink approach with every season of this series, tossing together a kettle full of loose ends and red herrings with varying amounts of success. “American Horror Story” is most cohesive and surprising in its “Asylum” season, with subsequent outings sagging under the weight of their cameos and a somewhat mawkish adherence to archetypes. “Coven” and “Freak Show” makes up for their shortcomings with all-star casts — Kathy Bates! Angela Bassett, Jessica Lange, again and again! — while the meandering “Hotel” builds the scenery around Murphy’s massive celebrity get, Lady Gaga.

At least the ambitions of “Cult” reach beyond a reliance on a familiar setup: Woven through the first three episodes is commentary, spoken and implied, about our recent tendency to isolate ourselves and fear our neighbors. (So far there’s one notable guest star signed on to this season in Lena Dunham, who shows up in the seventh episode as Andy Warhol’s would-be assassin Valerie Solanas.)

But “Cult” also adopts a harsh view of elitist left-leaning arrogance and the surge of rudderless alt-right rage fueling some of the politically and economically disenfranchised. Everybody’s losing it.  Everybody is afraid.

“Cult” doesn’t make its heroes or villains obvious adherents to a specified ideology. In fact, Paulson’s Ally Mayfair-Richards is such a quilt of ultra-liberal, self-policing righteousness that at times it’s difficult not to root for the circus freaks terrorizing her. She’s also a mess of phobias — deeply afraid of holes, of blood, of animal dander and politically incorrect language and ideology. Her therapist, played by Cheyenne Jackson, comes across as a gentle forbearing soul.

Evan Peters’ Kai Anderson is the opposite of that. A charismatic fiend molded to resemble Charles Manson, David Koresh, Jim Jones and, yes, Warhol, Kai is a stand-in for every 4chan-loving degenerate devoted to Making America Great Again.

“American Horror Story: Cult” may not be expressly about Trump, but the image of Kai celebrating his victory by humping his television and painting himself in Cheeto paste indicates otherwise. If we are afraid, it is because we elected a crazy clown with very small hands, wearing a too-long tie and oversize shoes. That’s what keeps us up at night.

The topmost fright this season, though, is fear itself, and fear’s power to make fools of us all. The 2016 presidential election weighs heavily upon these opening episodes, and maybe weaving conspicuous political commentary into a horror framework is the medicine “American Horror Story” fans have been craving to make sense of the ever-refreshing array of daily stressors.

If this season’s characters say and do the idiotic things we’d expect horror movie victims to do, it’s because fear has made everyone stupid. If the cops ignore the strange motivations behind a string of attacks on Ally, her wife, Ivy (Pill), and their young son, it could be because they’re overwhelmed. It could be that we simply don’t want to expend the energy to protect lesbians or people of color. Or they could quite reasonably choose to doubt the woman who claims to see knife-wielding harlequins everywhere.

“It’s so easy until it’s you they’re coming for,” says a “Cult” character. And while one would expect such wisdom from the tale’s hero, it actually spills from the lips of the aggressor.

The writers aren’t entirely serious about all this because “American Horror Story” never is. Billy Eichner and Leslie Grossman shoulder much of the comedy in the first few episodes, playing a couple who would seem to have much in common with Ally and Ivy but soon reveal themselves to be impossible to pin down. But even one of the scariest moments in the season premiere contains a tongue-in-cheek joke, as a shrieking Ally fends off her masked attackers by wielding bottles of rosé.

Murphy and Falchuk’s horror anthology has a devoted fan base that must be champing at the bit to follow every step of this madness, partly owing to the lure of this season’s connection to the “Freak Show” chapter through the resurrection of Twisty the Clown. Lourd’s Winter is reminiscent of Moira O’Hara, the first season’s sinister and raunchy ghost maid, the difference being that Winter is the Mayfair-Richards’ babysitter. Every slasher flick requires a babysitter.

The rest of us may balk at watching the low-level state of alarm we exist in distilled and amplified into a serialized shock fest. Horror can have a way of disempowering reality-based fears, but only if they’re farfetched and unlikely enough to allow us to view those adrenaline spikes as treats. The fears fueling “Cult” are internal and externalized in an intensely gruesome fashion. It feels like just the ticket at some points, and at many others, seems too unsustainable to bear for an entire season.

Its relative appeal, then, feels like a moment-to-moment determination. As one character puts it, “People are going to believe what they’re going to believe. The trick is, figuring out what they want to believe and then giving it to them.” And isn’t this notion what got America into the mess we’re in now?