Labor Day heroes: The 7 most pro-union comic books ever made

Yes, when they're not saving the planet, some of your favorite superheroes have stood up for workers' rights 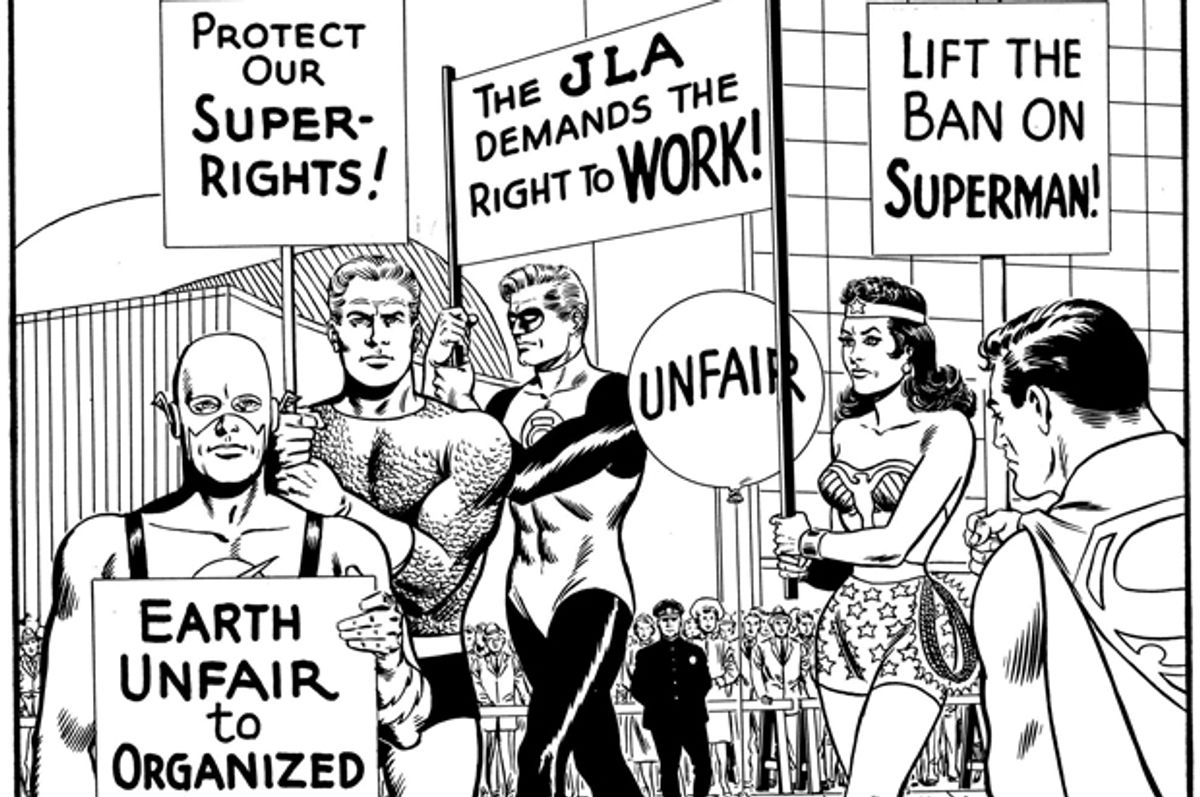 Comics books have a long history of supporting causes: most notably, the anti-Nazi cause, as seen in covers recently immortalized in “Take That, Adolf!” by Mark Fertig.

The large number of Jewish creators was a big reason why comic books were ahead of the curve in worrying about Hitler. Unfortunately, those same creators have been treated like garbage for most of comics history. They've often been forced to sign away what would become billion-dollar properties for pennies while having no job security or benefits. There’s a reason so many creators and fans support the Hero Initiative, which gives money to down-on-their-luck creators.

The sketchy labor practices of the comics industry are probably why there isn’t going to be any coffee-table mega-collection of pro-labor comics; the issue hits a little too close to home for most publishers. But in the vast history of comics, there have been some creators and companies who tackled the topic, sticking up for the rights of workers, whether through the most famous superhero of all or an independently produced series about henchgoons dressed as bowling pins.

So, in honor of Labor Day, here are some comics that would make a union steward proud.

"Action Comics"
In the early days, Superman wasn’t fighting weirdos like Bizarro or aliens like Brainiac: He was standing up for the little people, including workers. With his crusades against abusive husbands, negligent landlords, corrupt businessmen, mob bosses and other down-to-earth scumbags, Superman was not only the original superhero, but also the original social justice warrior, minus the sarcastic connotation. Superman was famously a champion of truth, justice and the American way — and that included workers.

"C.O.W.L."
This recent Image Comic, written by Kyle Higgins and illustrated by Alec Siegel, has something that’s hard to find: an original spin on superheroes. The spin was a superhero union — the Chicago Organized Workers League — that was founded about 15 years before the events of the series, which take place in 1962. The series shows the spandex crowd dealing with the difficulty of maintaining unity when there isn’t a prominent villain around, which echoes actual union struggles to stay together over time. Siegel’s beautiful art (which is a little reminiscent of the work of the great Bill Sienkiewicz) makes this a gorgeous as well as a complex story.

"Henchmen"
This comic (written by Jamison Raymond and illustrated by Ryan Howe, co-created by Brian Wyrick) could have ended up another woe-is-me tale about another straight white male. Schlub  Gary Harrison does have plenty of woe, including a failed marriage and a lost job. But when Gary starts taking jobs as a henchman, he becomes something more than another lowlife working for the gloriously named Head Pin of crime. Gary experiences firsthand the plight of the henchman: treated as cannon fodder for ridiculous villains in their never-ending battles with superheroes and the police. Gary ends up leading a henchmen union to improve the lot of his fellow crooks — and to stave off the inevitable adoption of henchbots (talk about a relatable storyline). Much like Zander Cannon’s Kaijumax — an insane story about giant monsters in prison that is also a sharp look at police brutality, racism and other issues— “Henchmen” uses a bizarre premise as a Trojan horse for an ode to solidarity.

"Justice League of America"
1964’s JLA #28 has a famous cover that plays on labor issues, using the visuals of strikes to tell a story that could be the plot of a 2017 superhero movie. The memorable cover features JLA mainstays the Flash, Aquaman, Green Lantern, Wonder Woman and Superman holding picket signs such as “Lift the Ban on Superman!” and “Earth Unfair to Organized Superheroes!” But the supes aren’t trying to get their jobs back, just the right to use their powers. The U.N. banned super-shenanigans after the JLA almost caused a disaster while battling D-list baddie Headmaster Mind. This complication made for an ahead-of-its-time plot and respectful tip of the hat to the labor movement.

"Invincible"
Robert Kirkman and Ryan Ottley’s long-running, creator-owned superhero comic “Invincible” has taken a crack at just about every aspect of corporate superheroes, including the sidekick, the arch-nemesis, the hero turning bad and the superteam. At one point, Kirkman and Ottley explored a different sort of team: Capes. Or rather, Capes Inc. This super-team is a business with better-than-average business practices, including overtime for those days when saving the world just doesn’t fit inside your shift. Overall, it points to the ridiculousness of superheroes and the necessity of treating workers right.

"Lazarus"
This Image Comic by Greg Rucka and Michael Lark is a dystopia that feels frighteningly around the corner. In this dystopian near-future, wealthy families have replaced governments as the power in the world. If you’re part of a family, your life is pretty sweet. Otherwise, you hope to be useful enough to be serfs, who are basically the middle class. Serfs have no job (or life) security either, but they’re taken care of as long as they’re useful. The rest of the population —in other words, most of the population — are waste. Waste are lucky to survive their precarious existence, which is dependent on scraps of food and resources thrown down by the families. Of all the fictional worlds, this one might need unions the most.

"Wobblies! A Graphic History of the Industrial Workers of the World"
If you’re looking for sequential literature that takes a more direct look at unions, look no further than this nonfiction graphic novel, which looks at the adventures of the IWW — real-life superheroes since 1905. Created by Paul Buhle, Nicole Schulman, Carlos Cortez, Harvey Pekar, Peter Kuper, Sue Coe, Seth Tobocman, Trina Robbins and others, this graphic novel covers an appropriately global range of issues and events in the history of this revolutionary organization, from the original sit-down strikes to fights for free speech, birth control and peasant rights. The variety of cartoonists is appropriate to the diverse subject matter, making for an informational and inspiring anthology that’s been a hit with teachers and students as well as fans. The Wobblies don’t make as many headlines as they used to, but they still exist and their motto is forever relevant: "One Big Union."