Pundits still fall for it: Trump does bare minimum in Texas, and suddenly he's presidential 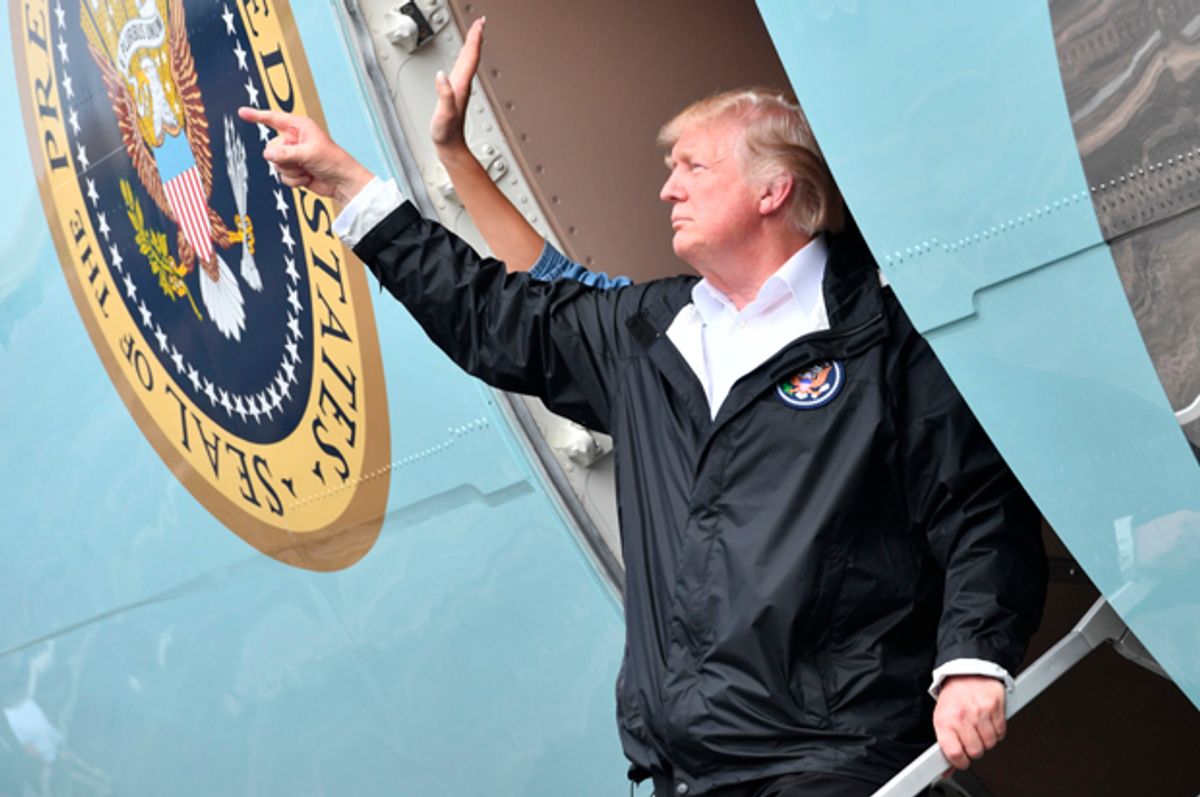 They keep falling for the same old flimflam. Not too long ago, we talked about how a batch of pundits appear to be continuously and desperately seeking occasions to normalize President Donald Trump. Last time we were here it was following Trump’s mysterious “surge” of an additional 4,000 troops to Afghanistan, without any sort of plan or exit strategy. Following the president’s remarks about the deployment, there was yet another roundelay of cable news talkers who scrambled to the next nearest camera in order to praise Trump for his presidential-ness -- in this case, his momentary engagement with the bare minimum requirements of being chief executive.

Naturally, it happened again during Trump’s second attempt at an official visit to flood-ravaged Houston on Saturday. It’s important to re-emphasize that there was exactly nothing special about Trump’s visits. Clearly, his first Texas trip didn’t even rise to the level of “bare minimum,” so Trump returned to the Lone Star State for another stab at getting away with barely mimicking what a normal president might do in the aftermath of a major natural disaster.

In the process, however, he couldn’t help but to lapse into Atamanuik-esque self-satire. Trump nonsensically trolled the news media for allegedly refusing to venture “into those winds” as the Coast Guard did, while inexplicably telling Harvey survivors to “have a good time” during this “wonderful” time. Meanwhile, he haphazardly loaded some boxes into the back of a pickup truck, looking a lot like a guy who’s never loaded anything into anything. Generally speaking, Trump wandered through a shelter or two pretending to be helpful, but only ended up looking like the soccer coach’s privileged son watching as the rest of the team runs laps around the field.

Despite somnambulating his way through a phony-baloney paint-by-numbers display of empathy and involvement, the pundits fell for it all over again. Certain players in the news media returned to their knee-jerk posture about Trump, powering their way through a minefield of harrowing Trump incompetence to muster undeserved praise for this allegedly presidential commander in chief.

Among others, MSNBC’s Alex Witt narrated live video of Trump awkwardly lumbering his way through NRG Stadium, telling a guest: “I’ve got to tell you, we’re seeing a remarkably different president than we have seen in the past. ... I mean, we have seen him with his grandchildren, and he walks hand in hand with them, deplaning Air Force One, or seeing them perhaps on the balcony at the White House, and we know that he is a doting grandfather in that regard.” Isn’t that adorable? She continued: “This is a much different president than the one we saw earlier this week in Houston, or the one that -- by reputation -- we usually see.”

Likewise, Philip Rucker of the Washington Post returned to his old routine. It was bad enough that Rucker unnecessarily lauded Trump’s Afghanistan address, but despite a long roster of horrible things since then, Rucker found another occasion to give Trump credit where none is due. Rucker wrote, “The president got to work acting like, well, a president.” No, he actually didn't. In order to be given credit for acting like a president, it’s necessary to act like a president most if not all of the time.

Imagine if your heart surgeon spent most of his time making armpit fart noise while your chest was splayed open, botching nearly everything about the surgery, but because he managed to close the incision (leaving a bloody mess and lost surgical implements underneath) he’s praised for acting like a heart surgeon. This is Trump. Just because he was shuttled to a disaster area and proceeded to wander around selling $40 baseball caps to homeless flood victims -- even though most of the time he acts like the fourth smirking couch-dweller on "Fox & Friends" -- doesn’t mean he deserves praise for occasionally getting away with the bare minimum, especially when he needed two tries to finally arrive at mediocrity.

This is praiseworthy behavior? Pundits who are smart enough to know better are rewriting mediocrity as an achievement and gross incompetence as normal. Literally anyone can go through the motions of pretending to be president in sporadic micro-bursts. True leaders, on the other hand, rise above that, and their true nature is observable in most of their actions, even if you disagree with their politics.

Trump can’t even momentarily pretend to be president without relapsing into being an entitled, grievance-addicted crank, during or after the attempt. If he manages to deliver a prompter speech without screeching about his inauguration crowd size or attacking his Republican allies, he soon after reverts back to his obnoxious default: Berserker Trump, randomly engaging in nuclear brinksmanship or sympathizing with Nazis or sabotaging his own legal defense. Yet the Ruckers of the world keep allowing themselves to be proven wrong, time and again.

With Trump, our standards for presidential achievement are nearly nonexistent. The longer he’s president, the more likely it is that we’ll have fewer and fewer presidents who are engaged and presidential in the traditional sense, grinding our national reputation down to a vague, boardwalk caricature of our former greatness.

As Trump is increasingly normalized by pundits, American voters are in severe danger of becoming further anesthetized into believing that his atrocious incompetence is acceptable, even while it noticeably destabilizes the world. Perhaps the most challenging aspect of rebuilding the country post-Trump will be to reacquaint ourselves with the average requirements for being presidential. If there’s any silver-lining upside to the spectacle of Trump’s ongoing series of disasters, maybe it’ll snap us back -- perhaps painfully -- to the traditional standards for choosing who gets to run one-third of the federal government. We can only hope it’s not too late to decide to seek presidents who are smarter, more disciplined and better informed than we are. America can’t be exceptional without exceptional Americans running the show. For now, though, we’re stuck with cartoonish, poseur leadership in the White House and too many news media observers who are willing to convince themselves this is sporadically acceptable.