Fund Trump's wall to protect the Dreamers? It's a bad trade, but Democrats should take it

Trump's DACA maneuver could be an attempt to extort funding for his idiotic wall. It might be a swap worth making 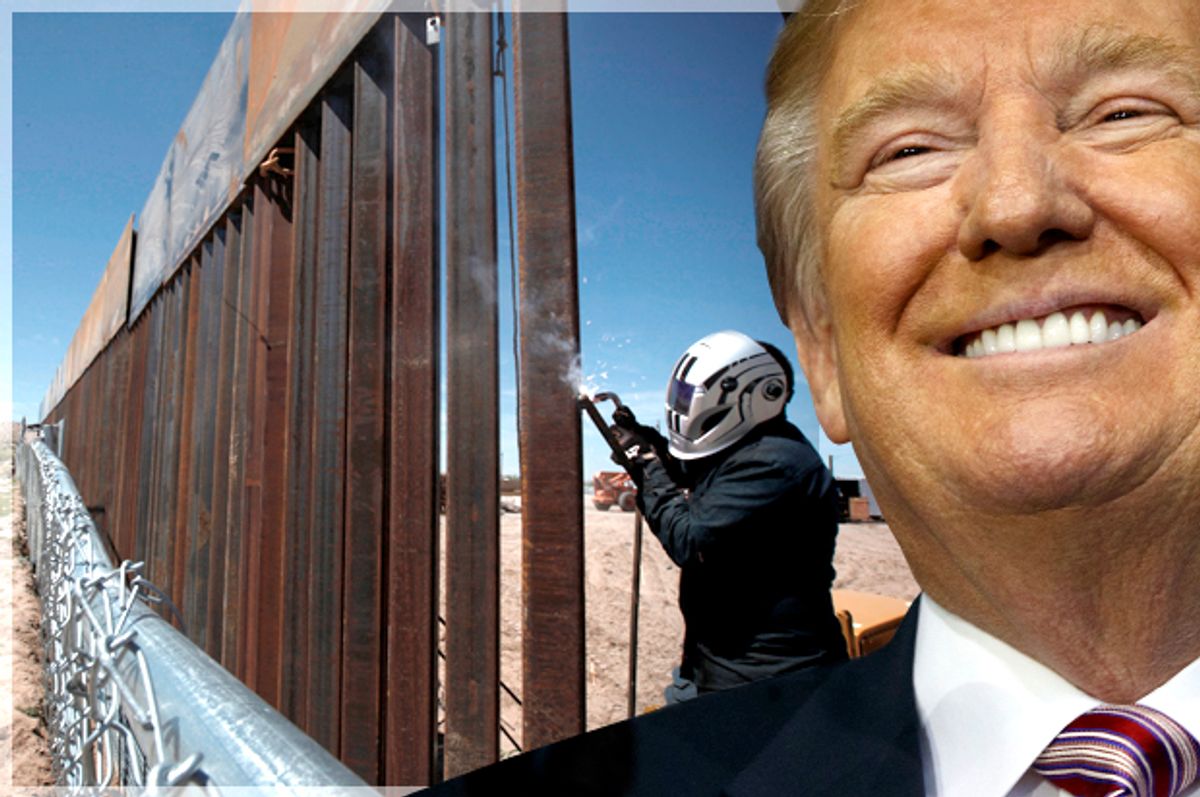 As I write this, we're still awaiting word on President Trump's final decision on whether to deport nearly a million people who were brought to this country as children. Of course, I'm speaking of the DREAM kids, who are Americans in every way but some technical paperwork.  Stipulating that he could still change his mind, Politico reported on Sunday night that the president has decided to end the DACA program but allow those young people to stay and work in the country for another six months to allow Congress to act.

Some in the media are describing this as a sign that Trump really, truly doesn't want to do the dastardly deed because he has such deep feelings for the DREAM kids. After all, he told them that they could "rest easy" and said that he loves them because they're kids and he has kids. So his delay in dealing with the issue and now possibly ending the program but tossing the hot potato to Congress is a sign of his inner turmoil.

Let's take a little look at some of the evidence of Trump's "big heart," shall we? I won't even go into the fact that he's endorsed torture, beheading,"taking out" families, summary executions, police brutality, vigilantism and nuclear war, among other big-hearted policy proclamations.

But for now let's focus on a couple of aspects of his immigration policy to get a good idea just how "conflicted" he really is.

He was a big fan of the notorious 1950s "Operation Wetback," which deported more than 1.5 million Latinos, some of them American citizens. Trump was especially enthusiastic about its policy of dropping people off as far from the border as possible, with no money and no water.

During the campaign he said outright, "They have to go" when asked if the DREAM kids and their families could get a reprieve. He also said that he wants to end birthright citizenship:

Trump has already ended the Obama-era program aimed at allowing the parents of Americans to stay in the country under strict conditions. And he said during the campaign that "anchor babies" would be deported with their parents.

And here is one of his standard quotes from the campaign trail in 2016 about the DREAM kids:

After the election he seemed to back off his harsh stance. Nobody knows why, but it's a wee bit much to assert that this president, the man who ran on all those cruel policies, suddenly grew a "big heart."

Neither is it likely that Trump suddenly gained a serious concern about constitutional questions of presidential authority with the DACA policy. That was the Republicans' collective primal scream when Obama enacted the policy, and Politico reports that this is the excuse being put forth by Trump's advisers.

Under normal circumstances, the constitutionality of the order might be a legitimate legal argument. But as The Washington Post's Greg Sargent pointed out on Monday, it holds no water when it comes to this administration. Trump doesn't know the difference between the Constitution and "The Art of the Deal" (which he also hasn't read). This is, after all, the man whose most notorious executive order was the unambiguously unconstitutional travel ban. In fact, he fired Acting Attorney General Sally Yates when she refused to enforce it. When the ban was blocked by the courts, the administration revised it. When the revision was blocked, Trump had a Twitter tantrum, which then became evidence used by the federal appeals court which ruled it unconstitutional:

No, the most likely explanation for Trump's gyrations over DACA is that somebody whispered in his ear that these hundreds of thousands of decent, hardworking, taxpaying people would make excellent hostages to get a deal for his border wall and some other expensive toys on the wish list. His hard-line advisers like Stephen Miller and Jeff Sessions -- and his base -- are adamantly opposed. This is the source of Trump's conflict.

You can see why he would love the idea of a "DACA for the wall" deal. It's a perfect Trump boondoggle. He can get taxpayers to pay for something he promised someone else would pay for, in exchange for something that shouldn't cost anyone a dime. Indeed, the DACA recipients themselves contribute billions to the economy. It's a neat scam.

If this becomes the deal, Democrats may be tempted to vote against it and let the Republicans fight it out. I think they should probably vote for it, as long as such a trade provides a guarantee that the Dreamers will get a path to citizenship. They should take credit for it if it passes too, and run against Trump and the GOP for torturing these people for years before finally deciding they needed that stupid wall so badly they capitulated.

As for the Big, Beautiful Wall, it will likely be yet another failed Trump development. It will have shoddy construction, cost overruns and will be falling down within a few years. It's a daft proposal that everyone knows came out of his silly imagination one day and sounded cute on the stump. Trump's even saying now that the wall has to be transparent so you can tell whether someone's going to drop bags full of drugs on your head. (Maybe we can just tell him that the wall is invisible and that Mexico paid for it.)

Either way, putting 800,000 Dreamer kids' minds at rest will be worth it. If there's one piece of GOP legislation that Democrats should back it's this one. Don't worry, it won't help Trump in the end. Everyone but the mainstream media and his followers already knows very well that he's heartless. He just wants his stupid wall.