America’s open border doesn’t exist. What if it did? 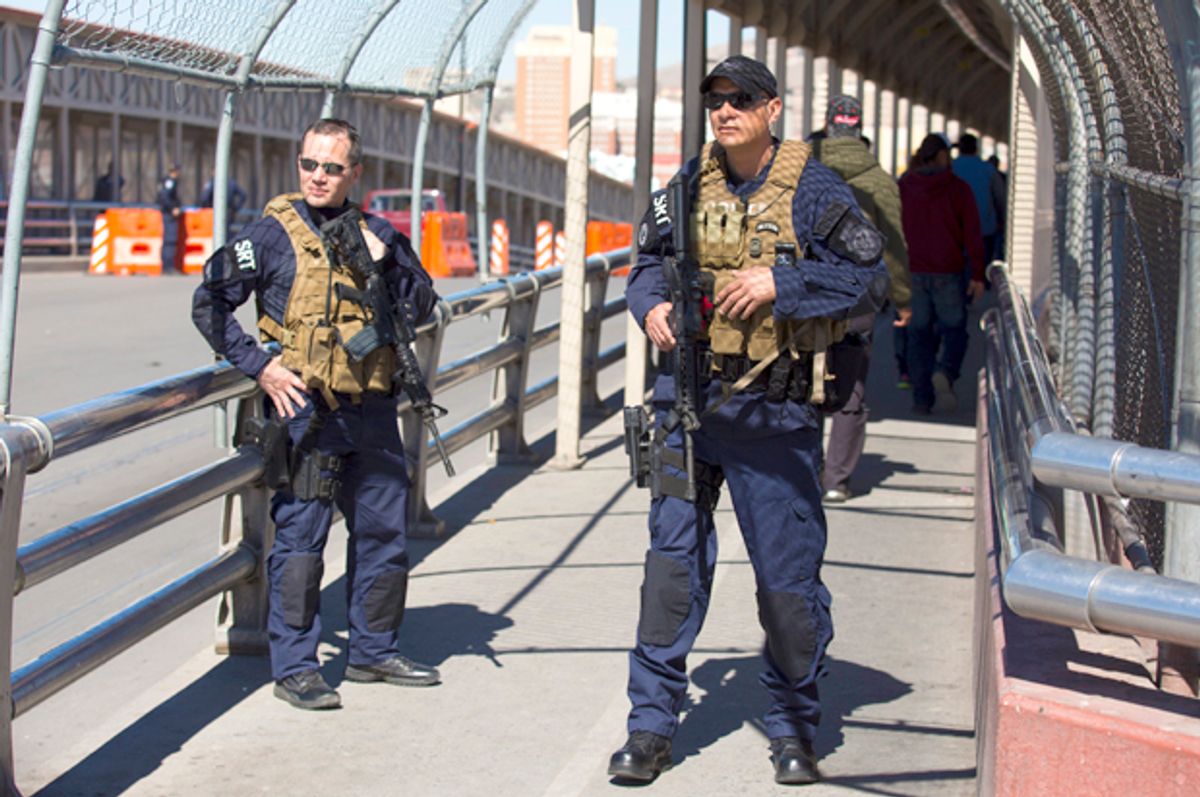 In June, I found myself at the San Diego-Tijuana border, northbound, on my way home to Los Angeles. The ease of traveling into Mexico only a few days earlier had not prepared me for the nightmare of crossing back into my home country. For more than six hours, I waited in a slow-moving sea of thousands of Mexican and American citizens to present my passport to agents of U.S. Customs and Border Protection. As I neared the border, K-9 units wove in and out of the lines of cars and automated cameras snapped my photo. Upon reaching the checkpoint, I was met by an officer armed with a pistol and hard line of questioning. And while I was finally waved through, I watched as hundreds more were diverted to a secondary inspection area despite meeting all the standards for entry set by the U.S. federal government. It was a wholly unwelcoming experience.

In July, I listened to President Donald Trump’s graphic remarks on the Central American criminal gang MS-13. “They kidnap, they extort, they rape and they rob. They prey on children,” he said. Worse, he explained, that the “bad hombres” of MS-13 are here among us owing to “an open-door policy” at the nation’s southern border. On Tuesday, the President took a more decisive step in his assault on immigration by moving to end Obama’s Deferred Action for Childhood Arrivals program, blaming it for the uncontrolled “surge of unaccompanied minors from Central America” who in some cases would “become members of violent gangs throughout our country, such as MS-13.”

His characterization of the border wasn’t new. During his campaign for president, Trump repeatedly accused Hillary Clinton of supporting “open borders.” Even Republicans who live nearer to the border than Manhattan have shared Trump’s concerns. Under the previous administration, Representative John Carter (R-Tex.) said, he was growing tired of the erosion of American sovereignty, a result of President Barack Obama’s “open borders” campaign. This all struck me as odd, given my recent experience.

You can rest assured, our southern border does not appear the least bit open, and it certainly closed a little more today, but all the fuss does beg the question, what would an open border policy actually look like? Until about midway through the 20th century, the border with Mexico was a pretty casual affair. When U.S. borders were guarded and immigration restrictions enforced, it was done so arbitrarily — generally a symptom of episodic racial panic. Our country’s first experiment with immigration restrictions came with the 1875 Page Act, which all but excluded Chinese women. The Page Act was followed shortly by the less subtle 1882 Chinese Exclusion Act, which placed a 10-year ban on Chinese immigration to the United States.

In fact, the American philosopher Joseph Carens, author of "The Ethics of Immigration," likens the current obsession with borders, in the U.S. and elsewhere, to feudalism. “Being born into the United States rather than the Congo is like being born into the nobility rather than the peasantry in the Middle Ages,” he explained in an interview with the Washington Post. “This completely random factor dramatically advantages and disadvantages people. Everyone thinks feudalism was wrong. Why should some people receive special social status just by birth? But If feudalism was wrong, why doesn’t the same sort of objection apply to the way we have organized the world today?”

Carens draws on the ideas of American philosopher John Rawls, specifically repurposing the “veil of ignorance,” from Rawls's influential “A Theory of Justice,” to the issue of immigration. Rawls posited that true justice can only be determined if we are ignorant of morally arbitrary contingencies such as class, status, intelligence, etc. Accordingly, the veil of ignorance is the thought experiment in which people are blind to these contingencies. Its value lies in comparing our current system of justice with the one constructed from behind the veil, to determine how far we have strayed from the ideal.

“Facts such as who one's parents are or where one is born are morally arbitrary and therefore precisely the sorts of things ruled out by the veil of ignorance,” Carens writes in “Aliens And Citizens: The Case For Open Borders,” an essay that draws on contemporary approaches to political theory to construct arguments for open borders “Given this, people [behind the veil] would select a principle of international justice that protected the right to free movement, because migration might prove essential to their life plans.”

The logic is easy to follow. If a person’s birth location is arbitrary, if they are as likely to be born in South Sudan as the U.S., all people would no doubt privilege the right to free movement — or “open borders” in Trump’s phrase.

Still, there could remain certain checks on migration. According to Carens, a Professor of Political Science at the University of Toronto, justice behind the veil would accommodate national sovereignty. “National security is a crucial form of public order,” he explains. As a result, all those behind the veil would agree to grant the state the power to prevent the entry of people seeking to overthrow their society’s just institutions.

Putting Carens' open borders into practice would likely result in a gold rush toward affluent nations where rule of law is strong. Even if their goals and beliefs posed no threat to national security, the sheer number of migrants might be enough to overwhelm a rich country.

According to economist Michael A. Clemens at the Center for Global Development, the elimination of labor mobility barriers would likely cause wages in rich countries to fall. On the other hand, the world would also gain an additional 20 percent to 60 percent of  GDP, largely as a result of labor relocating to more affluent and efficient markets. According to Clemens, if half of the world’s poor relocated to rich countries, “migrants would gain $23 trillion — which is 38 percent of global GDP.” As the Economist points out, by migrating to a rich country, the previously poor “can join a labour market with ample capital, efficient firms and a predictable legal system.” Of course, reducing global poverty is not a high priority for many border restrictionists. They’re mostly concerned with preventing illegal crossings. And they're mostly succeeding in that. How do we know? Given the desirability of living in the U.S., and the great extremes that millions of people around the world would go to secure a place here, it’s pretty obvious that the barriers to entry are very high with or without a wall.

As long as Central American migrants continue to invest their savings, and put their lives, into the hands of deadly human trafficking organizations, it’s a sure sign that our borders aren't anywhere close to open, and crossing them isn’t anywhere close to easy.