In a flea market rife with Confederate flags, a vintage shop embraces a different crowd

In the heart of a "scruffy" Florida city, one woman bridges the gap between the bikers, goth kids and hipsters 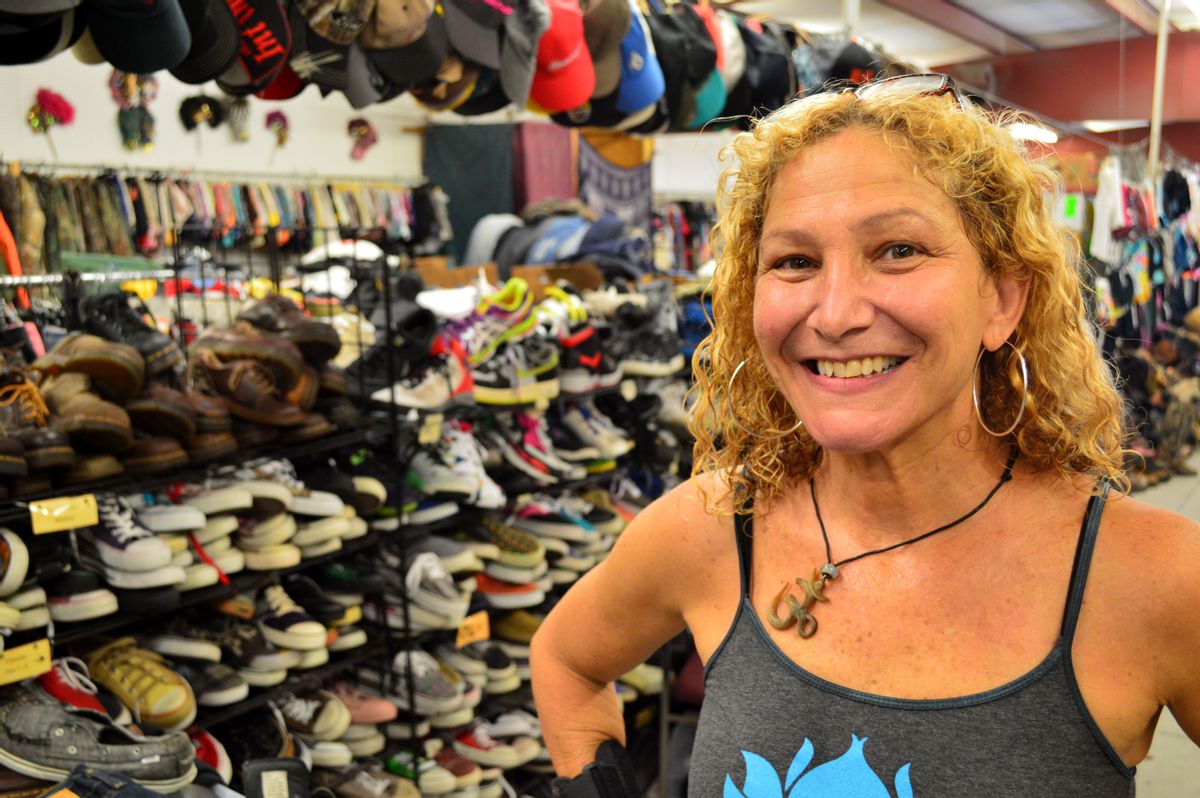 A father and his teenage son rummage through stacks of jeans on a Sunday at Wendy’s Closet in Pinellas Park’s Wagon Wheel Flea Market. It’s July, which means back-to-school shopping and heat (industrial fans keep the day tolerable). The two guys stand in rows and rows of used clothes that go from infant to men’s size 60.

“I have everything for bikers, the goth kids, the hipsters” says owner Wendy Barrett, 54. “I wanted to make a point to have everybody’s style and size, to be accepting.”

Among all these choices, the father-son combination need some help. Barrett keeps a mental catalog of clothes in her store, a shed of sorts that spans 38 ten-by-ten booths. After she helps the teenage son figure out his look, Barrett hands him a pair of jeans.

“I pay attention to my customers,” she says, “and I want them to look their best.”

Born in Miami, Barrett describes her upbringing as “totally middle class” and says her mother shopped off the sales rack at Burdines (a department store that once epitomized Florida style but shuttered in 2005). Barrett earned a finance degree, she says, from Florida Atlantic University in Boca Raton.

But a guy who sold used clothes out of his Jeep set her on a new life path.

“That was my first thrifting experience, and it was like, holy,” she says. “I’ve had eight Jeeps since then, and I now thrift for a living.”

Barrett says she gets her clothes from “nunya” — as in nunya business — and first set up a Wagon Wheel booth in 1994.

“I just sprouted from there,” she says. “I didn’t plan on being this big.”

Wagon Wheel — which stands adjacent to the outside Mustang Flea Market — has long been an institution for weekend bargain hunters. Hardy Huntley started the flea market back in 1966 as a one-man roadside. Now it spans acres and is run, Barrett says, by Huntley’s grandson.

“I feel like they’re family to me,” she says. “It’s kind of a lifestyle for flea market people.”

“She’s everywhere and hard to keep up with,” says Betty Pryce, 58, a Wendy’s Closet employee for five years, “but she’s very good-hearted and has anything you need.”

One time, she says, a doctor’s office receptionist told her, “You saved my ass for many school years.”

“I have generations of families shopping with me,” she says. “I see children, who become adults, who then become parents and have their children shop with me.”

Another mother, Barrett says, recently reached out to thank her for the shop’s inclusivity.

“I have a bunch of transgender teenagers who shop with me,” she says. “Everything’s cool here.”

A Pinellas Park flea market — with Confederate flags sold at various booths — doesn’t necessarily shout LGBT-friendly. But, it seems, Wendy’s Closet has helped some area teenagers come out of theirs.

“I don’t care what you wear,” she says, “as long as it makes you happy, and you don’t make a mess in my store.”