Israel is playing charades in its population battle with Palestine 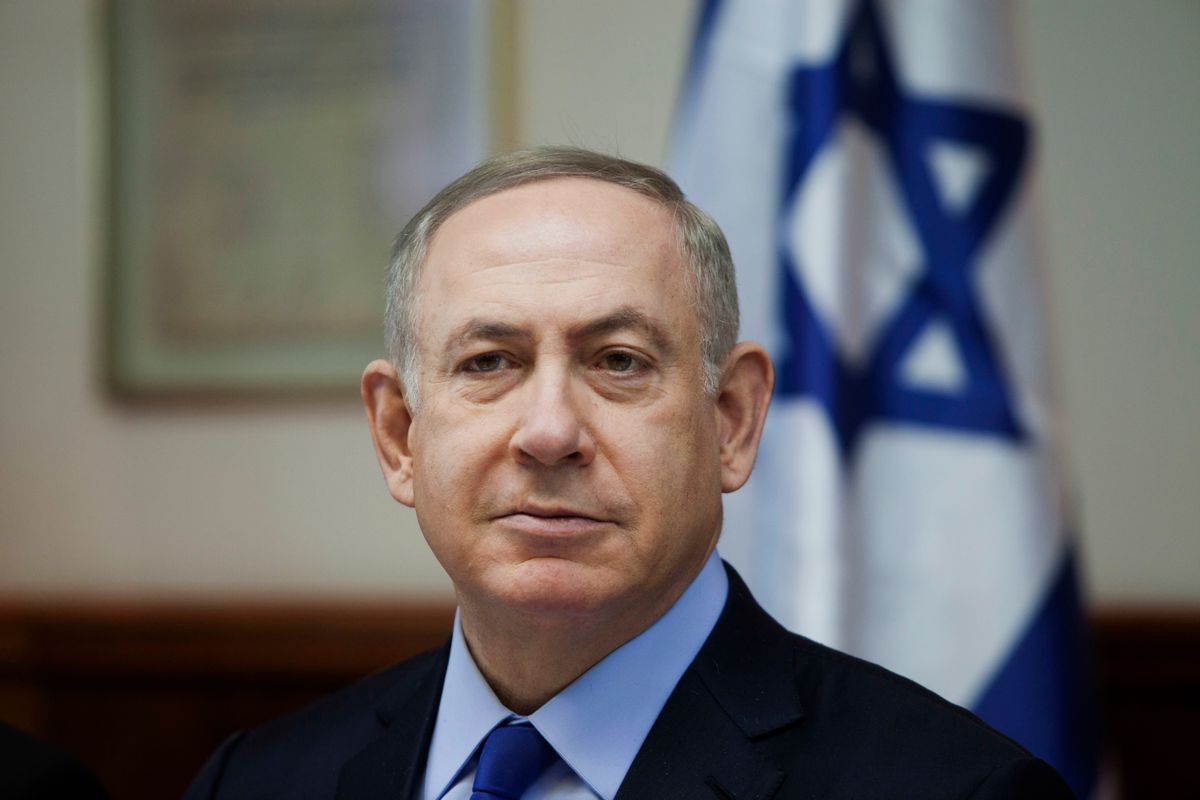 FILE -- In this Sunday, Dec. 25, 2016 file photo, Israeli Prime Minister Benjamin Netanyahu attends a weekly cabinet meeting in Jerusalem. On Wednesday, Jan. 5, 2017, Netanyahu called for a pardon for a soldier convicted of manslaughter in the shooting death of a badly wounded Palestinian assailant. With his comment, the prime minister has plunged into a raging political debate that has divided the country and put himself at odds with the military. Sgt. Elor Azaria was convicted on Wednesday of manslaughter in the fatal shooting of a Palestinian who lay on the ground incapacitated from shots sustained after he stabbed and wounded a soldier in the volatile West Bank city of Hebron. (Dan Balilty/Pool photo via AP, File) (Dan Balilty/Pool photo via AP, File)
--

Israeli prime minister Benjamin Netanyahu offered a crushing rebuke to the hopes of perennial optimists roused by the visit to the Middle East last week of Donald Trump’s adviser and son-in-law, Jared Kushner. At an event on Monday in the West Bank celebrating the half-centenary of Israeli occupation, Netanyahu effectively admitted that U.S. efforts to revive the peace process would prove another charade.

There would be no dismantling of the settlements or eviction of their 600,000 inhabitants — the minimum requirement for a barely feasible Palestinian state. “We are here to stay forever,” Netanyahu reassured his settler audience. “We will deepen our roots, build, strengthen and settle.”

So where is the Israeli-Palestinian conflict heading if the two-state solution is dead? The answer: back to its origins. That will entail another desperate numbers battle against the Palestinians, with Israel preparing to create new categories of “Jews” so they can be recruited to the fray.

Demography was always at the heart of Israeli policy. During the 1948 war that founded a Jewish state on the ruins of the Palestinian homeland, 750,000 Palestinians were expelled in a campaign that today would be termed ethnic cleansing. By the end, a large native Palestinian majority had been reduced to less than a fifth of the new state’s population. David Ben Gurion, the country’s founding father, was unperturbed. He expected to swamp this rump group with Jews from Europe and the Arab world.

But the project foundered on two miscalculations.

First, Ben Gurion had not factored in the Palestinian minority’s far higher birth rate. Despite waves of Jewish immigrants, Palestinians have held fast, at 20 per cent of Israel’s citizenry. Israel has fought a rearguard battle against them ever since. Studies suggest that the only Israeli affirmative action programme for Palestinian citizens is in family planning.

Israeli demographic scheming was on show again last week. An investigation by the Haaretz newspaper found that in recent years, Israel has stripped of citizenship potentially thousands of Bedouin, the country’s fastest-growing population. Israel claims bureaucratic “errors” were made in registering their parents or grandparents after the state’s founding.

Meanwhile, another Rubicon was crossed this month when an Israeli court approved revoking the citizenship of a Palestinian convicted of a lethal attack on soldiers. Human rights groups fear that, by rendering him stateless, the Israeli right has established a precedent for conditioning citizenship on “loyalty.”

Justice minister Ayelet Shaked underlined that very point this week when she warned the country’s judges that they must prioritise demography and the state’s Jewishness over human rights.

The second miscalculation arrived in 1967. In seizing the last fragments of historic Palestine but failing to expel most of the inhabitants, Israel made itself responsible for many hundreds of thousands of additional Palestinians, including refugees from the earlier war.

The “demographic demon,” as it is often called in Israel, was held at bay only by bogus claims for many decades that the occupation would soon end. In 2005, Israel bought a little more breathing space by “disengaging” from the tiny Gaza enclave and its 1.5 million inhabitants.

Now, in killing hopes of Palestinian statehood, Netanyahu has made public his intention to realise the one settler-state solution. Naftali Bennett, Netanyahu’s chief rival in the government, is itching to ignore international sentiment and begin annexing large parts of the West Bank.

There is a problem, however. At least half the population in Netanyahu’s Greater Israel are Palestinian. And with current birth rates, Jews will soon be an indisputable minority ruling over a Palestinian majority.

That is the context for understanding the report of a government panel, leaked last weekend, that proposes a revolutionary reimagining of who counts as a Jew and therefore qualifies to live in Israel (and the occupied territories).

Israel’s 1950 Law of Return already casts the net wide, revising the traditional rabbinical injunction that a Jew must be born to a Jewish mother. Instead, the law entitles anyone with one Jewish grandparent to instant citizenship. That worked fine as long as Jews were fleeing persecution or economic distress. But since the arrival of 1 million immigrants following the fall of the Soviet Union in the early 1990s, the pool of new Jews has dried up.

The United States, even in the Trump era, has proved the bigger magnet. The Jerusalem Post newspaper reported last month that up to one million Israelis may be living there. Worse for Netanyahu, it seems that at least some are included in Israeli figures to bolster its demographic claims against the Palestinians.

Recent trends show that the exodus of Israelis to the US is twice as large as the arrival of American Jews to Israel. With 150 Israeli startups reported in Silicon Valley alone, that tendency is not about to end.

With a pressing shortage of Jews to defeat the Palestinians demographically, the Netanyahu government is considering a desperate solution. The leaked report suggests opening the doors to a new category of “Jewish” non-Jews. According to Haaretz, potentially millions of people worldwide could qualify. The new status would apply to “crypto-Jews,” whose ancestors converted from Judaism; “emerging Jewish” communities that have adopted Jewish practices; and those claiming to be descended from Jewish “lost tribes.”

Though they will initially be offered only extended stays in Israel, the implication is that this will serve as a prelude to widening their entitlement to eventually include citizenship. The advantage for Israel is that most of these “Jewish” non-Jews currently live in remote, poor or war-torn parts of the world, and stand to gain from a new life in Israel or the occupied territories.

That is the great appeal to the die-hard one-staters like Netanyahu and Bennett. They need willing footsoldiers in the battle to steal Palestinian land, trampling on internationally recognised borders and hopes of peace-making.

Will they get away with it? They may think so, especially at a time when the U.S. administration claims it would show “bias” to commit itself to advancing a two-state solution. Trump has said the parties should work out their own solution. Netanyahu soon may have the arithmetic to do so.

A version of this article first appeared in the National, Abu Dhabi.

Jonathan Cook won the 2011 Martha Gellhorn Special Prize for Journalism. His latest books are "Israel and the Clash of Civilisations: Iraq, Iran and the Plan to Remake the Middle East" and "Disappearing Palestine: Israel’s Experiments in Human Despair." His website is here.