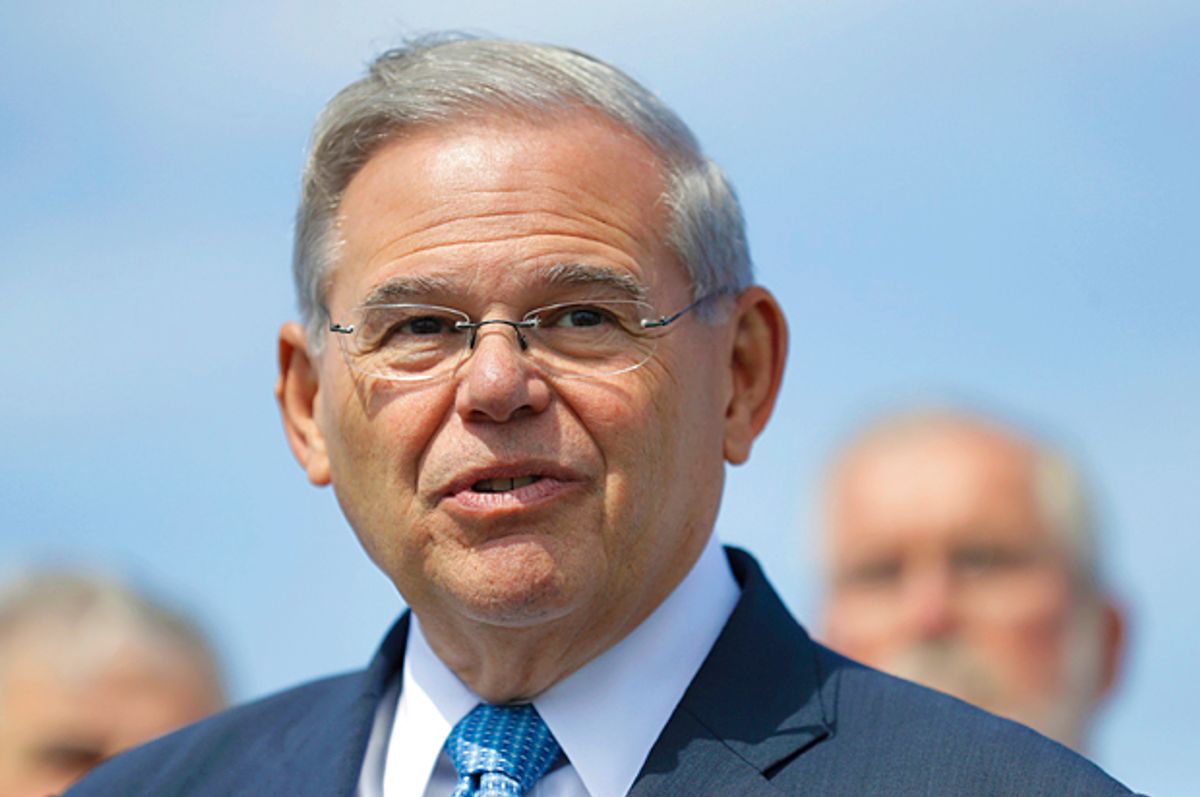 Later today, federal prosecutors will formally make their case against Sen. Bob Menendez, a Democrat from New Jersey, in a bribery trial that is likely to garner several salacious headlines.

Menendez stands accused of engaging in a “corrupt pact” with Salomon Melgen, a Florida eye doctor who was convicted in April on 67 counts of defrauding Medicare of more than $100 million, primarily through overbilling and misdiagnosing patients. Melgen’s sentencing has been postponed, pending the resolution of the corruption trial. The ophthalmologist faces up to 30 years in prison for the Medicare fraud alone.

According to prosecutors, Melgen contributed more than $750,000 to Menendez’s campaigns and gave the senator frequent flights on his private jet to a resort he owns in the Dominican Republic and elsewhere. Melgen also paid for a Paris vacation for Menendez and his girlfriend at a hotel costing $1,500 a night, U.S. attorneys wrote in a filing.

Menendez returned the many favors several times over, prosecutors say, by helping Melgen in a number of ways, including interceding on his behalf with federal authorities to grant three of the doctor’s girlfriends travel visas to enter the United States. Menendez is also accused of trying to get the Department of Health and Human Services to abandon its billing dispute with Melgen that led to his April fraud convictions. Additionally, prosecutors say that in 2012, Menendez tried to get Sen. Harry Reid, then the Democratic leader, to direct the agency to drop its case against Melgen.

Federal attorneys have been investigating Menendez for his relationship with Melgen since 2013. He was indicted in April 2015 on 22 criminal counts of bribery, conspiracy and false statements.

Since the case against him was formally announced, Menendez has maintained his innocence.

After the investigation against him became public knowledge, Menendez acknowledged that he had failed to disclose the free flights he received from Melgen, calling it an “oversight.” The senator reimbursed Melgen $58,000 for the travel.

Both men’s attorneys have repeatedly and unsuccessfully sought to delay the trial or to get the charges dismissed. In March of this year, the Supreme Court rejected a motion from Menendez that sought to block the case from going to court.

Republicans have seized upon Menendez’s legal troubles and on Tuesday announced an effort to get him to resign his office in the event of a conviction or, failing that, to demand the Senate oust him. Under the Constitution, a senator may only be expelled from the legislative body if two-thirds of the members vote to remove him or her. Such a scenario would require at least 15 Democratic senators to join all 52 Republicans in order to succeed.

Republicans released a web video featuring statements from Democratic politicians, including former President Barack Obama, calling upon former Sen. Ted Stevens, an Alaska Republican, to resign after he was convicted of seven felony charges in 2008.

After his conviction, Stevens declined to resign, and the charges against him were ultimately dismissed after the prosecution was found to have concealed exculpatory evidence. All of that happened, however, after Stevens had lost his re-election bid. Several Republican senators had indicated they might vote to expel Stevens had voters returned him to office.

New Jersey legal observers expect the Menendez and Melgen trial to last between six and eight weeks. Should Menendez resign his office or be removed from the Senate, New Jersey Gov. Chris Christie, a Republican and former confidant of President Trump, would be empowered to appoint a temporary replacement to serve until the end of 2018. Under New Jersey law, governors are not required to appoint members of the same party to fill vacated congressional seats.

“If the Senate Ethics Committee were worthy of its name, it would have referred expulsion [of Menendez] to the Senate floor years ago,” Phil Kerpen, president of the conservative advocacy group American Commitment, told Salon. “A conviction should be a bridge too far, and if Menendez refuses to resign after being convicted of selling his office then senators will have to decide whether to expel Menendez or make themselves complicit in his crimes.”

While the GOP's Senate leader, Mitch McConnell, is known for his fondness for power plays, the odds of ultimately getting a Republican into Menendez’s seat are low, according to Matthew Hale, an associate professor of political science at Seton Hall University. Part of the reason is a 2016 Supreme Court case in which the justices ruled that former Virginia Gov. Bob McDonnell was wrongfully convicted of bribery because he was not shown to have done any “official acts” on behalf of a lobbyist. McDonnell’s acquittal may make it easier for Menendez to avoid the bribery charges and face only the less serious false reporting charges.

“That scenario would make it much more difficult for the Senate to have a slam-dunk case for removal,” Hale said in an interview. Further compounding the problem for Republicans is that even if every Democrat who is up for re-election in 2018 decided to join their GOP counterparts in removing Menendez, that would still not reach the 67 votes required for removal.

The appeals process could also be useful to Democrats. New Jersey is holding a gubernatorial election this November, which Democratic nominee Phil Murphy is widely expected to win, especially given Christie's historically low approval ratings. (Christie is not running for re-election, but New Jersey generally tilts Democratic overall, and the state GOP is unquestionably tarnished.)

“My guess is that if he were convicted, Menendez would do everything he could in terms of appeals to stay in office until the next governor, presumably a Democrat, could come into office and appoint another Democrat,” Hale said.