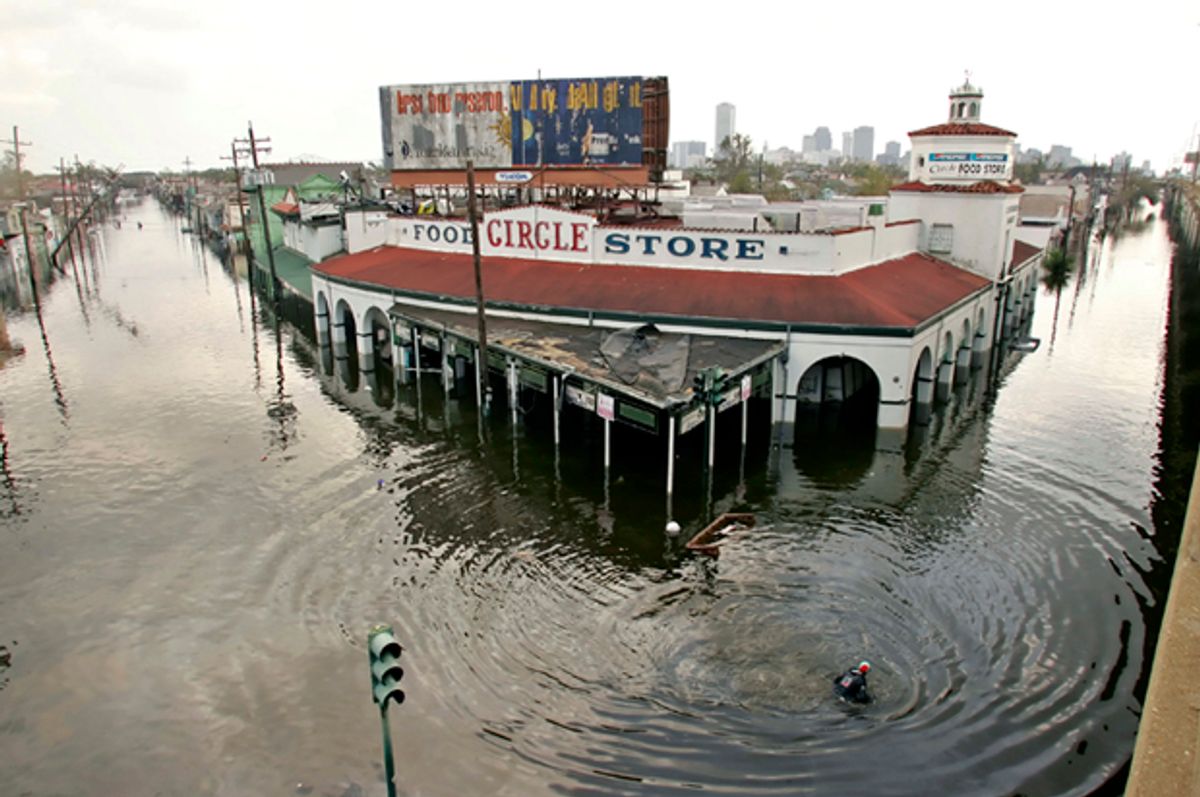 Floodwaters in parts of Houston are beginning to recede after nearly a week of rain from Hurricane Harvey. The emphasis for many flood victims will now shift from survival to recovery.

While many economists are trying to determine the disaster’s overall toll — certain to be significant — a topic less explored is the financial impact on Harvey’s victims.

In recent research I co-authored with economist Daniel Hartley, we provide some of the first victim-level evidence of the financial impact of a costly flood. Specifically, we examined financial data for victims of Hurricane Katrina in 2005.

Since Hurricane Harvey made landfall near Houston on August 25, rain totals have topped 50 inches in some locations.

The result has been untold human suffering. At least 60 lives have been lost, and tens of thousands had to evacuate their homes. Property damage may surpass that of Katrina, which up until now has been the most costly hurricane to hit the U.S., with an estimated price tag of US$108 billion.

That storm flooded about 85 percent of New Orleans, killed at least 1,833 people and displaced an estimated 450,000 residents.

Katrina is only one of dozens of devastating hurricanes that have wrought destruction along the southeast and eastern coasts of the United States in recent decades. Yet despite the frequency of such disasters, little has been known until recently about the financial toll on flood victims.

In our study, we measured the financial impact from Katrina using credit agency data on a random sample of U.S. residents. We zeroed in on 16,000 people living in New Orleans at the time of Katrina and tracked their credit histories three years before and after the storm.

The information is quarterly and includes all reported debts, including home loans, credit cards and student loans. Debt is a good proxy for financial impact because a change in borrowing is often how people manage an unexpected shock, such as a disaster.

Although the data are anonymized, their approximate location was included in the data based on the “census block” of residence, which in New Orleans is a couple of city blocks in size on average.

We divided residents in our sample into a nonflooded group and four flooded groups based on the depth of water in their block, which ranged from less than a foot for the least-flooded to about eight for the most.

The data showed that prior to Katrina, total debt levels for nonflooded, least-flooded and most-flooded residents were on a similar upward trajectory. The overall level of debt was highest for residents in the nonflooded group, while that of residents in the other two groups were nearly identical.

What we found was that average debt for those who experienced the most flooding plunged within a few months of Katrina, falling about 25 percent. Meanwhile those who had the least flooding saw their debt briefly level off. Debt of those who didn’t encounter any flooding, on the other hand, continued to rise unabated.

Beginning about a year after Katrina, the rate of debt accumulation for all three groups returned to the pre-storm trend.

Breaking down the debts

Breaking down the data into specific types of borrowing, we found that it was primarily a sharp drop in home loan debt that accounted for the overall change.

After controlling for several socioeconomic and demographic factors and pre-Katrina flood risk, we saw that home debt decreased by about $12,000 for the most-flooded residents relative to those who experienced none.

The credit agency data indicated that apart from this reduction, flooding from Katrina had a modest and relatively short-lived negative impact on the personal finances of the most-flooded residents.

Their average credit card debt temporarily increased about $500 (15 percent) but was paid back within a year, while auto and student loan debt didn’t change at all. Ninety-day bill delinquency rates rose about 10 percent for a quarter, and credit scores declined about 1 percent for two years.

The relatively modest and short-lived financial impact of Katrina on its victims is supported by another recent study based on tax return data. It found that within a few years of the storm, the income of flood victims was higher than that of filers living outside of New Orleans with similar pre-Katrina financial histories.

An important caveat to both studies is that neither includes information on subpopulations that may be most vulnerable to natural disasters, such as those without a credit history or who don’t file federal income taxes. Residents in both groups were more likely to be unemployed before the flood and have fewer financial resources.

Homeowner decisions to use flood insurance to pay down home loan debt accounts for most of the reduction. Around 25 percent of victims with a home loan in the most-flooded group paid it off within six months of Katrina.

Using flood insurance to pay off a home loan made financial sense for some. About two-thirds of homeowners in New Orleans had such insurance.

Assuming a home is fully insured, a flood insurance check would cover the cost to rebuild it. But in many neighborhoods of New Orleans prior to Katrina, reconstruction costs of homes exceeded their worth, in which case it made sense to purchase a similar home elsewhere at a lower cost rather than rebuild. When this occurred, any existing mortgage debt had to be paid off first.

Some homeowners, however, appear to have made this decision to pay off mortgage debt due to pressure from lenders, which is both illegal and probably a poor financial decision. We found evidence consistent with accounts that lenders, particularly national banks without a strong local presence, pressured some homeowners to pay off mortgages using flood insurance money.

What it means for Harvey victims

So what does the experience of Katrina’s victims mean for the financial recovery of those flooded by Harvey?

First, the collective safety net provided by flood insurance, government assistance, nonprofit aid and personal savings encouraged a relatively quick financial recovery — as measured by debt levels, indicators of financial distress and income — for even the worst-hit victims of Katrina.

Flood insurance played a particularly important role. More than $16 billion in flood insurance was paid out, or $97,141 per claim. By comparison, direct federal assistance to victims for rebuilding was capped at $15,700. Other assistance approved by Congress didn’t arrive until over a year later.

That won’t be of much comfort to the residents of Houston, however, where flood insurance coverage rates have dropped 9 percent in the past five years. Only 17 percent of homeowners in the counties most affected by Harvey have policies.

In order for Harvey victims to recovery financially at a pace similar to Katrina’s, per-person direct government assistance will likely need to be larger. President Trump has reportedly requested $7.9 billion so far.

Second, the Houston metro area has experienced significant population growth and increasing property values. Flooded homeowners who have insurance are likely to be better off financially if they use their checks to rebuild rather than paying off home loans and walking away. Houston residents should be wary of banks that suggest otherwise.

We know that there will be devastating future floods in Houston and elsewhere, and climate change is expected to increase their frequency.

The National Flood Insurance Program was created in 1968 to help protect Americans against the risk of flooding without requiring extensive taxpayer-financed federal disaster aid. But insufficient insurance coverage, like in Houston, drastically limits its effectiveness.

If we want to avoid generous disaster bailouts in the future, policy changes to the program are necessary: for example, by ensuring more people who choose to live in areas at greatest risk of flooding are compelled to buy insurance.

Strengthening the insurance program is one way to help ensure residents of Houston and other coastal cities are prepared for the many floods to come.