"The epitome of art for art's sake": Fleetwood Mac's masterful and difficult "Tusk"

The band that helped usher America from AM to FM radio, and their infamous follow-up to "Rumours" 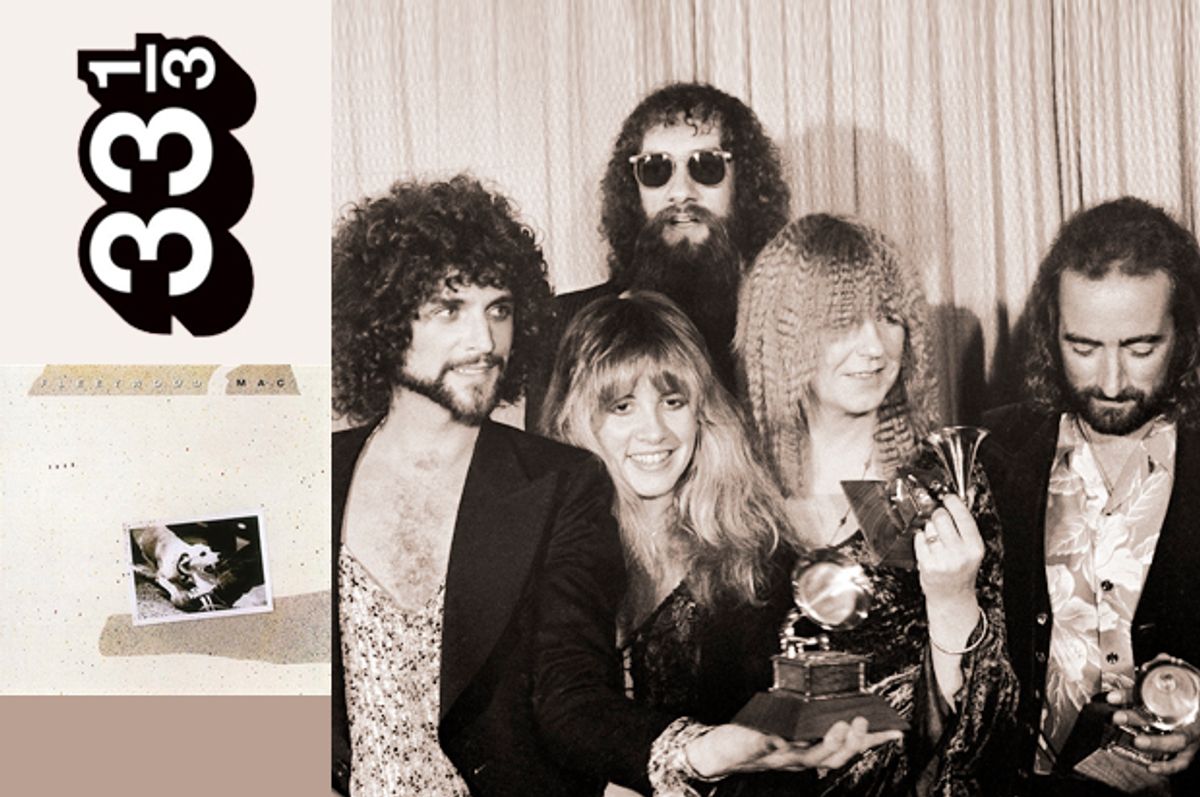 Christine McVie, the missing third of Fleetwood Mac’s three vocalists and songwriters during the group’s glory years, is 65 and nowhere near Pittsburgh. She retired from Fleetwood Mac, and touring, a decade before.

At 59, Lindsey Buckingham, the man behind Tusk, is the baby.

For the next four months, at every one of their 51 performances, the band will play 23 songs, beginning with “Monday Morning” and ending with “Silver Springs.” Of the 21 songs in between, the oldest is the Peter Green-penned “Oh Well,” which first appeared on the Then Play On album, approximately five years before Buckingham and Nicks joined. The newest, a significant reworking of Tango in the Night’s “Big Love,” is old enough, if animated, to drink, vote, and be tried as an adult.

Stevie Nicks wears a selection of shawls and, when onstage, is often lost in her own private Idaho, spinning and twirling, twirling and spinning. Like Billy Idol, dancing with herself.

Nicks will definitely be onstage for “Sara,” the tenth selection of the evening and one of but three songs from Tusk that makes the set list. Certain internet bloggers will have you believe that Nicks wrote “Sara” for her aborted child, fathered by the Eagles’ Don Henley. Mick Fleetwood has written that he is the song’s “great, dark wing,” while others will suggest that “Sara” is about Sara Recor, one of Nicks’ closest friends until Recor started sleeping with Fleetwood before Nicks realized that her own relationship with the drummer was over.

Whatever the song’s true topic, “Sara” is one of the few early Nicks songs that is positively not about her relationship with Lindsey Buckingham. And yet every night for 51 nights Nicks will sing herself over to Buckingham’s side of the stage, lay her head on his shoulder and, at the song’s conclusion, initiate an embrace before leaving the stage, once again and not so subtly selling the band’s “complex and convoluted history” that reached its peak with Rumours.

Within a year of its release, Rumours is the best-selling album in the history of Warner Brothers.

Rumours is the best-selling single album by a single artist of all time (these qualifiers allow ignorance of the Saturday Night Fever soundtrack).

And though the Grammy Awards are like a middle school graduation exercise in that no one but the participants and their parents gives a shit, Rumours won one of those too.

Rumours, along with Hotel California, another mid-1970s, LA-based “soft rock” classic, ushered in America’s transfer from AM to FM radio.

Talking about Tusk without Rumours is like talking about aftershocks without an earthquake, like a lava flow without a volcanic eruption.

Tusk is not Tusk without Rumours.

Stevie Nicks is responsible for the wildly inappropriate tour title.

Stevie Nicks also threatens to quit the band if Tusk is used as the title of their 1979 double album.

Because, yes, among other things, Tusk represents part of the male anatomy.

You need go no further than the album covers for Fleetwood Mac and Rumours to know that Mick Fleetwood has a proclivity for dick jokes.

In a lot of ways, rock and roll is like nursery school and, at least in this sense, Fleetwood Mac is very much rock and roll.

This is how the story goes:

As much as Rob would like to see this proportionately heroic regurgitation as symbolic, he’s afraid (Rob is often afraid) that a combination of steadily ingested pre-show drugs, and not any personal animosity towards Dick Clark and everything he stands for, is to blame.

Now that some 30-year-old dust has settled, Rumours stands as the ninth-best-selling album of all time, comfortably nestled between Shania Twain’s Come on Over, and the Beatles’ so-called White Album.

Coincidentally, the White Album is not only the bestselling Beatles album of all time, but a pretty good road map (were one to exist) for Tusk.

You know, a wildly experimental double album from a wildly successful pop band with a plethora (if three can be considered a plethora) of singing and songwriting talent.

And yes, Ringo wrote “Don’t Pass Me By,” which represents one-thirtieth of the group’s recorded output in 1968, and that really makes four singers and four songwriters for the Beatles so you’re welcome to use that fact as a disqualifier if you’d like because we’re about to move on to Pet Sounds comparisons anyway.

Besides FM radio and music, Rumours also sold a storyline. No review, interview, or feature about the band was written without assessing the recent break-up of Christine McVie from John McVie, of Stevie Nicks from Lindsey Buckingham.

And how the songs of Rumours sprung from these separations.

For those just barely old enough to see Pet Sounds in the rearview mirror, Tusk stands as a pioneer, the epitome of art for art’s sake. Not only an influence but also a permission slip, a throwing down of the creative gauntlet.

Which is why Tusk functions as both a primary influence for many independent musicians and an alarm of earsplitting proportions for the major label system that gave it birth.

When a wrestler’s good-guy character has run its course, he turns heel.

When a wrestler’s bad-guy character has run its course, he turns babyface.

But what do you do when a rock and roll band’s storyline is a plethora (if a plethora can be two) of break-ups and there’s no chance of romantic reconciliation?

Fleetwood Mac is a machine.

Despite the rough edges, a well-rehearsed, well-scripted machine.

Without a doubt, Tusk is Fleetwood Mac’s most adventuresome moment.

And one that they will never, ever repeat.

Tusk is a symbol.

In terms of being someone who has tried to inject a sense of possibility into the band, there needs to be a certain aggressiveness in order to do that because I think there tends to be a kind of complacency to sort of remain with the status quo, you know. Certainly on the Tusk album. That was an effort to try to, you know, broaden out the palette and, as you know, that process became something which was disallowed by the band on future albums, not because there was any lack of artistic success but because there was a certain lack of commercial success. And so that’s always been something that I’ve had to pit myself against, like it or not.

—Lindsey Buckingham, October 2, 2008 (the last
day of his fifty-eighth year on earth)