Climate change and capitalism: We can't confront one without facing the other

Amid this devastating storm season, we must talk about climate change — and the economic system behind it 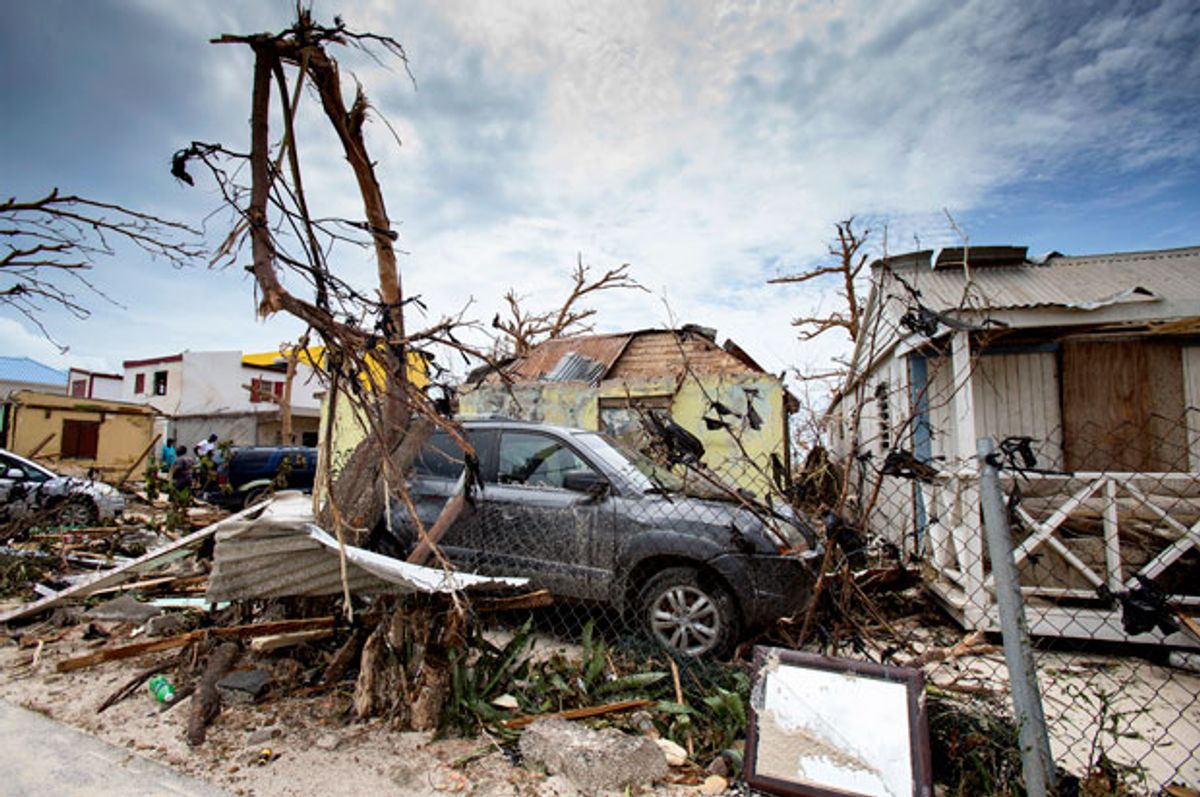 As Hurricane Irma approaches Florida this weekend, just over a week after Hurricane Harvey devastated southeast Texas and left at least 70 people dead, the climate change debate has taken on a new sense of urgency.

The bleak reality of what we face in the decades to come if we do not deal with the climate crisis today was sadly on display last week as historic floods engulfed the most populous city in Texas, displacing tens of thousands of people and causing up to $190 billion in damage. Now, with Irma generating some of the most powerful winds in recorded history, this reality will be on display once again in Florida.

It is becoming impossible to ignore the real-life consequences of global warming as extreme weather events become ever more prevalent. After Harvey, a consensus seemed to form among experts that we cannot talk about these disasters without talking about climate change. On CNN.com, environmental activist Mark Lynas went one step further when he declared that we now have a “moral duty to talk about climate change” and to resist “the attempted conspiracy of silence imposed by powerful political and business interests opposed to any reduction in the use of fossil fuels.”

“We owe this to the people of Texas as much to those of Bangladesh and India, and Niger,” wrote the prominent environmentalist, noting that climate change exacerbates storms like Harvey and Irma.

Lynas obviously isn’t wrong to link climate change to the extreme weather we’ve experienced around the world over the past two weeks. There is little doubt that our warming atmosphere contributed to the severity of Hurricane Harvey and Irma as well. Climate scientists have been warning of more extreme weather for two decades now. Lynas also isn’t wrong to say that we have a moral duty to talk about climate change in light of Harvey as well as the devastating monsoons that ravaged South Asia, which killed more than a thousand people.

The fact that many American politicians — including the current president of the United States — still deny that human-caused climate change is a real phenomenon that threatens our future is a moral disgrace. By rejecting climate science and thwarting efforts to combat this growing crisis, Donald Trump and his fellow Republicans are ensuring many more historic storms like Harvey and Irma in the future. It is a moral duty, then, not only to discuss climate change after Harvey, but to shame Republicans who are currently accelerating humanity’s extinction.

But it goes beyond simply discussing climate change. After Harvey and Irma we also have a moral duty to talk about the economic system that has brought us to this point. That is, we can no longer talk about climate change without talking about capitalism, which has laid waste to our planet and now impedes humanity’s effort to deal with the climate crisis it engendered.

This was of course the thesis of Naomi Klein’s 2014 book, “This Changes Everything: Capitalism vs. the Climate,” in which the author and activist posed climate change as a “battle between capitalism and the planet.” Klein convincingly argues that without radical changes to our economic system, we will ultimately fail to confront climate change in the radical way that is necessary in order to preserve our planet for future generations. “We have not done the things that are necessary to lower emissions,” writes Klein, “because those things fundamentally conflict with deregulated capitalism, the reigning ideology for the entire period we have been struggling to find a way out of this crisis.”

Simply put, capitalism is an economic system that prioritizes short-term profits over the long-term good of society (and the planet), and as a result encourages myopic self-interest that often has disastrous long-term consequences. This is evident in the behavior of multinational corporations that put profit over people. According to the logic of capitalism and the market, for example, it was entirely reasonable for ExxonMobil to mislead the public about climate change for decades, or for Koch Industries to skirt environmental and safety regulations to boost their profit rate. It was also reasonable for these companies to fund climate change denial groups and anti-science politicians, as their entire business model depends on the continued extraction and burning of fossil fuels.

In addition to promoting this kind of destructive behavior, capitalism is also a system that is based on endless growth, which has been sustained over the past few centuries by the depletion of our natural resources. It is becoming increasingly clear, however, that this addiction to endless growth is unsustainable on a planet with finite resources, and like all addictions it will eventually backfire spectacularly.

Last week the world saw how vulnerable modern society is to the forces of nature, and this weekend Mother Nature will display her power yet again. But Harvey and Irma are only previews of what humanity will face if we continue down the path of deregulated corporate capitalism. Civilization is built on human mastery over nature, but, like death, nature can never be fully conquered. “The animal merely uses external nature … man by his changes makes it serve his ends, masters it,” wrote Friedrich Engels in his unfinished book “Dialectics of Nature.” “Let us not, however, flatter ourselves overmuch on account of our human victories over nature. For each such victory nature takes its revenge on us.”

Capitalism has brought unprecedented material progress to humanity over the past 300 years, and for that it should be celebrated. Even Karl Marx once wrote of the “great civilizing influence of capital.” But he also recognized the economic system’s inherent destructive tendencies, and he would no doubt recognize today that corporate capitalism does not offer a sustainable future on Planet Earth.

If we fail to make radical changes to our economic system, the chances of successfully confronting climate change decline precipitously. And if we fail to confront climate change now, nature will surely take its revenge on all of us in the future.