Interrupting Big Daddy's meetings is neither an accident nor a harmless tic. It's been Ivanka's job for decades 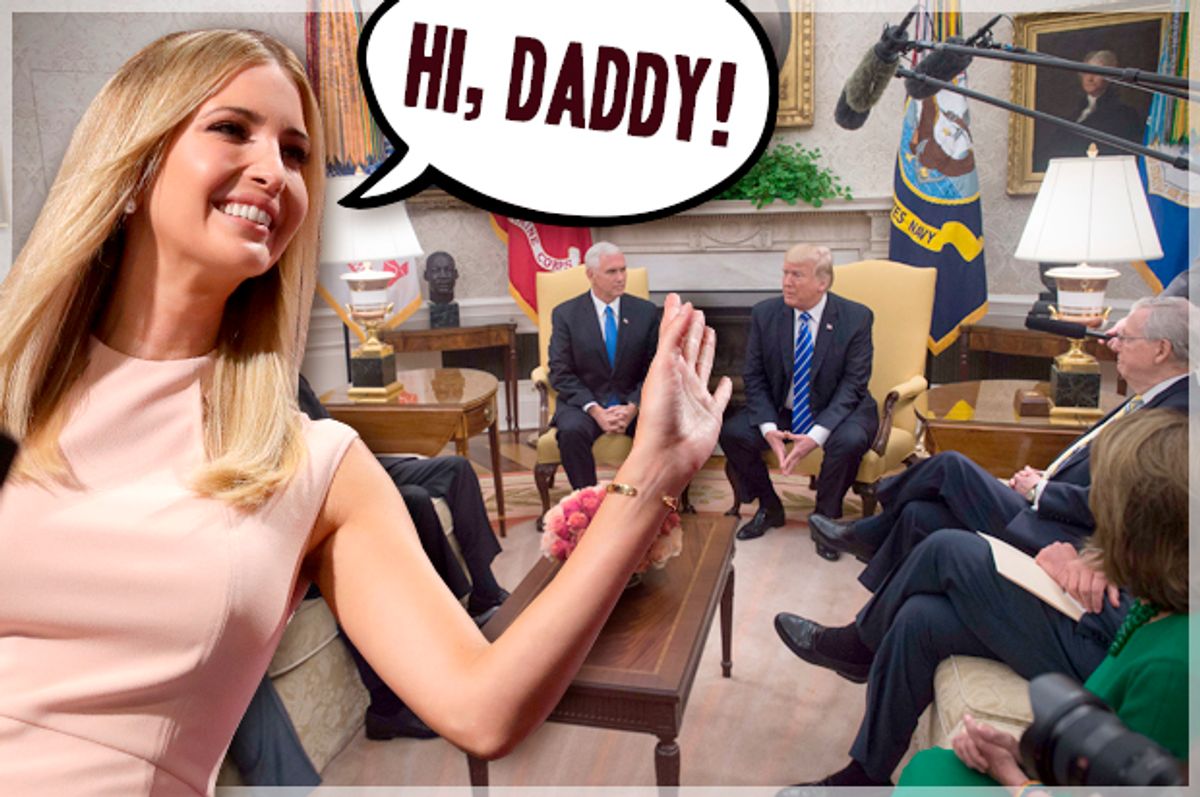 Congratulations to everyone with a “found something in common with Paul Ryan and Mitch McConnell, WTF?” square on their 2017, Amirite? Bingo card. During a debt ceiling and disaster relief meeting Wednesday between President Donald Trump and congressional leaders, first lady-daughter Ivanka Trump pulled one of her patented Oval Office pop-ins and, according to CNN, Republican leaders were “visibly annoyed by Ivanka’s presence.”

Some of us have been visibly annoyed by Ivanka’s presence for the last 18 months or more, but thanks, guys, for catching up.

By now we are all used to what CNN calls the “Ivanka Drive-By.” (Let that sink in for a minute, will you? Can you imagine the collective spasms the Fox News dog-whistle brigade would have had if any member of Obama’s family had cultivated a White House habit cutely nicknamed a “drive-by?”) It’s her irritating and highly calculated practice of interrupting meetings, including high-profile media interviews, just to say hi to Big Daddy. Fans of the cult classic film “The Room” must feel a twinge of recognition at these distracting pop-ins, with Trump blathering on, making about as much sense as Tommy Wiseau ranting on his rooftop, before turning the mood on a dime with a casual, “Oh hi Ivanka.”

I’ll give Maggie Haberman $5 to throw a plastic spoon at Ivanka next time she pulls this move.

CNN connects the contemporary Oval Office Drive-By with a habit Ivanka first cultivated back when she was 10 years old and a student at Manhattan’s Chapin School:

Hiding in a janitor's closet during recess, she would dial her dad, who would put her on speakerphone with whomever happened to be in his office.

"It was colleagues, it was titans of industry, it was heads of countries. He'd always tell everyone in the room how great a daughter I was and say cute things and ask me about a test I took," Trump told CNN chief political analyst Gloria Borger in an interview.

Raise your hand if you’re completely creeped out that a woman in her mid-30s — indeed, a White House employee and a CEO of her own company — is still calling her father collect, so to speak, to "say cute things" in front of important people. On its face, Ivanka’s habit looks repulsively needy and juvenile — we sent this simpering fool to have a conversation with Angela Merkel? — but it would be a mistake to read this as an indulgence Trump performs for his daughter's benefit. The Ivanka Drive-By is more likely a strategic tool — and not for the obvious reason.

It’s true that Ivanka has long served as Trump’s shiniest shield against criticism — even Hillary Clinton had to choke out a grudging admiration for his children, though she has to at least see Don Jr. and Eric for who they are, “Road House” goons in nicer shoes — and so at first the Ivanka Drive-By looks simply like Trump is showing off a nice piece of property he developed. Look at how elegant, how expensive, how code-compliant his daughter (or hotel, or office building, or wife!) is, how well her grooming and ability to agree a subject with its verb reflects upon him, the creator of this project! Surely he can’t really be three sacks of decaying flies stacked inside a trench coat if he can father such a respectable lady-daughter?!

But while Trump is always obvious, he’s not dumb when it comes to exploiting the obvious weaknesses of toxic masculinity. Remember how he demolished the Republican field of contenders during the primaries using his innate fluency with this language, while simultaneously winning in the eyes of his supporters, who understand it on a gut level as well. As Anna North points out in a Vox analysis of the advantage Nancy Pelosi enjoys over her peers, Trump’s go-to power plays always work best against other men.

Ivanka doesn’t materialize in the doorway like Bloody Mary in ballet flats to make Trump look like a better man. Good lord, when has he ever cared about looking like a better man? A better theory is that her little snippet of choreography is designed to help Trump use men’s own fears of humiliation against them. Ivanka’s presence subliminally disarms his male opponents — and isn’t everyone who’s not related to Trump an opponent? — because a real man, our culture tells us, doesn’t make another man look small in front of his children. He can bank on many men, since they are humans, defaulting to a "do unto others" approach that he wouldn't touch with Stephen Miller's cold dead finger.

If Ivanka’s massive political face-plants are any indication of her professional acumen, this has likely been her most mission-critical duty from the beginning, both at the Trump Organization and in the White House. She can play around with her piddly lady projects all she wants, but in the president’s eyes she’s probably still that 10-year-old girl interrupting meetings so he can size up who acts softer toward him when she’s in the room and use that "weakness" against them. (Trump himself lacks a moral code, of course, so this technique would never work in reverse.)

No wonder she's earned the nickname "Princess Royal" in Washington. Ivanka may keep trying to position herself as the voice of #WomenWhoWork, but as long as she plays along with these skits that cast her as a child so in awe of what her father does all day in his important office — witness the creepy "Daddy, can I go with you?" stunt they pulled at his tax reform speech in North Dakota on Wednesday, in which Ivanka basically pulled a drive-by on an entire state — she’ll be actively strengthening the conservative mindset that women are all basically children, mentally and emotionally. That has systemic, legal ramifications across the board in our lives, from health care access to workplace equality to how sexual assault laws are enforced and prosecuted. Donald and Ivanka are free to indulge in whatever weird daddy-daughter dance they want in the privacy of their own gold tower, of course, but the White House is a place for adults. If Ivanka wants to continue to pretend to care about women, she needs to leave the little girl act at home where it belongs.