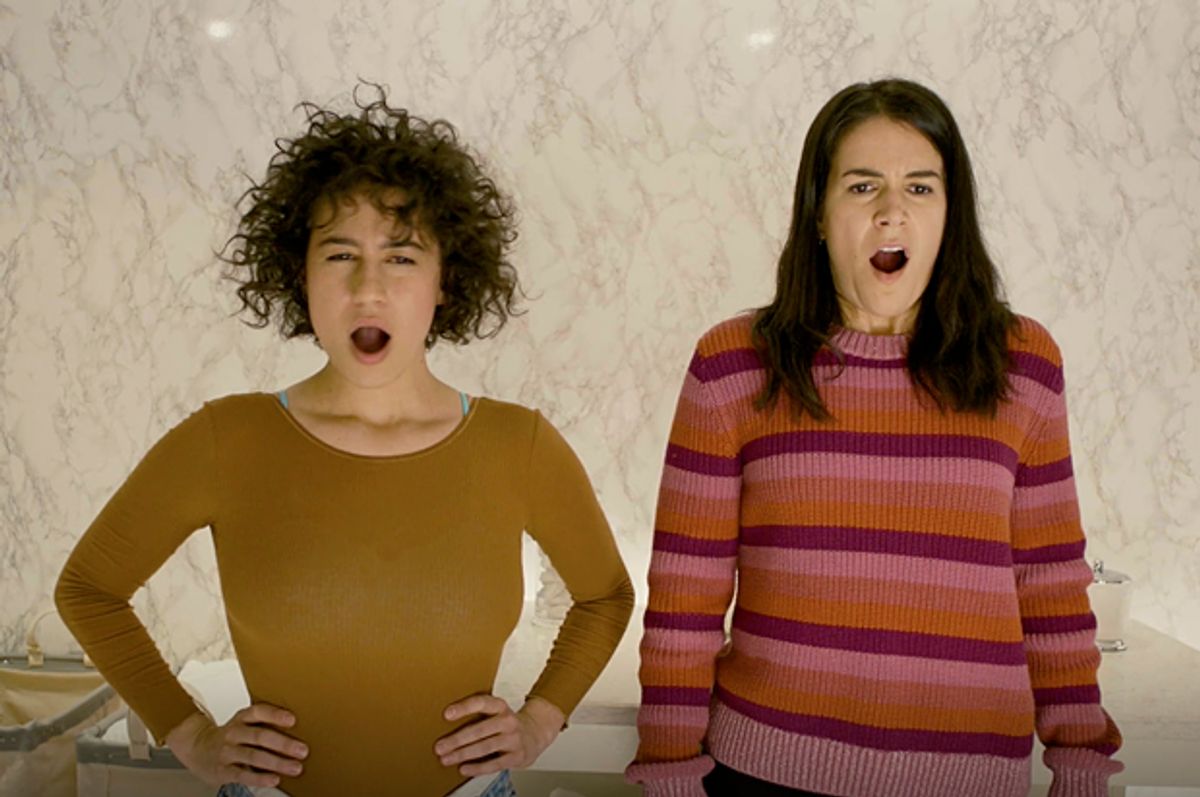 “Broad City” season 4 debuts Wednesday, Sept. 13, with the promise of prominent Trump resistance from co-creators and stars Abbi Jacobson and Ilana Glazer, partially in the form of a post-election anorgasmic Ilana.

That’s right, this over-the-top, sexually liberated character will spend a lot of season 4 desperately seeking orgasms. In doing so, she’s representing female never-Trumpers perhaps even more than the show’s creators realized, both allegorically and actually.

In the wake of the 2016 presidential election, Jacobson and Glazer had to rewrite much of a fourth season that was geared toward celebrating the first female president. Instead, they faced a country run by an “orange person” who admitted to sexual assault on the campaign trail and waged a “war” on women’s health from the start of his time in office. A season full of gazing at mirrored vaginas to overcome her character’s election-related anorgasmia offered “the perfect resistance art,” said Glazer to the Los Angeles Times.

What Glazer leaves out is that anorgasmia really deals with the fraught post-election psyche of her character’s demographic, liberal white women who didn’t vote for Trump while the majority of their white-lady counterparts did — that shameful 53 percent. Meanwhile, black and brown women turned out overwhelmingly for Ilana and Abbi’s beloved Hillary, with 94 percent of black women casting their vote Clinton-wise along with 68 percent of Hispanic/Latino women voters.

White, female Trump resistors showed various reactions — besides just crying, drinking, and sleeping a lot — to their peers’ disappointing voting proclivities. They wore t-shirts to assure non-white women that the election results weren’t their fault. They remembered that responding to sexist jokes with, “Hello, it’s 2016,” didn’t actually mean that sexism died in 2015. They were anxious, guilty, angry, sad and afraid — like women who experience anorgasmia.

A psychologist writing for Psychology Today named “fear of arousing repressed sadness” among the potential orgasm blocks for women. Perhaps Ilana, on a subconscious level, finds the perfect escape from her post-Nov. 8 emotions in season 4.

After all, women don’t have to be sexually repressed or conservative to lose their power of climax. San Francisco-based sex therapist Vanessa Marin told Refinery29 that while some of her female clients experience it due to a “lack of information” about sex and “shame,” others come to her identifying as “feminist, progressive, liberal” and as a result their inability to orgasm confuses them. So they blame themselves for their lack of sexual fulfillment.

Anorgasmia is much more common in women than men, presenting yet another obstacle for the former, who are just trying to survive in a Trump-run world. Sufferers may have never had an orgasm, or they may have “secondary anorgasmia,” in which they’ve lost their prior ability, like Ilana. According to the Mayo Clinic, causes for the condition include stress, anxiety, depression and embarrassment.

A certain level of shame, anxiety, sadness and a marked gap between men and women — is this a description of anorgasmia or the things white women like Ilana might think about when they mull over Nov. 8, 2016?

Turns out, Ilana is not alone when it comes to her major season 4 obstacle. Multiple twenty-something women living in New York -- white, black, and brown alike -- experienced a similar phenomenon shortly after the election.

Of the several anti-Trump New York women interviewed for this piece, only one didn’t remember any decrease in sex drive or ability to orgasm immediately after Nov. 8. Other responses ranged from an immediate “yes” to, “After [the election] it was harder to get wet — like to even start getting sexually excited took a lot more.”

"Rebecca," a 27-year-old living in Long Island, actually noticed what had happened to her after watching the trailer for “Broad City” season 4.

“I was like yes! This is it exactly!” she said. “Part of it was this feeling of dread that colored everything after, and part of it was why should you feel pleasure when things are going to shit?”

The election results had an additional traumatic sexual impact for Rebecca. In July, she went to get an IUD for fear of losing access to birth control due to Trump’s policy threats. The procedure “didn’t work” and ended up being “incredibly painful and traumatic” for her. “I basically wouldn’t have done that or felt the rush to do it if I wasn’t thinking about [Trump’s] administration and feeling intense fear about it.”

Bronx native "Maya," 28, who comes from a family of Mexican immigrants, also blamed the incoming administration’s policies for her diminished post-election sex life. “I was sad, so while I did have sex, I didn’t have orgasms,” she said.

When asked via text message if she had any trouble having orgasms shortly after the election, "Leah," a 27-year-old Brooklyn resident, responded, “Actually yes. I guess it was for like the first week after. I was so disappointed we weren’t going to have a female president, and it’s just a bummer. Women are still getting fucked by men all the time. It didn’t feel like fun on an individual level for a while.”

Another text came through, “Is this a common thing? Lol. I thought I was being weird at the time.”

Only as weird as Ilana Wexler.