A maternity ward in one Manila hospital does a brisk business. What does that mean to staff, clients and the world? 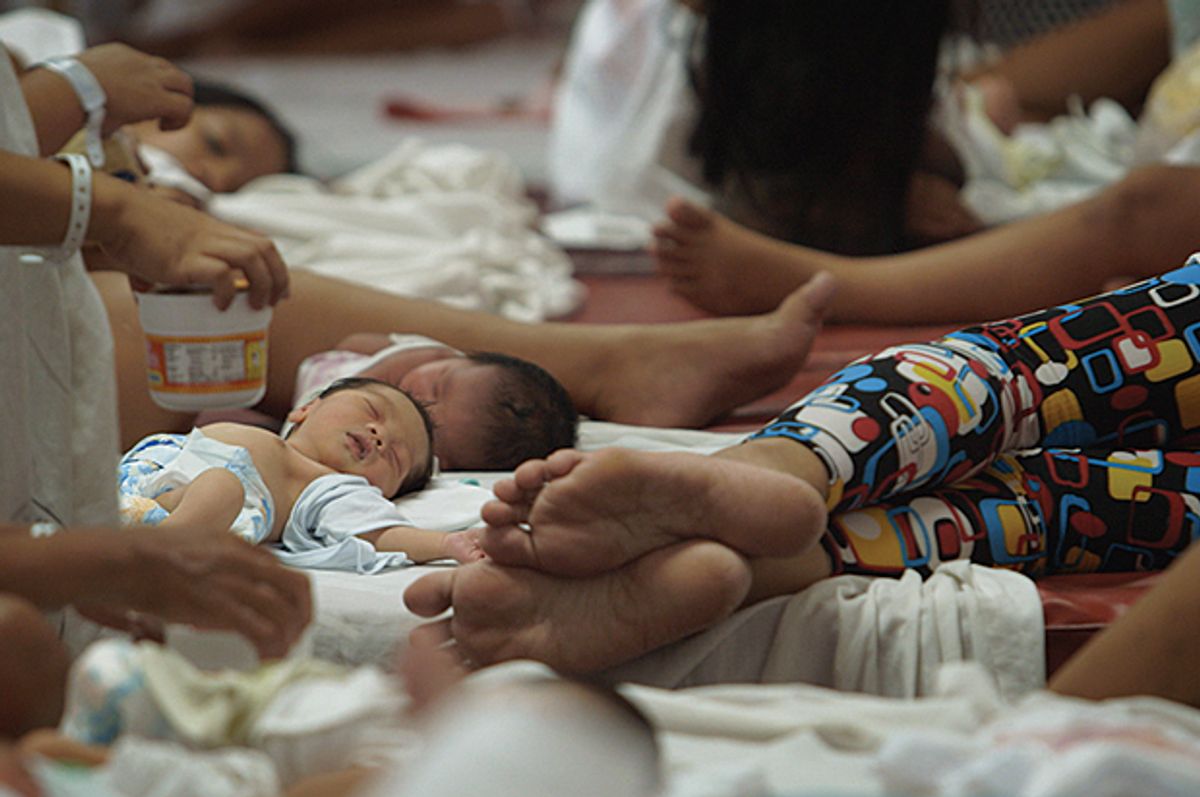 There’s a general lack of respect for and understanding of the Philippines, that Asian archipelago nation of more than 7,000 islands with a dark Spanish-American colonial history. All the news we get these days is that the country is being ravaged by conflict with Muslim militants and a drug war run by recently elected president Rodrigo Duterte, a reckless cowboy who once called President Obama “a son of a whore.”

But there’s much more to the Philippines. Start with life. Lots of it. With a mostly Catholic population that just recently surpassed 100 million, the Philippines is facing momentous opportunities and obstacles. The country is growing, but it is marred by poverty and government misdirection.

A new documentary, "Motherland," which opened Friday in New York City and will open on Sept. 22nd in Santa Monica, goes a long way toward remedying our lack of knowledge as it zeroes in on the people who populate what may be the busiest maternity ward in the world: the Fabella Hospital in Manila, which can sometimes witness 100 births in a 24-hour period.

Director Ramona Diaz takes a searing, honest, cinema vérité approach, immersing herself, and us, in the overcrowded, sometimes chaotic, always emotionally heightened, conditions of the ward.

We get to see life beget life on a most personal level, and suddenly the Philippines no longer seems so far away. Salon asked Diaz, a veteran filmmaker ("Imelda," "Don’t Stop Believin’") and Guggenheim fellow, about"Motherland."

How did you come to make "Motherland"?

While I was in Manila researching a film about a controversial reproductive health bill and its attendant social and cultural drama, a friend advised me to visit Fabella Memorial Hospital, the busiest maternity hospital in the region -- “the baby factory,” as it was referred to locally. When I visited that first time, I knew immediately that I had found the film that I was going to make — that I had to make. It was immediately evident that all the themes that I wanted to tackle — reproductive health, reproductive justice, maternal rights — were contained within the walls of the hospital. I pivoted and made "Motherland" instead.

What was the relationship like between you and the mothers and hospital staff?

The media has covered Fabella Hospital in the past — the BBC, CNN, etc. They’re used to having cameras around for a day, two at the most. What was unusual was the length of time I wanted access; six weeks, 24/7. Or, as much as we could shoot without driving ourselves to the ground (it ended up being 17-hour days).  I think in the beginning the staff didn’t really understand why I wanted that much time, but slowly they came to realize that it was stories over time that I wanted to capture and not necessarily just the story of the institution. I also spent a month at the hospital before shooting began and got to really know the staff. I had gotten access to the entire hospital through the Department of Health but it was important that the nurses and doctors and caretakers understood my intentions. I believe they came to trust me because of the time I spent at the hospital before actually starting to film.

Gaining the mothers’ trust was more tricky. Because I wanted to focus on the mothers more than the staff, I had to quickly get them to trust me because by the time they walked through the hospital doors, we were rolling. I was (and always am) aware of the power dynamic between them and me. Of utmost importance to me was that the patients understood that their getting care at the hospital was not contingent upon their giving me access. That they could say no and they would still get the care they needed. Of the women I spoke to, around 80 percent agreed to participate, and only 20 percent refused. There were times that we would stop filming, sit with them and just talk.

It wasn’t always smooth, of course. After all my years filming real people, I knew that there would be days when they wouldn’t be in the mood and I made it very clear to them that they could tell me that and we would back off that day, or that morning, or that hour. I’ve found that once you give people that option, they usually don’t take it. The one thing they couldn’t do, or it was my most fervent wish that they didn’t do, was back out once they'd committed.

There is humor in your film about something many consider a depressing topic. Why?

There is humor in the film because the women in the film are funny. Humor saves them. I think without humor, all the difficulties and indignities that poverty brings would overwhelm them. Laughing is key. But, hopefully, the audience laughs with them, not at them.

How has making the film changed your view of the human population explosion?

I don’t think it changed. I think it was reinforced. For an emerging economy like the Philippines, a country which has a land mass the size of Arizona, it has approximately a third of the population of the U.S. How is that tenable? The Catholic Church holds a lot of power in the country and they’ve been against the use of contraception or any kind of family planning, except for the rhythm method, and against mandatory sex education. Fortunately, the country is slowly turning a corner and is untethering its ties to the Church ever so slowly. Education, too, is key, as evidenced by the women in the film who turned down birth control methods such as the IUD. It’s going to take another generation but I believe slowly, it will happen.

President Duterte has been in the news a lot. Did his war on drugs have any impact on your film?

No, not on "Motherland."