There will be blood: "Republicans have a binary choice: fight for President Trump, or die"

Suggesting that conservatives must choose between Trump and death is not innocent; it points toward civil war 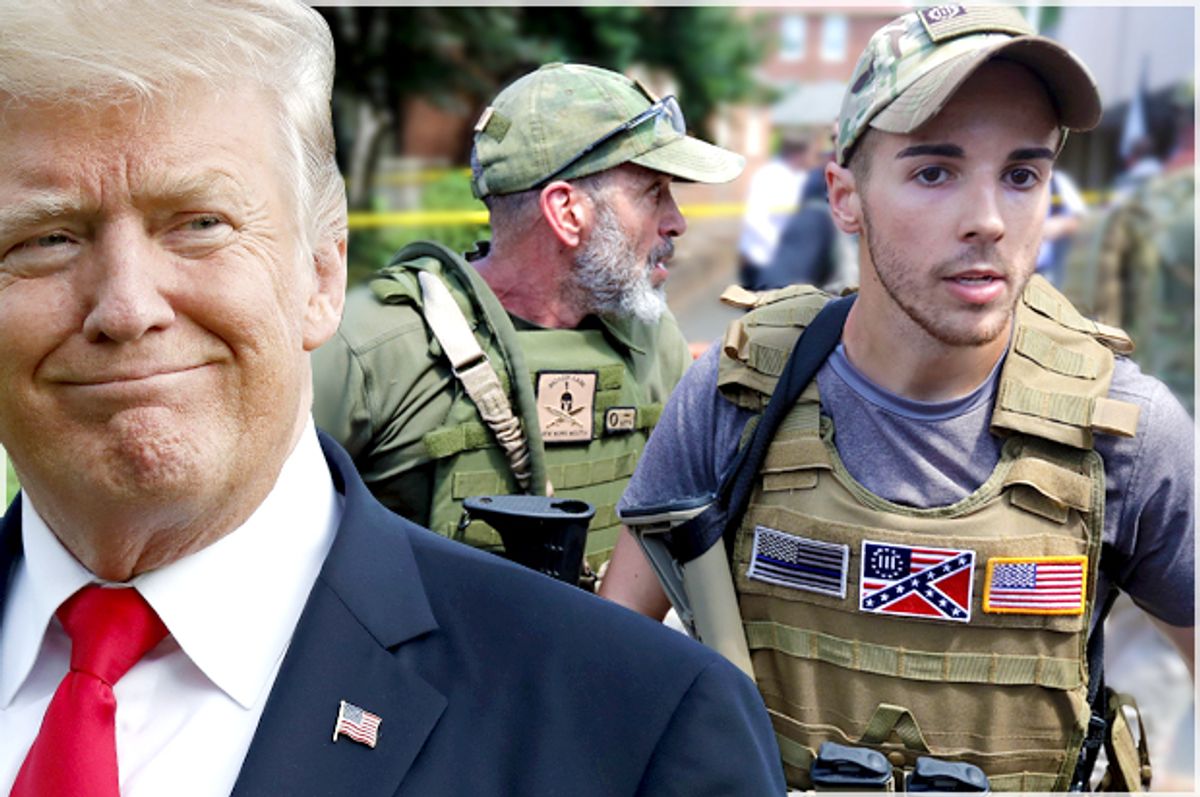 Propaganda is politically persuasive speech. It comes in various forms.

In a modern society, propaganda is omnipresent. It is one of the primary tools that governments and the powerful use to manipulate the public in order to maintain control. For example, propaganda is circulated on a daily basis by the supposedly neutral "experts" who write editorial columns in America's newspapers or online and appear on cable news -- but who are in fact on the payrolls of partisan interest groups, public relations firms and political organizations.

The CIA and the broader national security state manipulate American (and global) public opinion through their contacts in the Hollywood film industry and mass media.

Advertising is the propaganda of capitalism.

During World War II, children's illustrator Dr. Seuss and legendary filmmaker Frank Capra, among others, worked as propagandists who helped to maintain American morale. Most recently, Russian and other operatives conducted one of the most successful propaganda operations in human history when through disinformation ("fake news") circulated on Facebook and other social media they were able to help Donald Trump steal a victory in the 2016 presidential election from Hillary Clinton.

Ultimately, propaganda involves a mastery of communication. And in the written form, the best propaganda is compelling, witty, seductive and truthful.

Writing at The Hill, Frank Cannon's opinion column "Republicans must fight for Trump, or conservatives will lose the country" is none of those things. This makes it no less dangerous.

Cannon's essay mostly consists of boilerplate, tired, right-wing talking points about how Trump will "drain the swamp" (a joke given that he leads one of the most corrupt administrations in American history), that he is "pro-American" and "patriotic" (an odd claim given Trump's fascist views and likely collusion with Russia to undermine the country's democracy) and that "Christian" values led him to victory. That one is especially strange given Trump's cruelty to the poor, love of violence and life of gangster capitalism and limitless avarice.

Cannon's editorial contains some comedy as well; he bizarrely suggests that black and brown people will somehow be won over by Donald Trump, an overt white supremacist and bigot. And of course, Cannon cannot resist the political paraphilia that is the right wing's obsession with "political correctness," which many conservatives consider to be an evil force that somehow oppresses white people.

The heart of Frank Cannon's editorial is the following passage:

Conservatives are beyond foolish if we fail to recognize that we are engaged in a death battle for the soul of America. Trump is an imperfect but direct counter to what has heretofore been a one-sided story of decline and impotence now on vivid display in a GOP-controlled Congress. The left is far advanced in its agenda to destroy the American constitutional system, including federalism, limited government, the rule of law, and the rights of the people to rule themselves.

If President Trump can now deliver on any form of economic renewal, pursue his pro-life agenda in a serious way, protect conscience, and continue to display a proud nationalism, he will be poised for one of the great comebacks in American history.

No president can govern effectively alone. He needs our support. Republicans have a binary choice: fight for President Trump, or die. The time to fight is now.

Cannon's threat that Republicans face a binary choice between Trump and death is but one more example of the nightmare-dreams of violence and a second civil war that are peaking under Donald Trump's regime. Movement conservatives and Trump supporters want blood. Their opinion leaders are inciting them to violence.

Trump himself has repeatedly threatened his enemies with violence, including Hillary Clinton.

The National Rifle Association has featured commercials and commentaries telling its mostly white male right-wing members to buy guns in order to protect themselves from "liberals," "progressives," "anti-fascists," "terrorists" and of course black and brown people. Right-wing bloviators such as Alex Jones, Michael Savage and Mark Levin have repeatedly advocated a second American civil war and the need for violence against liberals and the other "enemies" of Donald Trump and the conservative movement. Jones has even gone so far as to publicly fantasize about personally killing liberals and "traitors" if America's second civil war comes to pass.

Right-wing obsessions with violence and armed revolt are nothing new--see the fears of a "New World Order" during Bill Clinton's presidency. They have reached a fever pitch because of the powerful hold that Donald Trump's authoritarian regime has over tens of millions of conservatives and other members of the white right. Conservative allusions to violence and death if their agenda is not implemented are also part of a decades-old pattern in which right-wing ideology becomes a type of quasi-religion for its adherents, and the "paranoid style" rules to the extreme.

Appeals such as Cannon's have already caused death and harm to the American people.

Dylann Roof, a white right-wing terrorist who killed nine black people in a Charleston, South Carolina, church in 2015 was radicalized by the right-wing media.

The white supremacists who ran amok in Charlottesville, Virginia, several weeks ago, killing Heather Heyer and injuring dozens of other people, were also radicalized by the right-wing media.

Right-wing militias and other groups have been identified by law enforcement agencies as the greatest threat to America's domestic safety and security. As of 2017, they have killed hundreds of people and injured many more.

Cannon's recent editorial embodies a strategy known as stochastic terrorism where political violence is encouraged, but when it takes place there is denial about the causes and origins.

When more violence comes from white right-wing domestic terrorists -- and it will -- the mainstream news media will not ask, "What is being taught in their churches?" Or "When will white people condemn such behavior?" Or "Who radicalized these white Christian men?" Or "Where are they learning these values?"

The answer is obvious. The right-wing news media and opinions like Frank Cannon's (will) have led to the bloodletting.