"Who is Number One?" asks "The Prisoner" 50 years later 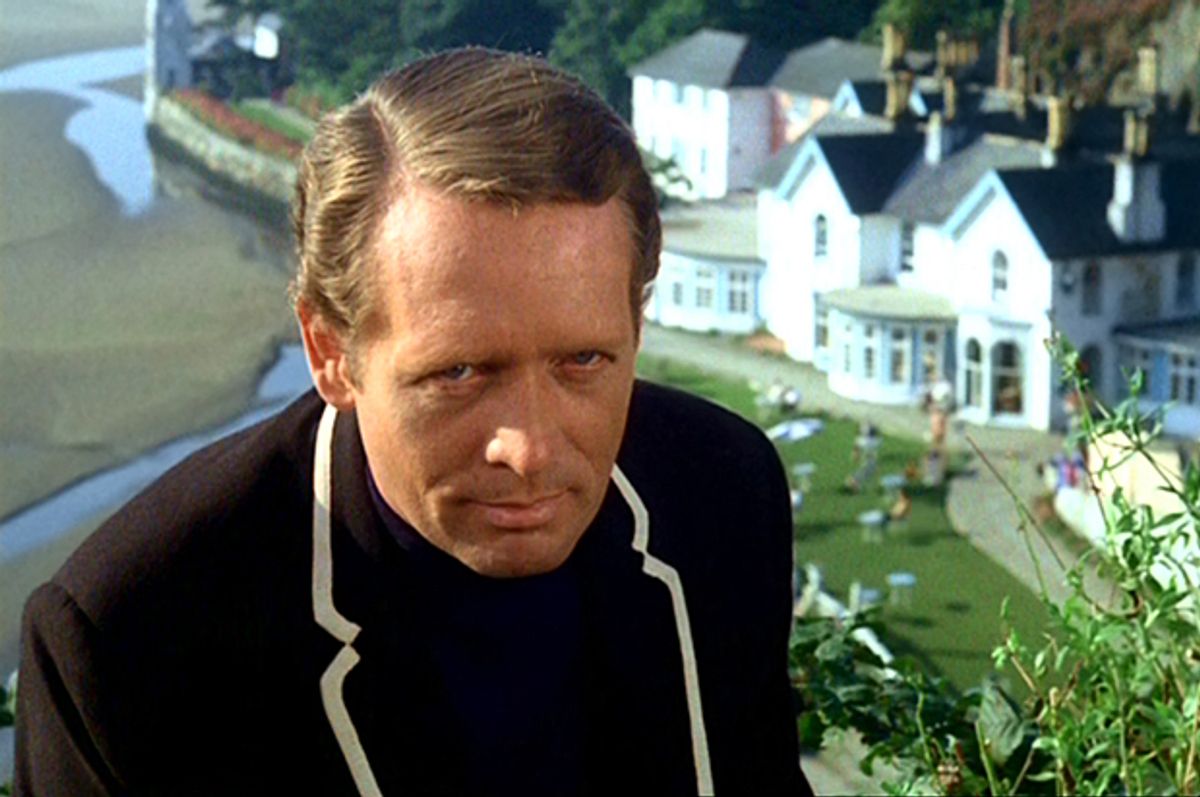 Patrick McGoohan as The Prisoner/Number Six in "The Prisoner" (ITV)
--

Rarely does a television show portend a future such that you think that some degree of magical fortune-telling was reverse engineered into how it was made. Premiering 50 years ago in early September, "The Prisoner," both starring and created by Patrick McGoohan, certainly fits that bill — extra certainly, you might say, during these 2017 times.

McGoohan had starred in the thriller "Danger Man," an espionage series, from 1960-62, before hitting upon the idea of something rather further out with "The Prisoner," which would comprise 17 episodes about a man who resigns his job in London, only to be gassed in his apartment moments thereafter, and taken away to an island seaside community called, simply, the Village.

The inhabitants of the Village all have numbers rather than names, with McGoohan’s character being Number Six. His chief adversary is Number Two, which prompts the famous query of “Who is Number One?” Who is Number One indeed.

The opening sequence to "The Prisoner" is a short art film unto itself, which serves notice that we are not watching an ordinary TV program. There’s an image of a forebodingly clouded sky, a flash of thunder, a barren open road, a Lotus Seven Series II hurtling straight for us out of the background, then a close-up of McGoohan’s face, which is set in the defiant expression of a man about to carry out a decision based on principle.

We watch him angrily resign somewhere near the Houses of Parliament, then observe as the up-until-now objective camera work shifts to subjective perspectives of the various people in cars trailing McGoohan back to his flat. The gas is piped in, and away we go.

The first episode of "The Twilight Zone," from October 1959, called “Where Is Everybody?”, was a bit similar in premise. An astronaut wanders a town he has never been in before, unsure of how he arrived there. No people are present, but as McGoohan’s character begins his explorations of this idyllic resort, with its bounding mountains, rolling beaches, terraced gardens, and Victorian architecture, he quickly realizes that he is in a community with people bustling about their business.

That first episode, “Arrival,” introduces the setup: Number Six wants out; this chief magistrate-type figure called Number Two wants information; there’s a floating, giant milky sphere that emerges from out of the horizon to track you down if you try to escape; and everyone thinks, to use a line from Melville, exactly the same way. Save for, of course, Number Six.

Television had never seen anything like this. It’s like the remnant of the spy genre, an afterlife situation — while still alive — for a Bond-like character, with sci-fi elements, borrowings from fantasy, political horror, and just flat-out horror, stemming at first from fear of the unknown, then mushrooming ever larger as we see that this is a world in which the individual has ceased to exist, gobbled up by a society-driven need to align yourself with a group, lest you be crushed underfoot by it and deemed a transgressor.

Sound familiar? The plight of Number Six is the plight of anyone who seeks to more frequently look inward rather than exclusively outward in what we still call our culture, for lack of a better term.

If you look outward enough, and point, point, point at all that the people in your group you deem to be wrong, then you never have to look at who you are, and you can call yourself a good, wonderful person because you are very showily pointing at the right bad things, with the requisite 1,752 Facebook likes stamping your social media passport to show for it.

I began watching "The Prisoner" when I was just out of college, when I’d hustle over to a video rental place in Cambridge, taking advantage of their “Ten tapes for ten bucks” Friday night deal. As I sat watching — this would have been the early 2000s — I would shudder with relief, almost, that this was but a TV program, that surely in our world you couldn’t get in trouble, or be ostracized, for having thoughts, and expressing them, that were endemic to you. I’m not talking pillaging thoughts, or molesting thoughts; just thoughts whose first loyalty is to you, not the oft-forced loyalty of a group.

Your individuality wasn’t a deterrent to happiness, and happiness wasn’t something that had been forfeited by a process of moving off of the line of what was best for you, to what was compliant with the directives and threats of a group. That’s what "The Prisoner" is about, that idea of the members of a society downshifting, en masse, from the idea of living a life, to simply existing. For the latter is what everyone in the Village does, save for Number Six, and Number Two, ironically, who gets what life force he has through the pushback that comes from the man who refuses to be a forced resident.

There is a succession of Number Twos, as it were, given that Number One isn’t a big fan of second chances, with the latest Number Two losing his job after Number Six manage to keep himself intact. Whatever information the management staff of the Village wishes to extract from Number Six’s head remains there, and he’s never coerced into falling into line with the residents, who seem more or less content. They are mostly vapid, all but lobotomized in thought, uttering their singsong departure line of “Be seeing you,” as if they are ghosts confirming to one another that they are still somewhat visible.

In a sense,"The Prisoner" is a cat-and-mouse game at the level of an individual’s soul, but I think that particular game stands in aptly for the challenges we face today. The real battle isn’t on political fronts, I’d say, nor is it in terms of the social justice cavalry always riding in to right some wrong, never mind if said cavalry is made up of members who do all kinds of wrong in arenas of their own lives. What matters is the kind of wrongs you do; certain forms are allowed now, certain forms are not. Disagree with someone, and hey, you can band together with your crusading friends to suppress them, get them fired, attack their loved ones, you name it, all in the name of justice.

Which is how the cavalcade of Number Twos operate. But one crucial thing "The Prisoner" reminds us of is that the only chance we might have, collectively, is going to be based on how strong we are individually. It’s that idea that is, in a certain sense, the Village’s undoing, even as it comes close to breaking Number Six. Think of how many people you know who talk the same way, use the same exact phrases (“at the end of the day”), like the same TV shows, cite their fondness for Netflix, virtue signal their existences away in public forms, but screw you over privately, and on and on.

We are not individuals anymore, and part of the reason is out of fear, not having the self-confidence to cultivate our own interests and confront our respective shortcomings, always looking for affirmation — and yet another means of being enabled — in things that aren’t real. Those Facebook likes, for instance, which lead to a lot of virtual people, living virtual lives, with virtual relationships, virtual accomplishments, a dearth of real meaning, real connection. Existing, not living. In other words, welcome to the Village, baby. You’re not going to die — nope. Because in a way, you’re already dead.

Number Six represents someone as alive as can be, which is why he’s the threat he is. A jarring contrast is often a threat. It throws mistakes into relief, shows flaws in a system, and it can be the enemy of the indolent, the people who have accepted mediocrity, with no self-belief that any heavy lifting can be done — especially when it goes against the grain of the mores of an age — to seek meaning and depth.

What is privileged instead is the fear-driven desire to simply have no complaints lodged against us from our peers — which is what we now seem to seek as a life goal — and to have no one ever clock on to the huge disparity between the person we truly are and the stage-presentation version of a self we labor to have on perpetual display.

This is tiring. It’s also the gateway to nullity. In the world of Number Six, Number Two is always vanquished. Number Two is not someone who would enjoy our age — all of the Number Twos are too smart for it — but he would know how to present himself in it. You always have the feeling that the Number Twos hate themselves, which is why they redouble their efforts against Number Six, but don’t take it too badly when he bests them. Or, at the least, avoids becoming one of them.

You sense a world-weary envy and longing from the Number Twos. “If I could only make like Number Six does . . . ” Then again, Number Six is hunted and always has to be “on,” without forsaking, interestingly, attempts to trust people along the way, people who might also want to commandeer a boat and hightail it from this village of nullity, of fear, of samey-ness, of glassy existence rather than rippling life.

But strike a blow on behalf of the propriety of your unique, important soul, and spend some time with a few episodes of "The Prisoner." At the end of the day — see what we did there? — anyone can tune in for the latest episode of "The Walking Dead" because that’s the thing pushed under your face and pushed forward by the galloping din. But you deserve more, Number Seven, or Number 500,932 or whoever you are, don’t you?

You’re allowed — just not encouraged — to be your own person. Be it. And be seeing you.