If you think Trump is radical, wait until you see who the GOP is likely to nominate in Alabama 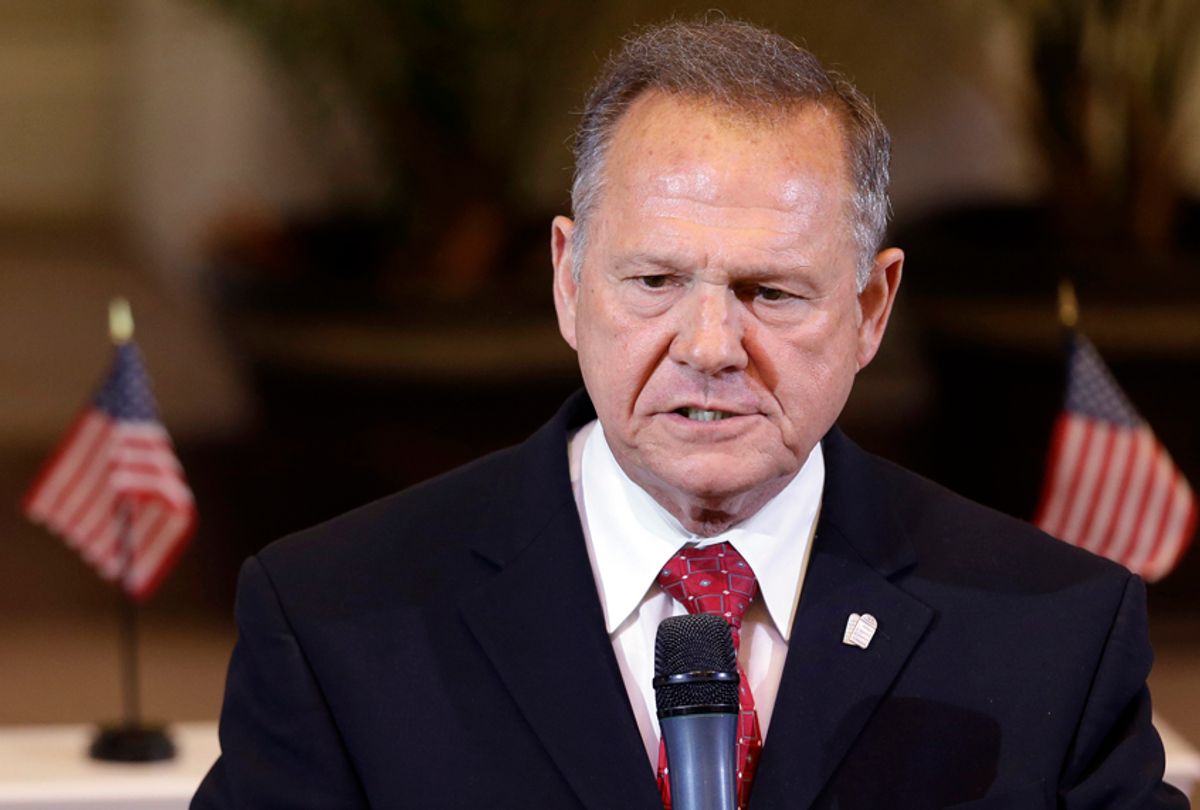 Roy Moore, the twice-dismissed state judge from Alabama, is perhaps the best embodiment of just how radicalized the Republican Party has become in recent years.

Though still loathed by many within the GOP's leadership in Washington, Moore's Christian supremacism and his bellicose demeanor has made him a mainstream figure within national conservative circles, who just a few years ago shunned him as too extreme.

Even Alabama voters, as conservative as they are, had not been as interested in Moore in years past. In the 2006 Republican primary, Moore got walloped by a 2-1 margin in his challenge to Gov. Bob Riley. Running again for governor in 2010, he finished in fourth-place, with 19 percent of the vote in the primary.

Left for dead by many state political observers after his defeat in 2010, Moore has made a comeback in this year's GOP Senate contest, all without changing any of his viewpoints — as President Donald Trump seems to have radicalized the conservative base in ways that have benefited Moore immensely.

In the interview, published by a left-wing YouTube user named Lone Star Q, Moore wouldn't say what he thought the penalty for homosexuality should be — although he did not seem to have any sort of opinion on whether it should be a capital offense, a belief that some hard-line Christians actually share.

Before he resurfaced as a Senate candidate, Moore brought himself national attention in 2015 when, as the Chief Justice of the Alabama Supreme Court, he ordered lower-level probate judges to refuse to obey the U.S. Supreme Court's ruling in Obergefell v. Hodges, which legalized same-sex marriage. His open defiance of federal law, which many compared to former Alabama governor George Wallace's refusal to desegregate the state's schools, led to Moore being removed from his judiciary position. It was the second time that he had been dismissed from the court. In 2004, Moore was removed for refusing to remove a large monument featuring the Ten Commandments which he had erected in front of the Alabama Supreme Court building.

Following his first ejection from the bench, Moore largely disappeared from the national radar even as he strengthened his radical associations. He appeared multiple times on the radio show of a pastor named Kevin Swanson who has repeatedly called for executing lesbians and gays or imprisoning them for life. He backed the "birther" conspiracy theory that claimed that former President Barack Obama was not born in the United States. Moore also frequently touted Neo-Confederate philanthropist Michael Peroutka who, in turn, lavished hundreds of thousands of dollars on him and his wife, Kayla.

Moore's propensity to view the law as his personal plaything and his open advocacy for Christian nationalism has made him hated among business-oriented Republicans who are more interested in tax cuts than establishing Zion. Up until the age of Trump, that was enough to keep him from federal aspirations.

Now, however, the rules are completely different for the Religious Right — largely thanks to President Trump and his successful efforts to pry away support of evangelicals in the GOP primary from Texas Sen. Ted Cruz. Not being a man of much faith, Trump offered something he knew of: worldly power. Trump made his first real play for the Religious Right in December of 2015 as he openly offered to restore Christian supremacy to America.

"Christians, their power is being taken away," Trump said in a December 2015 interview with Christian nationalist leader Tony Perkins. "I just watch it and I get angry at it. You look at what is going on with other religions, you look at, as an example, what’s happening with respect to Muslims and others where perhaps they just band together better or something. But, you know, the Christian, every year, you just see it more and more."

As part of restoring Christians to their rightful dominance, Trump promised that if he were elected president, he was going to put an end to people saying "Happy Holidays" at year's end.

"One of the things I always say, and I say it lightheartedly but I mean it," Trump told Perkins. "It’s actually not supposed to be so lighthearted, and I get standing ovations, especially in Iowa and certain places, is we are going to start saying ‘Merry Christmas’ again. Because you go into these stores and you don’t see anything having to do with Christmas and it’s disgraceful, frankly, as far as I’m concerned, and that’s the way it should be and I feel strongly about it."

That was music to Perkins' ears, given that he has explicitly argued that the First Amendment's protection of religious freedom should not apply to non-Christians or to Christians who have liberal social views. In 2000, Perkins' group even publicly condemned the fact that a Hindu priest was allowed to give a prayer in the U.S. Capitol. Perkins' Family Research Council later was forced to retract the statement after it received a torrent of criticism. (Incidentally, Moore himself also once expressed a similar view about the First Amendment.)

With Trump opening the way for him, Moore has managed to merge his radical Christian supremacist views with the national conservative movement. The synergy is partly due to political considerations, since Moore finished in first-place in the Aug. 15 Republican primary, making him the only remaining competitor to Luther Strange, who was appointed to temporarily fill the Senate seat vacated by Jeff Sessions after he became Attorney General. Strange is a close ally of GOP Senate leader Mitch McConnell, a man whom far-right Republicans have long despised.

Due to their hatred for McConnell, conservative activists inside the state and out have been lining up in droves to endorse Moore, even though Strange is the candidate that Trump has publicly sided with. (The president's endorsement of Strange appears to be an artifact from back when he and McConnell were on better terms. As Moore's star has risen, Trump's aides say he is waffling in terms of who to support.)

Last week, the former judge received the endorsement of Rep. Mark Meadows of North Carolina, the leader of the far-right faction of House Republicans who call themselves the Freedom Caucus. Moore has also received the endorsement Ken Cuccinelli, the head of the Senate Conservatives Fund, a group that has long bitterly opposed McConnell; Mike Huckabee, a former GOP presidential candidate who is also the father of Trump administration spokeswoman Sarah Huckabee Sanders; and Actors Kirk Cameron and Chuck Norris.

Ahead of the Sept. 26 primary, Moore maintains all the momentum in the race. He has not trailed in any public poll conducted and has double-digit leads over Strange in several polls.