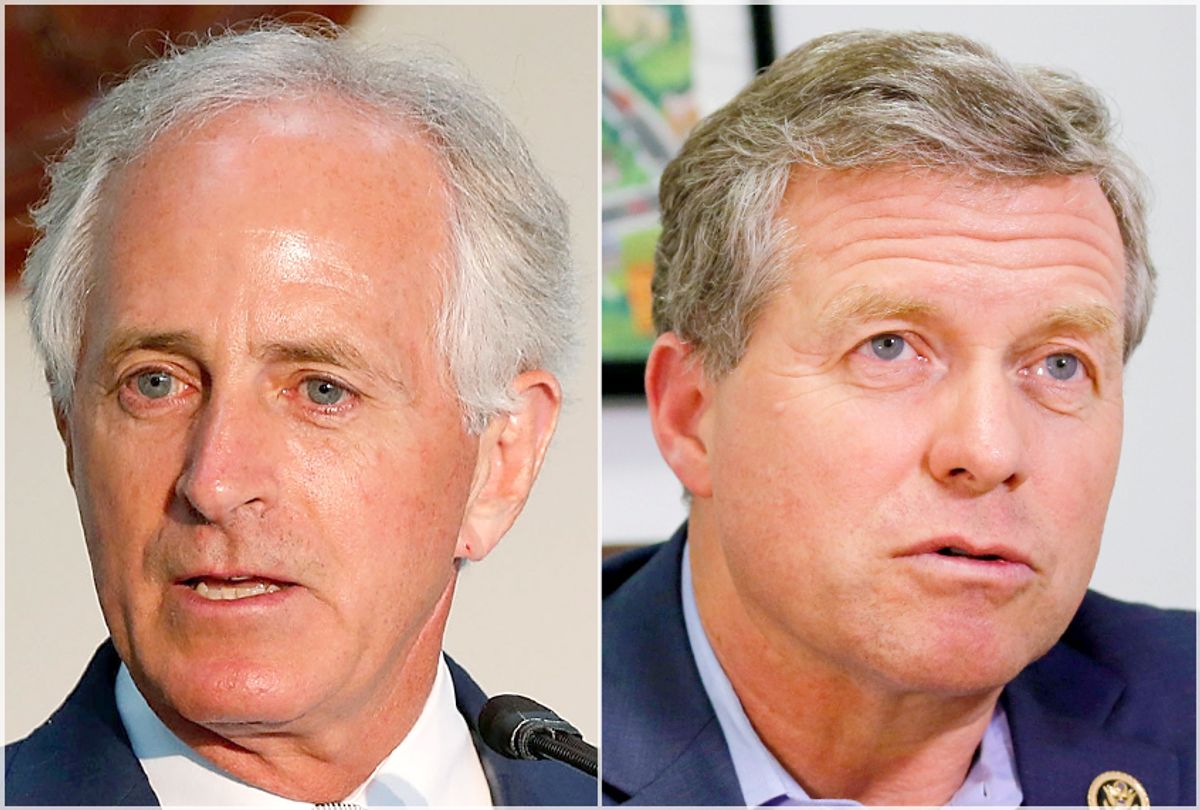 Republican members of Congress returned from an August recess in which they avoided terrible headlines by doing their darnedest to avoid their constituents, only to face an even bleaker political landscape awaiting them in Washington. With few legislative results to tout, several congressional Republicans have opted to head into 2018 by taking the road of least resistance: retirement.

While a president’s party typically faces strong headwinds in the first midterm after winning the White House, it clearly spells bad news for Republicans when popular incumbents retire because Donald Trump has become toxic after only nine months in office. With Democrats effectively gerrymandered out of power, the president's historically low poll numbers and tarnished brand among Republicans in Congress may prove to be the only hope for any real opposition to his far-right agenda.

Lost in the coverage of back-to-back major hurricanes battering the southern coast of the mainland U.S., the biggest political development over the past week has been the back-to-back surprise retirements announced by moderate House Republicans who represent swing districts -- and the open flirtation with that idea by a popular red-state senator who until recently was viewed as a top Trump ally.

Sen. Bob Corker of Tennessee told CNN on Monday that he is “still contemplating” a run for reelection. The Republican chair of the Senate Foreign Relations Committee, once considered a top contender to become Trump’s secretary of state, conceded this week: “I have not decided what I'm going to do in the future."

Just last month, Corker was targeted for public retaliation when he responded to Trump’s statements about the white supremacist violence in Charlottesville by admitting that the president “has not yet been able to demonstrate the stability nor some of the competence that he needs to demonstrate in order to be successful.”

Also on Monday, Rep. Dave Trott of Michigan, a 56-year-old Republican only in his second term, announced that he will not run for reelection. As the third Republican congressman in less than a week to announce his retirement, Trott fanned speculation that the GOP will soon see other Republicans who hold these marginal seats head for the exits. Another Michigan Republican, Rep. Fred Upton, may retire or run for the Senate, according to USA Today.

Already this year, 14 House Republicans have announced plans to bow out of the 2018 midterms, and a total of 17 have decided on a different path in the Trump era. Former Utah Rep. Jason Chaffetz left without delay earlier this year, resigning his seat for a spot on Fox News. Republican strategists are particularly bracing for more retirements in tough swing districts -- since such a flood could help Democrats retake the House in 2018 -- but the brewing Republican civil war could just as easily prove disastrous for the GOP.

About a half-dozen pro-Trump Republicans have opened primary challenges against Republican members of the House. Even pro-Trump incumbents like North Carolina Rep. Robert Pittenger, who dismissed protests against police brutality as merely black residents expressing jealousy of the success of white people, have been targeted for being insufficiently supportive.

Trump-inspired candidates have also emerged to challenge Republican Sens. Dean Heller of Nevada, Jeff Flake of Arizona and Roger Wicker of Mississippi, reportedly at the behest of recently ousted White House adviser Steve Bannon. Newly returned to his role atop Breitbart News, Bannon has begun holding private meetings with possible challengers to Heller, Flake, Corker and Wicker – and is coordinating with conservative mega-donor Robert Mercer to fund the intra-party warfare.

Bannon was thought to be behind the move by Trump’s political arm to air ads against Heller ahead of the Senate’s contentious, and ultimately failed, vote to repeal Obamacare. And it was Trump’s handling of the Obamacare repeal that caused Rep. Trott to recently lash out against Trump, according to unnamed Republicans who attended a closed-door GOP meeting in July. “He said he felt the president could have done more to get the bill across the finish line,” Politico reported. Trott took his criticism public in August when he called out Trump’s response to Charlottesville.

Trott, like Rep. Ileana Ros-Lehtinen of Florida and Rep. Dave Reichert of Washington, was part of a 2018 Republican Retirement Watchlist put out by the Democratic Congressional Campaign Committee. House Republicans bracing for a brutal 2018 election have even started a new incumbent-protection effort called the “Primary Patriot” program, as the Times pointed out. By comparison, 17 House Democrats declined to run for reelection ahead of the Democrats' historic defeat in the "Tea Party midterms" of 2010. Just seven Democrats have left or announced plans to leave the House this year, and nearly all did so in pursuit of higher office.

Ros-Lehtinen and Reichert are two of the 23 Republicans who represent districts that voted for Hillary Clinton over Trump in 2016. Democrats need a net gain of 24 pickups to take back the House of Representatives. The more GOP retirements there are, the better chance Democrats have of hitting or exceeding that number. Democrats hadn’t included Rep. Charlie Dent’s Pennsylvania district on their target list. A leader among moderate House Republicans, Dent announced his retirement last week, one day after a pro-Trump candidate announced plans to primary him, calling Dent the “ringleader” of opposition to the White House. Dent, who co-chairs the moderate Republican Tuesday Group, outran Trump in his district by 12 percentage points.

“Is the House at risk? Absolutely,” Dent admitted to the Times.