Friends with benefits: "The Mindy Project" and "Broad City" return

These shows illustrate how our TV companions carry us, and how hard we can be on them nevertheless 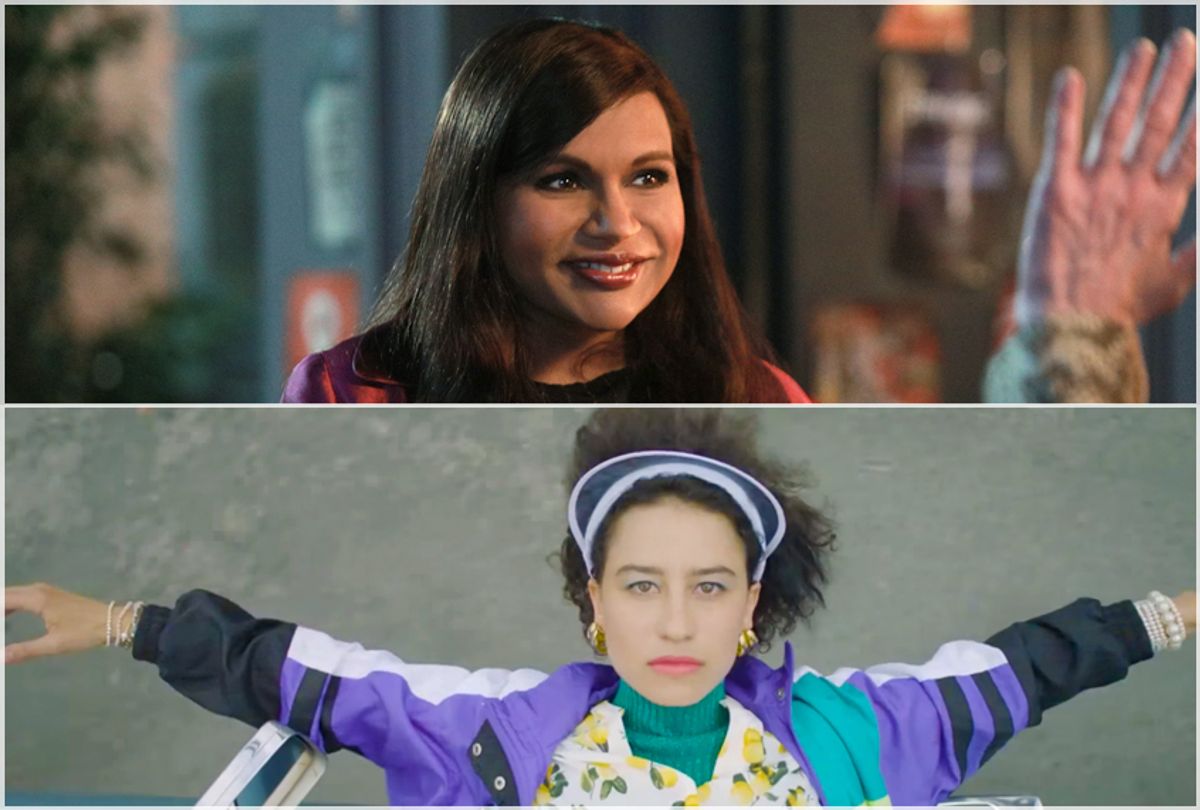 We put a lot of weight on our favorite TV comedies these days. Comedy is the companion keeping us sane, the one who answers our calls and helps us carry our heavy groceries to our fifth-floor walk-up. Comedy is such a great friend, in fact, that when she trips and breaks the eggs, we know we can snap at her and she’ll still pick up the phone the next time we need her. Comedy is reliable that way.

Tuesday’s premiere of the sixth and final season of “The Mindy Project” on Hulu and the anticipated return of “Broad City,” whose fourth season begins Wednesday at 10:30 p.m. on Comedy Central, marks the return of two such TV companions. Though to be honest, out of the two we tend to pick on “Mindy” a bit more than “Broad,” but not without good reason.

Both of them are reliable for a good time, but honest “Broad City” is our girl who blares her audacious, raunchiness and feminist pride in a way that makes everyone feel welcome at the party. Abbi Jacobson and Ilana Glazer are shameless, self-serving and messy AF while displaying a tender humanity and generosity lacking in the world around them. They probably won’t help you move but they’ll bring wine and weed later, and as Issa and Molly’s friendship on “Insecure” has shown us many times, that counts too.

Ilana and Abbi are team players on the power woman squad who love all the men in their lives and their phalluses. Abbi’s the more awkward of the two, and even she’s donned a strap on to peg her neighbor. She’s a giving sort, and we love her for it.

Against this, “The Mindy Project” and its six season-long homage to cinematic romance looks quaint by comparison. “Mindy” is legitimately funny, understand. We love having her around, especially in these later seasons on Hulu, where creator Mindy Kaling demonstrably shed a few of the inhibiting tethers Fox imposed upon her. In doing so “The Mindy Project” became more adventuresome in some respects while keeping other, ahem, network-friendly habits in place.

Anyway, its shift from Fox to Hulu “The Mindy Project” didn’t lose the heart of what made it special in the first place. And as it comes to a close with 10 final episodes it is still enormously charming and capable of generating the kind of shuddering laughter that makes a person accidentally snort. It does not judge.

And maybe Kaling’s heroine Mindy Lahiri, an Indian American obstetrician and gynecologist, doesn’t get enough credit for beating Ilana and Abbi to the punch with regard to deflating the culture’s tendency to paint romantic female leads as willowy, delicate pixie girls.

The New Yorkers of “The Mindy Project” in no way resemble the rampaging, dirty queens of “Broad City,” and that is intentional. The point of “The Mindy Project” is to cast Mindy Lahiri as the princess in her own version of a fairy tale. She is curt and sweet, self-deprecating, entitled and narcissistic, but also kind and generous.

Her quest has long been to realize the dream of a perfect wedding – maybe not the marriage, but as long as the cake and dress are spectacular, who cares? As the sixth season commences Mindy and her man Ben (Bryan Greenberg) begin to realize that maybe they care, and that the gulf between Mindy’s enticing dream of happily ever after and the workaday reality of sharing a life with someone is immeasurable.

Viewers are frequently reminded that Kaling is the first Indian American woman to create an American television series and serves as its showrunner.  This groundbreaking, a first. She’s even pointed that out at times, with a good bit of frustration, while addressing critiques of the way she and her writers place Mindy Lahiri at the center of a narrative structure typically framed by the white female viewpoint.

Kaling built “The Mindy Project” into an honestly funny satire of the unrealistic package of goods sold to women when it comes to romance. But even from the start, its cultural messaging is unsound. Despite populating her series with a cadre of complementary oppositional forces who have tremendous chemistry, the concept of inclusivity on “The Mindy Project” is mainly exercised in its female roles.

That is worth celebrating, to a point. The women on this show are as sexually vital as they are dangerous, crazy, stilted, pixieish and rough. Dr. Lahiri loves food and has no shame about body functions except when they break her plumbing — but that’s usually the fault of her friend and employee Morgan Tookers (Ike Barinholtz).

The main criticism of Kaling time and again is that Mindy’s lengthy trail of exes is noticeably white. Take her on again, off-again relationship for Chris Messina’s very Italian and Catholic Danny Castellano, with whom she parents a child. Messina has tremendous charisma, and the conflicted whirl of emotions he and Kaling’s Mindy create onscreen is one of the most attractive elements of the show (That is, aside from the bottomless well of lunacy Barinholtz draws upon to concoct new layers of weirdness for Morgan).

Danny is a man whose identity is more firmly established than the woman who loved and lost him, which is appropriate to the romance film formula that “The Mindy Project” follows. Even though Messina is no long a regular, his presence still looms large in Mindy Lahiri’s story; it’s all but guaranteed that they’ll be together again in one more form or another before the show ends.

But Messina’s Danny earns his place in Mindy’s life. Before and after Messina came a string of unremarkable men played by the likes of Bill Hader, Mark Duplass, Anders Holm, Seth Meyers and Timothy Olyphant. Those are just a few of the guys Mindy romances to some degree. Over six seasons her list of dates and partners, all of them white, has run into double digits.

Kaling is not alone in this; in “Master of None,” both of Aziz Ansari’s love interests have been white women. As the creators of their shows Ansari and Kaling get to choose whoever they want as their characters to fall in love with. If the objects of Mindy Lahiri’s affection resemble the heroes of the romantic films dearest to her heart — that is, upwardly mobile white male professionals — a person could say that’s true to the script (As a pediatric nurse Ben is a socioeconomic exception to Mindy’s rules of attraction, but he’s still white).

Again, expecting a show to be all things to all people is unfair and unreasonable. But it’s perfectly reasonable to point out that Kaling and Ansari make shows in a culture that is designed to entertain and delight white men. That phrase by the way, “designed to entertain and delight white men,” is taken straight out of a line of dialogue said by Kaling’s Mindy Lahiri in a provocative episode in which her character experiences a glorious couple of days in the skin of white guy played by Ryan Hansen.

Meaning, Kaling is aware of the structure in which she works and the bias that exists to keep most people of color from ever reaching her level of creative control and power. Rather than questioning white culture’s hegemonic dictating of what is attractive and who is worthy of love, Kaling instead makes her heroine and other women in “The Mindy Project” the centerpieces of that gaze, mostly without sparking exchanges that acknowledge the cultural differences.

And this is acutely noticeable in a season when shows such as “Insecure” and, yes, “Broad City” make a point of showing women dating and mating with a wide variety of people. Season 2 of “Insecure” dove deeply into the storyline of its heroine’s ex Lawrence (Jay Ellis) as he began to explore the possibilities that exist beyond his years-long span of monogamy. And in that short period of time Jay found love with a woman named Aparna — played by Jasmine Kaur, an actress of South Asian descent

“Insecure” creator Issa Rae is a woman of color, like Kaling, and she made a conscious choice to give equal weight to exploring the right to sexuality that her male characters have on this show. But it’s even simpler that that — Rae showed that these actors are skilled and available. So, too, are any number of Asian, Hispanic and Native American actors, all of whom could have been tremendous love interests who presence would not be out of place in New York City.

To Kaling’s credit, she clapped back at such critiques in a smart way. The season 4 episode “Bernardo & Anita” acknowledges the frustration and unfairness of being expected to adhere to prescribed notions of cultural identity on top of being true to one’s self. In it she brings her amiable if casually bigoted co-worker, Dr. Jody Kimball-Kinney (Garret Dillahunt), as her date to a dinner party where he’s the only white person. Jody inevitably makes a series of faux pas for which he isn’t mocked or judged any more than he is in any given episode. And he, too, ends up falling for Mindy.

Indeed, Dillahunt and Fortune Feimster are among the smartest additions to “The Mindy Project” because they so smartly personify the height of unapologetic white privilege — a sister and brother descended from wealthy Georgians who are proud of their family’s unsavory history of exploitation. But Jody’s proud chauvinism and lack of political correctness are his only distinctive qualities. Mainly he’s just . . . nearby and willing. Just like every other white guy in Mindy’s dating circle who isn’t Danny.

In fairness, “Broad City”’s Ilana would get off on seducing Jody Kimball-Kinney just for the kink of it. Her comically voracious sexuality is centerpiece of an upcoming episode of worth examining more fully closer to when it airs. Before that, the half-hour returns with a heartwarming opener modeled on “Sliding Doors,” skipping through the “what ifs” of the day Abbi and Ilana met for the first time. In many ways this pair isn’t much changed from that day. A couple of platonic bedfellows were already in their lives or fresh additions. Others we’ve already met, even if they haven’t emerged yet in this trip down memory lane.

But in this stylized one-off, “Broad City” remains sincere to the core ideals that make it so original, a vision that’s proudly female and pliable in its view of sensuality. The New York it celebrates is a wild cultural patchwork where Abbi and Ilana press flesh with people from all backgrounds and ethnicities. One of the series’ very first scenes shows Ilana riding her sex buddy Lincoln (played with deadpan perfection by Hannibal Buress). But their closeness is nothing in comparison to the intimacy and candor she shares with her roommate Jaime (Arturo Castro), who is in rare form in these new episodes.

This is sort of the friendly, soothing empowerment written into “Broad City,” a show that packs in all kinds of people for Ilana and Abbi to play with, and one that acknowledges the struggles, annoyances and nightmare fodder making life harder for everybody watching. Glazer and Jacobson made headlines by announcing the show is beeping out the president’s given name as if it were a curse word this season, providing viewers with one more harbor in an ocean filled with anxiety. They’d gladly carry that load of negativity for us, but do something better instead by suggesting that we’re better off denying it entry into our space, if only for a little while. Truer TV friends you will not find.

Besides, “Mindy” is more than capable of carrying the weight of our expectations, right?