Ousted White House genius vows to take down the Republican establishment. But his day is past, and he knows it 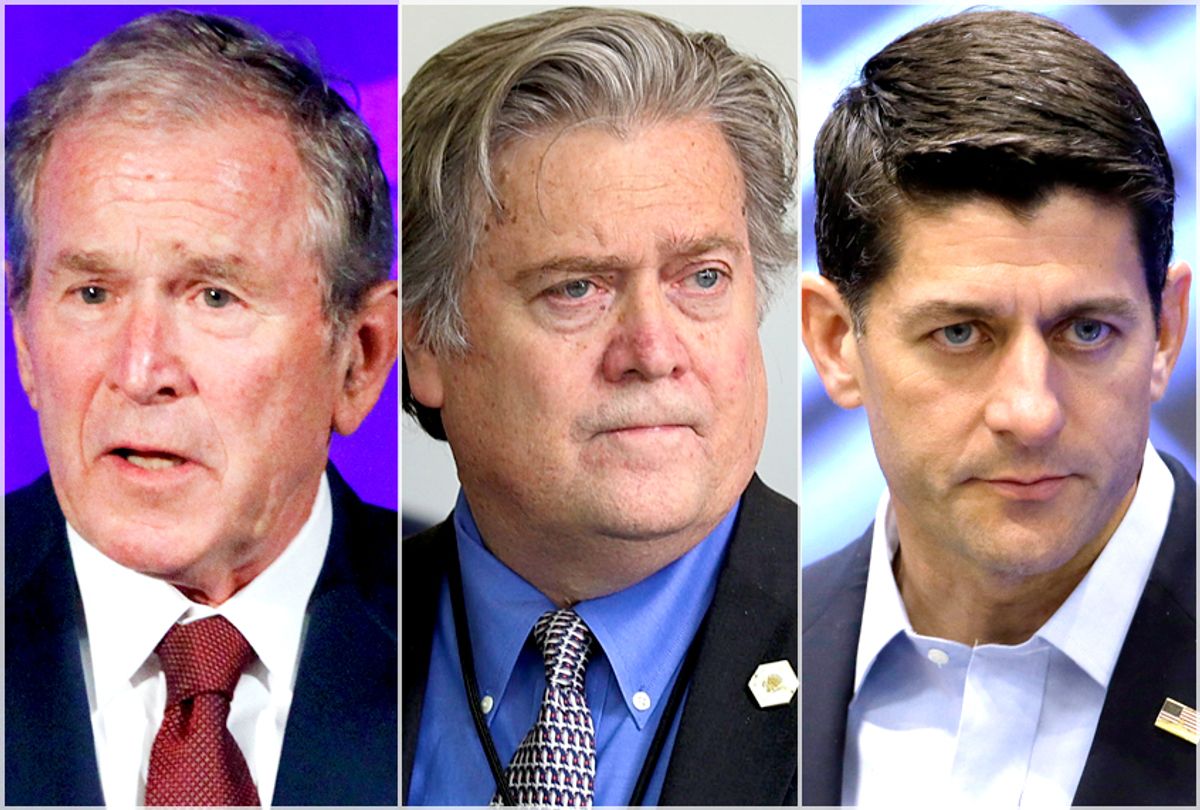 Steve Bannon went on "60 Minutes" last weekend and declared war. No, not on North Korea or ISIS or even the Democratic Party. He declared war on the Republican establishment. Democrats seemed to be strangely paralyzed by the man's audacity, and many Republicans looked as though they needed to shelter in place. It was quite a performance.

But I suspect Bannon was really only performing for one person, a man he knew would be watching and to whom he sought to prove his undying loyalty: Donald J. Trump. He was trying to keep the most powerful man in the world focused on what Bannon believes he had chosen Trump to do: Take down the GOP establishment from within.

You have to give the guy credit. He has never wavered in that objective from the earliest days of his fascination with Trump. He told Vanity Fair in the summer of 2016: "Trump is a 'blunt instrument for us, I don’t know whether he really gets it or not.'” The "us" to whom he refers? The white nationalist, neofascist movement he helped to popularize at Breitbart News, which he called the "platform for the alt-right."

Indeed, Bannon wore not one, but two button-down black shirts for that interview. Considering that some of his most important intellectual influences are fascists and white nationalists, that may just be his own personal tribute to the previous blackshirt movement he claims to have studied. One of his favorite philosophers, the fascistic Italian writer Julius Evola, thought Mussolini wasn't extreme enough.

According to Joshua Green, who wrote "Devil's Bargain," the recent book about Bannon, Trump and the 2016 election, Bannon claims to believe that the world is entering a very dark phase which was caused by the Enlightenment and can only be averted by adoption of a belief system called "primordial Traditionalism," one of the progenitors of fascism. Evola thought it was a pretty darned good system:

There are positive and valuable aspects. Those which I could value are the reconstruction of the authority of the state and the idea of overcoming class conflict toward a hierarchical and corporative formation, to some extent, of a military and disciplined style within the nation, in addition to some of their anti-bourgeois proposals. To me, all of that is positive.

[Bannon] is trying to not only take over American politics, but look at what he’s doing in places like the European Union. He’s trying to destroy what he would call these globalist edifices, which he believes [are] a manifestation of the rise of modernity and something that needs to be destroyed to pull us back to a pre-Enlightenment era.

Not that he's ambitious, mind you.

Bannon apparently thought he could make Trump his creature but found that Trump was far too narcissistic to allow anyone to have too much power over him. Bannon's main goal was to use Trump to take over the Republican Party and build power to blow up the existing world order and create a new nation of traditional, predominantly white citizens, working under the authority of a strong state determined to protect its people from foreign infiltration and cosmopolitan influence. Somebody tried that already. It didn't end well.

Trump may blow up the existing world order, but it's far more likely to be because of a catastrophic mistake than by fulfilling Bannon's visions. They are, after all, ridiculous.

Bannon didn't talk about any of that with Charlie Rose on "60 Minutes." He said that he is Donald Trump's wingman, loyal to the end. He promised to "help" Trump by taking on the GOP establishment on his behalf. He plans to use big bucks from his sugar daddy Robert Mercer, to finance primary challengers against uncooperative Republicans to show them who's boss.

This is not exactly a unique concept in modern Republican politics. Perhaps he hasn't heard of some even wealthier sugar daddies named Charles and David Koch, who similarly financed a bunch of primary challengers in 2010 and 2012 on behalf of a group calling itself the Tea Party. They had a handful of successes and they did manage to scare the GOP into compliance when they took out one of its leaders, former Rep. Eric Cantor of Virginia, along with a couple of old-school incumbents.

Of course, Team Koch also ran a whole slate of crackpots all over the country who lost seats they should have won when they said silly things like "legitimate rape" and "I am not a witch" and "we may have to use our Second Amendment remedies."  Overall, the project was a bit of a dud, and the Kochs have now backed away from electoral politics to some degree.

Bannon is in a much worse position than they were. First of all, there are very few moderates left in the party to pick off. And there seems to be an ever-lengthening list of GOP retirements. Perhaps all those seats will be won by Trump loyalists, but it's at least as likely that the Democrats will pick off many of them.

Back in 2010, Republican voters were thrilled to rally together to deliver a GOP House and Senate to thwart Barack Obama's agenda. Their hatred for him and the Affordable Care Act was a powerful motivator. If I had to guess right now, I'd say their love for Trump doesn't equal their hate for Obama. Recall that when Bannon backed a primary challenger against House Speaker Paul Ryan in 2016, he got around 15 percent of the vote in Ryan's exurban Wisconsin district -- in the midst of Trump fever.

Running in the primaries isn't easy. Taking on the party leadership is even harder. I'm not saying it's impossible. Trump was elected president, which proves that anything can happen in politics these days. But watching Bannon on "60 Minutes," one couldn't avoid the sense that he knows his moment has probably passed. For all his bluster and bombast about having more freedom now to pursue the president's agenda, being the White House senior strategist for seven months is as powerful as he will ever get. Bannon now looks and sounds like a man with his face pressed against the window, wishing he was back inside.

A month ago, Bannon was deeply involved in the most important decisions on the planet, and now he's back to pushing his apocalyptic vision on a website named after someone else. If he weren't such a malignant influence, I might even feel sorry for him. As it is, I'm relieved he no longer has a top security clearance. It makes me shudder knowing he ever did.