How will history view the Trump era? With contempt and amazement, for starters

Yes, Jefferson was a slave-owner and Teddy Roosevelt a blatant racist. Right now we're in no position to gloat 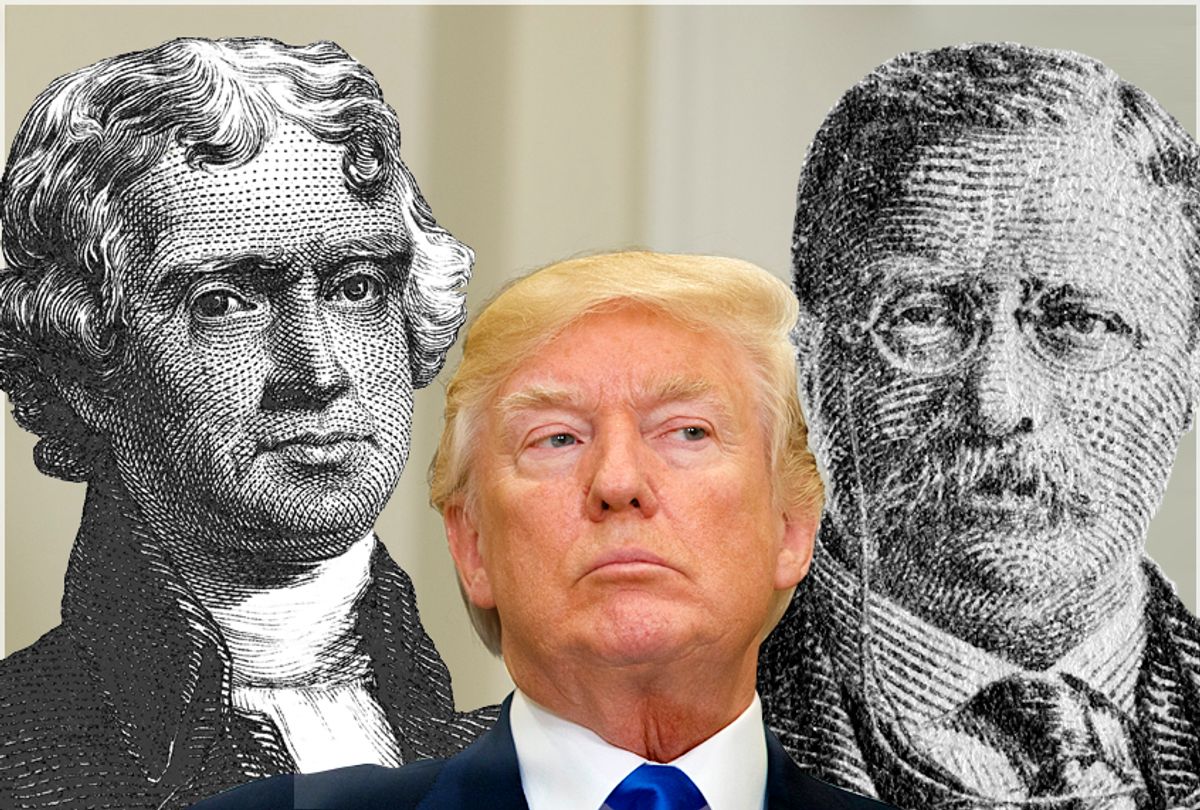 In his eloquent First Inaugural Address, Thomas Jefferson bathed in the glow of his young nation’s extraordinary promise. “Possessing a chosen country, with room enough for our descendants to the thousandth and thousandth generation,” the United States had nowhere to go but up. It would rely on an increase in public knowledge, “the diffusion of information,” to turn back “all abuses at the bar of the public reason.” Freedoms afforded by “the wisdom of our sages and blood of our heroes” would long serve as “the creed of our political faith, the text of civic instruction.” Should we lose faith, or forget right, “in moments of error or of alarm,” he assured, “let us hasten to retrace our steps and to regain the road which alone leads to peace, liberty, and safety.”

Jefferson always counted on the “diffusion of information.” Here’s what he didn’t see coming: What happens when it fails to lead to unprejudiced judgments? And what is the good of democracy if the voters are misinformed?

We do not wish to diminish Jefferson’s thoughts, any more than we should discard the eloquence of President John F. Kennedy in his bold American University address in the months after the Cuban Missile Crisis, when he prescribed peaceful coexistence with our Cold War enemies as “the necessary rational end of rational men”; when he acknowledged “genuine” world peace to be “the product of many nations, the sum of many acts . . . changing to meet the challenge of each new generation.”

Hope is who we want to be as a nation. The oratorical flourishes that underscore America’s traditional mission statement exist in the minds of honest patriots, because they encapsulate the essence of our national self-definition. Their inapplicability deeply embarrasses us whenever we come to recognize that we are not who and what we say we are.

The way we encounter our overly glorifying, hypocrisy-laden history has raised undue expectations. Life, liberty and the pursuit of happiness are in jeopardy at this historical juncture. We are, unquestionably, a melancholic nation in 2017. It’s not just the fate of undocumented immigrants, police shootings of innocent people of color or Confederate monuments and our collective failure to advance in the solution to put behind us the long legacy of racial bigotry and violence. We look back to our beginnings and scratch our heads, wondering how the educated men who gave voice to our most enlightened principles could have rationalized the ownership of other human beings. Original sin. Historical projection leads us to judge historical actors as though they knew in advance what the best of us deem to be civilized and just, presuming that they could have lived up to our values -- become us -- generations before we happened on the scene. But in doing so, we give ourselves too much credit for even our present, incomplete exhibition of civility and justice. Ergo, melancholy.

Because historical consciousness is so limited, and so quickly displaced, the capacity to rationalize is enormous. In 1860, as a most consequential national election loomed, a popular magazine that claimed to be an independent, nonjudgmental voice took up the question, “Should Women Vote?” It concluded that they should not -- because of their superior natural morality: “The intellectual structure of woman, with its wonderful and fascinating vivacity and delicacy, because of its very superiority in these respects, is less adapted to legislation and executive action in public affairs.” Standard thinking among the vast majority of public men.

Can you be too good to vote? Only when an excuse is needed to deny justice to millions on totally illogical grounds.

Theodore Roosevelt, who published books on U.S. history, was an ardent eugenicist, idealizing scientific methods of improving his race through the obligatory reduction in procreative activity by undesirable people -- and millions of fair-minded citizens concurred. Literacy tests and exclusion acts during this era enforced strict limits on Asian and African immigration. When Woodrow Wilson enthusiastically screened D.W. Griffith's film “Birth of a Nation” in the White House, he entertained the notion that the Ku Klux Klan served a positive role in saving white women from the libidinous rage of black men.

Speaking of blackness and rage, blackface entertainers were all the rage in Hollywood in the 1930s. Insensitivity. Women were banned from sitting on juries in some Southern states until the 1970s. Denial. In 1990, when Saddam Hussein brought about the first Gulf War, Americans were locked in debate over the question of female soldiers’ suitability for posting to a combat theater. Their weaker, presumably more susceptible bodies made it a bad idea, not to mention the unwholesome thoughts that their presence would put in the minds of male soldiers. Gay troops serving? You’re kidding, right? Legalizing gay marriage? Unnatural and downright antisocial. A threat to who we are as a people. Until it happens and we move on.

That is the reality of civil discourse in America. Besides wars of conquest, history is largely a repository of embarrassing ideas, tone-deaf majorities, selective memories. The mind is a forgetful, repressive thing, bent on recording a self-congratulatory history of its momentary self, whenever and however possible. The present is supposed to be the happy ending of the past. Or else, a conscious time, plausibly recommitted to an ambiguous past perfection. #MAGA

But even this does not tell us how we got into our present mess; how we got Donald Trump. You can be sure that our posterity will do that, in spades.

Let’s perform a useful exercise, and anticipate what a better world than ours will say about our political moment, say, 50 years into the future. We can only imagine:

Of course No. 5 never happened because, really, how could it?

“They were so smug, yet so misdirected,” says the future about us, generalizing as we do about preceding generations that allowed ill nature and moral turpitude to persist when they knew better.