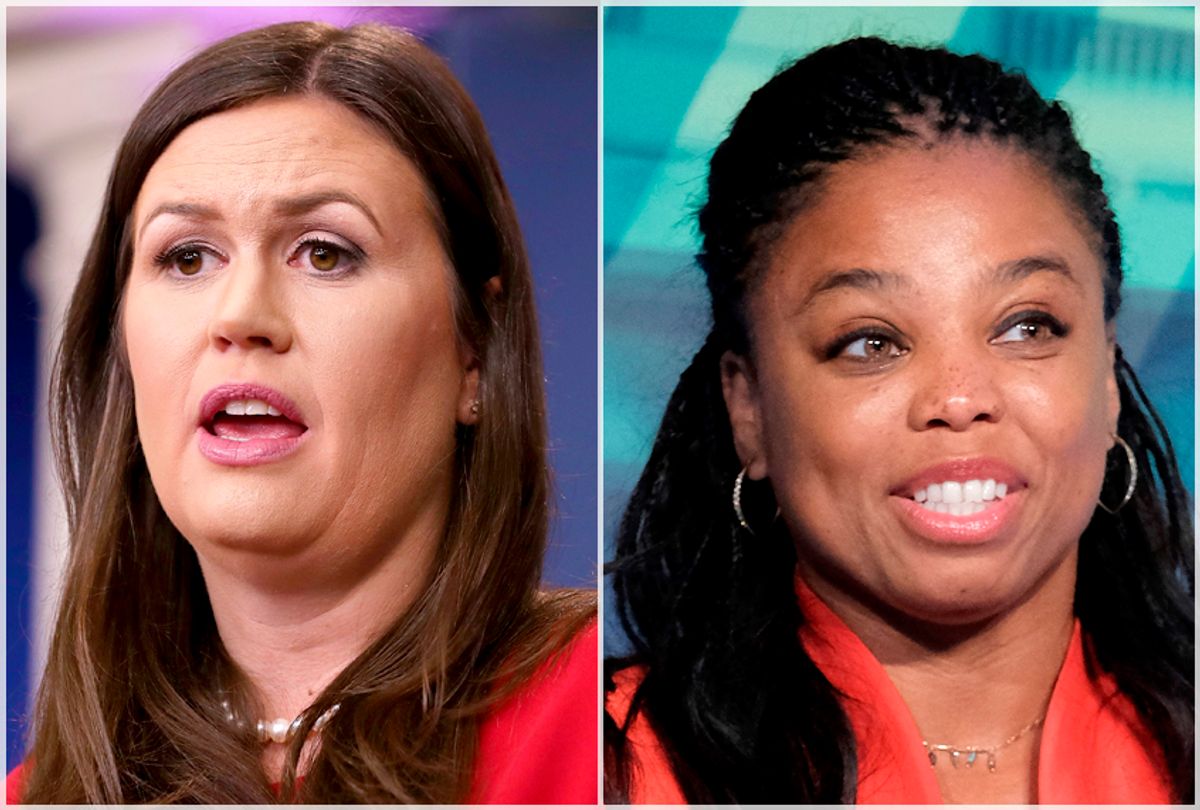 During an official press briefing Wednesday, White House Press Secretary Sarah Huckabee Sanders broadly suggested that ESPN had failed by not firing on-air personality Jemele Hill after the host tweeted criticisms of President Donald Trump in which she called him a “white supremacist” and “unqualified.”

When a reporter asked Sanders whether or not Trump knew about Hill's tweets, the secretary responded, "I'm not sure he's aware but I think that's one of the more outrageous comments that anyone could make and certainly something that I think is a fireable offense by ESPN."

While the secretary did not directly advocate that ESPN terminate Hill, she made it clear that she believes the host committed an offense that should have been met with such action. It is a rare — perhaps unprecedented — example of a sitting White House press secretary, the public voice of our country's executive branch, commenting on and judging the personnel decisions of a non-political, publicly traded media company in regards to a private citizen exercising her freedom of speech to criticize the president.

Note that Sanders admitted she was unsure whether Trump is aware of the situation or whether he, her employer, has an opinion on it. Rather, the spokesperson for the president interjected her own opinion regarding the first-amendment rights and the private employment status of someone who has no official affiliation with the government.

As joy Reid Put it:

Today, the White House press secretary used the people's podium to call for the firing of an individual citizen, @jemelehill. Take that in.

This is not the first time the secretary has wandered far out on a limb this week. Her comments on Hill firing come just one day after she voiced her opinion regarding former FBI Director James Comey at a Tuesday press briefing, in which she suggested that he should be investigated for leaking information in the weeks prior to his firing. "If there’s ever a moment where we feel somebody’s broken the law," she said, "particularly if they’re the head of the FBI, that’s certainly something that should be looked at."

Hill has already been admonished by her superiors. In response to Hill’s tweets, ESPN released a statement saying "The comments on Twitter from Jemele Hill regarding the president do not represent the position of ESPN,” the statement said. “We have addressed this with Jemele and she recognizes her actions were inappropriate." Conservatives say that Hill has received preferential treatment for not being fired and suggest that the network will lose ratings for its liberal bias. Liberals felt the response by ESPN was too harsh.