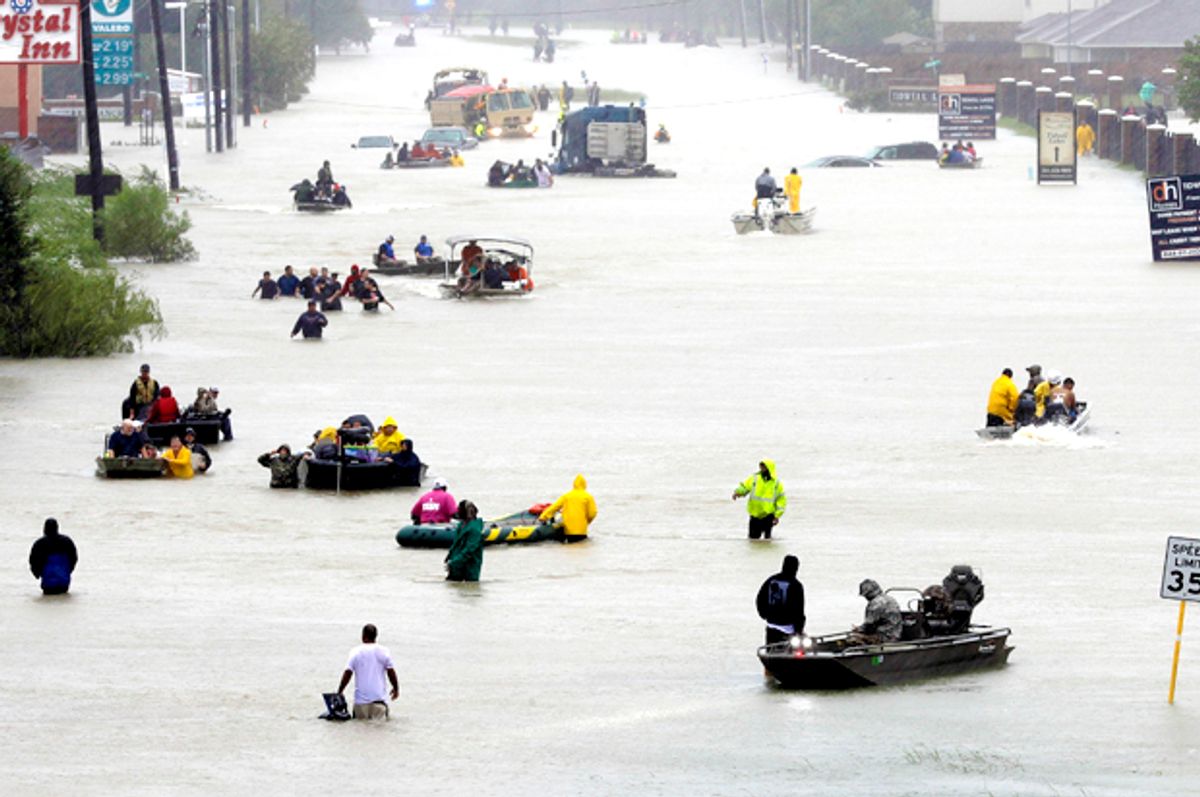 Back-to-back hurricane catastrophes have plunged the United States into a state of national crisis. We’ve already seen one worst-case scenario in Texas: For the moment, Hurricane Harvey stands as the most costly natural disaster in U.S. history. And now there’s Irma, which has wreaked havoc across the entirety of Florida, America’s most vulnerable state. In just two weeks, the U.S. could rack up hundreds of billions of dollars in losses.

Make no mistake: These storms weren’t natural. A warmer, more violent atmosphere — heated up by our collective desire to ignore the fact that we live on a planet where such devastation is possible — juiced Harvey and Irma’s destruction.

Houston and South Florida have long been considered two of our most vulnerable regions, carved out of swamps in some of the most storm-prone parts of the Earth. Now they lay, at least partially, in ruins.

Lurking behind the horrific scenes of water rising above rooftops along swollen Texas bayous and palm trees snapping in front of battered beachfront condos is this stark reality: Climate change doesn’t “cause” disasters like this, but it most certainly is making them worse.

It’s scary to watch this play out in real time. People’s lives and our landscapes are being altered. This is not a “new normal.” There is no more normal.

What are the most compelling facts on climate change & hurricanes you've seen recently? That fit in a tweet? cc: @EricHolthaus @KHayhoe

The effects of this new phase in our new climate reality reach far beyond the southeastern United States. Devastating floods across India, Nepal, Bangladesh, Sierra Leone, Niger, the Democratic Republic of Congo, and Nigeria in recent weeks collectively killed hundreds more than Harvey has and Irma likely will, combined.

A massive complex of wildfires is burning millions of acres across the North American West, with a smoke plume stretching coast-to-coast. On September 1, the day a petrochemical plant outside Houston exploded amid Harvey’s floodwaters, San Francisco recorded its warmest day in history — a blistering 106-degrees Fahrenheit — hotter than oft-scorching Tucson, Arizona.

Each of these events, individually, have a connection to the warming atmosphere. Collectively, they’re a klaxon siren that something is very, very wrong.

Of course, bad luck also played a role in the last two weeks. It’s hard to separate the two. Harvey, a Category 4 hurricane at landfall, oriented itself perfectly as it developed to maximize the rainmaking power of an overheated Gulf of Mexico.

Irma, one of the strongest hurricanes ever recorded on Earth, hopscotched through the Caribbean, making landfall on half a dozen islands at peak strength. And a third storm, Jose, also reached Category 4 strength, prompting a complete evacuation of the tiny Caribbean island of Barbuda — just four days after it was almost completely destroyed by Irma.

Some weather models now show Jose could make a loop in the middle of the Atlantic this week. If it heads back toward land, Florida is a possible destination.

So yeah, bad luck. But this is also the first time in history that the Atlantic has seen back-to-back-to-back hurricanes of Category 4 or higher. At one point on Friday, Irma and Jose both had estimated winds of 150 mph — strong enough to pulverize even well-built houses. Never before have two hurricanes of that strength existed simultaneously, much less assaulted the same piece of land.

There’s so much happening today in this view from NOAA’s new weather satellite, GOES-R. pic.twitter.com/31ZgmZ7I9l

We knew a time like this was coming. In the U.S. government’s recent Climate Science Special Report — painstakingly assembled by 13 federal agencies from the work of thousands of scientists around the world and then leaked to the New York Times for fear of censorship by the Trump Administration — the authors were clear:

Hurricanes, especially the strongest ones, are going to get worse in the future.

With each year that passes, we’re locking in an extension of this horrific, tragic moment in human history — a time period between when the effects of climate change become blindingly obvious and when we actually do something meaningful about it. Scientists have warned us for decades about worsening weather. But many of our leaders fail to act.

In his 2009 memoir, climate scientist James Hansen warned of the “storms of my grandchildren.” Turns out, he was still alive to see them. Climate writer Alex Steffen calls this new era, which feels outside the realm of normal existence, a “xenotopia,” or strange world.

Every day, British naturalist writer Robert MacFarlane uses his Twitter account to define a new word that relates to our new reality. (Friday’s was “caochan” — “a stream so slender or overgrown it can scarcely be seen.”) Today we are already mourning a destruction that has yet to happen — a phenomenon the Australian environmental philosopher Glenn Albrecht calls “solastalgia.”

There’s evidence that extreme weather, no matter the magnitude, won’t change our politics anytime soon. Predictably and understandably, Texans and Floridians are already focused on rebuilding. But missing from the conversation right now is a frank discussion about the near future.

Destructive storms like Harvey and Irma will only become more common. Accepting that fact — and talking about the radical change necessary to reverse this trend — is the most important thing we can do right now.

Those conversations could alter the way we build our cities, so we put fewer people in harm’s way. They could begin to force our government to rethink its habit of subsidizing the corporations and industries that got us into this mess.

We’re not talking about far-flung creatures and concepts like polar bears and melting ice caps anymore. We’re talking about the destruction of lives and places where many of us live or have visited.

At times like these, politicians like to talk about the American ability to come back stronger than ever. What if, this time, we considered planning ahead so we don’t need to come back at all?