Why "South Park" is perfectly armed to fight the alt-right 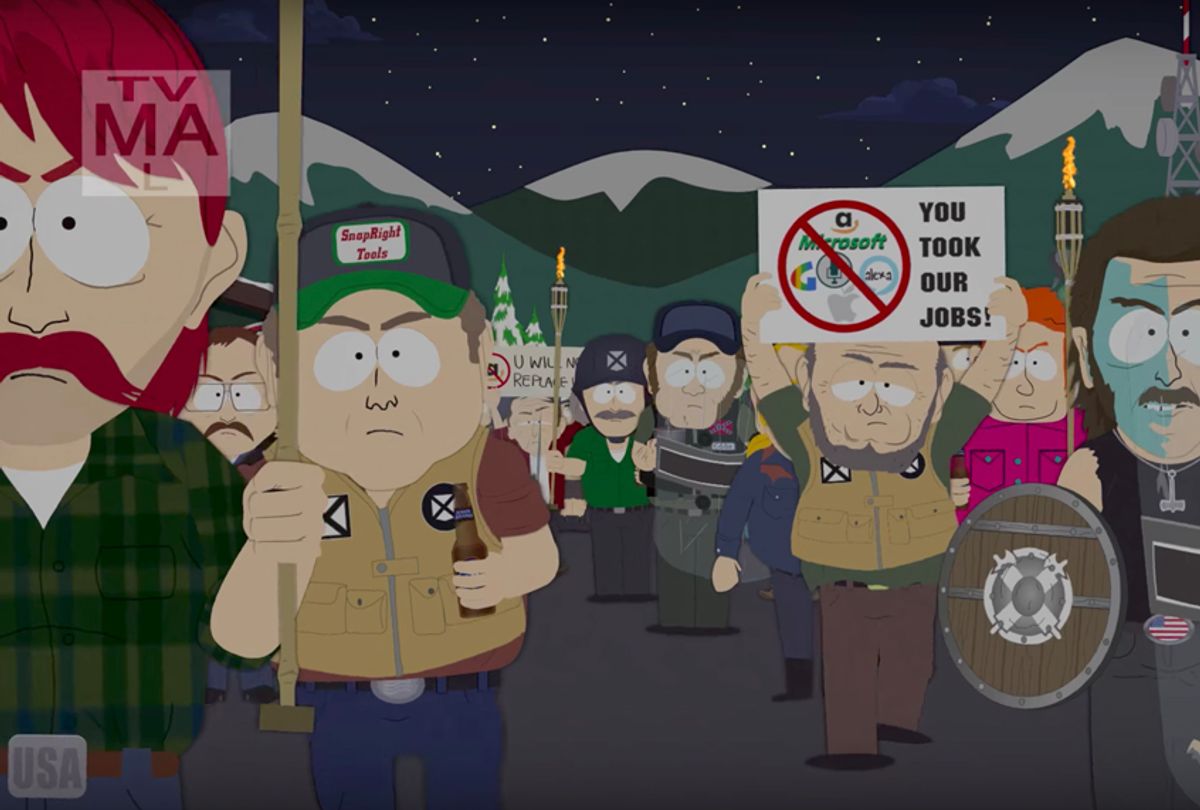 "South Park" creators Trey Parker and Matt Stone are harboring a dirty secret: Much of their audience, the 18- to 34-year-old demographic, overlaps with a certain young, male, white slice of President Donald Trump's base. You know, the ones who troll liberals online and proudly rock MAGA hats in public.

It is perhaps the reality of this ugly Venn diagram that led Parker and Stone to announce that "South Park's" 21st season, which debuted last Wednesday on Comedy Central, would avoid satirizing the president. In an interview with Bill Simmons, the cartoonists claimed that they had grown tired of mocking Trump, whom they compared to a monkey "running himself into the wall over and over."

While Trump has been low-hanging fruit for comedians, a particularly nasty segment of the president's base is no laughing matter. Known as the alt-right, these online trolls get a kick out of transgressing liberal sensibilities. They not only dabble in sexism and anti-Semitism; they have built an aesthetic based on white supremacy and claims of reverse racism. Founded and subsequently nurtured on 4chan and other anonymous online communities, the alt-right gleefully breaks modern-day taboos as a form of protest against normative ideals.

It is this counterculture that can often be found in "South Park" — especially in the earlier seasons. "South Park" created a cult following through an unabashed, irreverent humor that spared nothing and no one. Indeed, the show has even been labeled "racist" for its abuse of ethnic stereotypes. Hell, one of its few black characters is named Token.

The alt-right revels in what they see as an unapologetic contempt for all that others deem holy. In truth, the creators are far more nuanced and progressive than most give them credit for. Token, for instance, amplifies the fact that, yep, TV shows employ token, often one-dimensional characters of color in a practice that is often more a disservice to underrepresented groups than a benefit to them. Still, parker and Stone cannot deny that "South Park" has fans in the some of the darkest, most hateful corners of the internet.

When the duo said it would no longer parody Trump on their show, The_Donald subreddit, an online basket for the president's "deplorables," rejoiced over the news. "Fuck yea. Finally looking forward to a new season of South Park," one Reddit user said. "Its only fun when the snowflakes get bashed [sic]," another user chimed in. "THEY LIVE! Matt Stone and Trey Parker are COMING BACK TO REALITY!," an enthusiastic redditor proclaimed.

While this decision appeased Trump's base, Parker and Stone absolutely did not preclude them from the scope of their ridicule.

In the season premiere on Wednesday, Parker and Stone set their sights on a big sector of Trump fans — the kind of white, blue-collar voters who blame everyone but themselves for their economic status. The episode, which Deadline called a "subtle takedown of white supremacists," had two narratives: the town's Confederate flag-waving rednecks protesting Amazon's Alexa for taking their jobs, and Randy's feud with the protestors for disrupting the set of his HGTV-inspired TV show, "White People Renovating Houses."

Randy concocts a plan to replace all Alexas in town with the aggrieved white nationalists, thereby ending the Confederate-themed demonstrations. When one of the protestors refuses, calling the labor demeaning, Randy fumes, "Sorry you didn’t go to college so you have to take the jobs you can get. Coal mining and truck driving are not exactly jobs of the future. You're stuck in another time." The protestor runs off, yelling, "Muslims trying to kill us, black people rioting, Mexicans having babies – I say, ‘Kill ’em all!'"

The political satire was admittedly muddled, but it succeeded in crystallizing the absurdity of white, blue-collar entitlement. The target of the premiere was older Americans, those who have seen the new economy pass them by. Yet "South Park" has an unusual opportunity in future episodes to use its comedy to enlighten young, disenchanted white men who have embraced the alt-right ideology.

Parker and Stone did not create "South Park" to push a political agenda. The self-described libertarians are in it for the jokes. They also likely despise liberals as much as these new-age conservatives — a healthy, fair position. But because "South Park" spares nobody its scorn, Parker and Stone can — and perhaps should — do the country a solid and employ the alt-right's tactless humor against them. As a Trojan horse, "South Park" can finally demonstrate to members of the alt-right just how pathetic and ultimately self-destructive their dead-end worldview is. They're watching, after all.

Although the alt-right frequently bemoans the liberal bubble, they are just as guilty of confining themselves to their favorite channels. "South Park" has been a safe space for the alt-right since its inception. It would be only appropriate if the show turned around and devoured its own viewers.