Altitude sickness in the upwardly mobile

After a childhood of watching my single mom struggle to support us, I didn't know how to be a middle-class adult 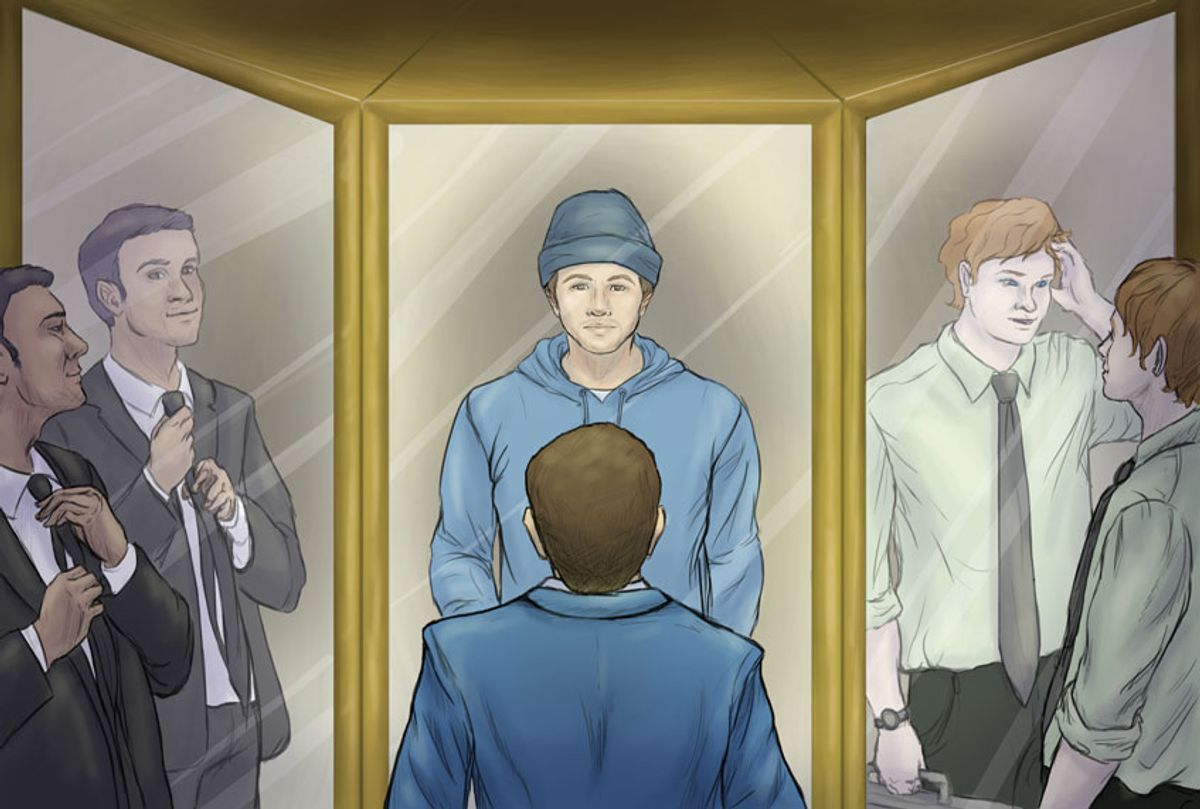 On the way back from our trip to Laura Ingalls Wilder’s homestead in the Missouri Ozarks, my mother and I pit-stopped in a McDonald’s parking lot after the drive-thru attendant told us the restaurant didn’t accept checks. We were returning to our own home in the Arkansas Delta so broke that Mom ran her arm, up to her elbow, beneath the seats of her Grand Am, fishing for enough change to buy a single cheeseburger. The souvenirs she’d splurged on in the days before — a boxed set of Wilder’s "Little House" series and a t-shirt for me and two framed sepia photos of me in period Western wear, including one for my father, whom Mom had recently divorced — sprawled across the back seat, and I slumped in the passenger seat, heading my bounty, incapacitated with a migraine.

“Maybe you just need to eat something,” Mom had said, and so she finally gathered 72 cents, and, as often was her way in those days, she went hungry. I ate, and then miles down Highway 63, as often was my way in that debilitated state, I puked.

Like most who lived in Walnut Ridge, a tiny manufacturing town moated in summers by the waters of rice fields, we lived paycheck to paycheck, Mom burdening herself with mounting credit card debt in private so that she could drive new, or nearly new, Pontiacs or Oldsmobiles and I could wear Duck Head and Guess clothes in public. The daughter of sharecroppers, Mom had grown up in a tin-roofed shack with an outhouse and started picking cotton before she’d even enrolled in school, her burlap pick sack twice as long as her body. Her youth had been composed almost entirely of the homemade and hand-me-downs, so old-fashioned things had no appeal to her as an adult. Having once been a have-not, it was essential to her for us to be clear members of the haves — even if only by appearance — no matter the cost.

While I read about explorers and pioneers, Mom, though I didn’t yet realize it, was herself exploring and pioneering: divorcing Dad because, unlike him, she wanted more than farm life had to offer. In turn she faced a backlash from our rural fundamentalist community, becoming the first of her siblings to leave farmland when she moved us 15 miles away to Walnut Ridge, where she worked as a secretary at a vacuum cleaner and Ginsu knife factory. Then, tired of the scorn she continued to meet because of her divorce, she movd us to Jonesboro, a larger university town 40 miles away, which made us some of the only people in the known history of our family to leave Lawrence County. Unlike the Ingalls, we never traversed any frozen lakes or fought any prairie fires, but in transporting us from the place she never felt she belonged, Mom charted what was for us unknown and sometimes hostile territory.

Following her model of grit and gamble, I pioneered myself, becoming the first in our family to finish college when I graduated from the so-called Harvard of the South, then the first to go to graduate school when I entered the university founded by Thomas Jefferson, both of which I attended on fellowships, scholarships and financial aid.

After nearly two decades of plodding, however, it wasn’t just me who’d become upwardly mobile, lecturing at a university in Nashville whose yearly tuition, room and board more than quadrupled Mom’s former salary as a secretary. By then Mom had elevated to an even higher station than me, having married a generous, adventurous businessman — the love of her life — whose partnership made it possible for her to retire early from a job at Frito-Lay she hated in order to find leisure work she enjoyed. Of all things, she started refurbishing and selling antique furniture — as though the ability to now have more or less any new thing she wanted without worry had given her a fresh eye for the old.

This was a twist I’d hardly expected. I always thought I’d leave Mom behind in the financial mire, at least for a time, by necessity. But although at first it seemed we were now both miraculously on the same ascending trajectory, in time I found our paths diverging in another way.

I remembered the role Mom’s anxiety over bills, her working second and third jobs, much of it for my sake, had played in her depressions — the nights of total speechlessness, the weekends when I’d visit Dad and she’d pull all the shades as soon as I left on Friday and not emerge from bed until I returned on Sunday. Now dealing with bouts of depression myself, I led a spartan lifestyle, both as a means of protecting myself from the possibility of paralyzing debt and as a sort of penance for having been so indulged at Mom’s financial and emotional expense as a child.

“Living in a furnished apartment, owning nothing of my own,” I told people with pride, “it leaves my mind uncluttered. It helps me think.”

Moreover, buying much of anything extraneous, driving anything except an economy car, seemed like a betrayal to my identity. The sight of Mom driving a Cadillac she afforded with ease — not a Pontiac she strained to make the payment on — seemed like an erasure of our history.

I fought with her and my stepdad Jim the Christmas they bought me a MacBook I didn’t need. I refused it for a week. When Jim installed an Apple AirPort as a surprise for better internet connectivity in my apartment, I demanded he take it down. When they left me with a flat-screen TV to replace the boulder of a tube TV that came with my furnished apartment, I developed a nervous rash that circled my neck and extended down my chest like a tribal collar.

Like them, I loved giving gifts — I self-describe as a caretaker by nature — but for me, accepting a gift, whether in the form of an object or a favor, was now nearly unbearable. Furthermore, I saw Mom and Jim’s pushing their gifts onto me against my wishes as a violation of my boundaries. While I struggled to make them acknowledge and respect that, I struggled, too — because of the tension my boundaries created — to understand the perseverance of their generosity.

Their doggedness reminded me of the "Little House" chapter in which Mr. Edwards saves Christmas for Laura and Mary by risking his life to deliver their presents from Santa Claus through a blizzard, each girl thrilled with simply a new tin cup, a small cake, a stick of candy, and a shiny penny. It occurred to me then that Mom’s childhood Christmas hauls probably looked far more like an Ingalls girl’s than even the smallest of mine.

But no, her Christmases weren’t that spare, she corrected me when I brought it up on a Wednesday or Sunday night, the habitual nights of our phone calls. She told me about the transistor radio she picked out from the Spiegel catalog for Christmas when she was in seventh grade.

“I remember seeing the color of it on the page, a pretty teal,” she said of the radio, which was the cheapest in the catalog. She knew her family’s limitations, and so she was careful never to choose a more expensive brand of anything. “But when I got it, it would only play local stations — gospel and country. I didn’t have sense enough to know that because it was cheap, even if it was pretty, it wouldn’t pick up anyplace that played the Beach Boys or the Four Seasons or Ricky Nelson, like WLS out of Chicago.”

Her inability to receive those signals from far-flung stations — to directly connect with the larger, more modern world — was what made her most feel the difference between herself and some of the other girls at school, the girls with more expensive, higher-powered radios. That mere fact of possibility.

I came to see that this — this connectivity, this possibility — was what Mom had wanted to ensure I was equipped with throughout my childhood, at all costs. What Mom and Jim both wanted, with their perpetual presents, was to make sure I still had it, even as an adult. So to reject a gift was perhaps to reject an attempt at connection. And to receive one was, for me, an act of vulnerability, and my inability to do so had been a barrier in the deepening of all my relationships. Romantically, for instance, I had pursued emotionally unavailable men, confident that they would never have anything significant to offer me. I could do all the giving.

Doing all the giving and care-taking had been a charitable means of control for me. In this lopsided way, I could harbor myself in certainty, even if it was the certainty of continued scarcity.

I had successfully protected myself, I had secured all my boundaries, but in the process, had I also prevented myself from venturing toward the possibility of abundance? Had I deprived myself of the ability to grow?

To explore this, I tried something radical: Starting with Mom and Jim, I worked through my discomfort and made a habit of simply saying “yes.” When they delivered electronics I hadn’t asked for, and possibly didn’t even know how to operate, I only said “thank you” — though I said it repeatedly. When Jim began hiding a $100 bill somewhere in my apartment for me to find after they visited — under my pillow, under my MacBook, under my electric teakettle, under the Kleenex box on the tank of my toilet — without caveat, I texted him my appreciation, accompanied by a procession of grateful-meaning emojis (dollar sign, double exclamation mark, palpitating heart, praising hands, praising hands, praising hands).

To trust I was worthy of these offerings, these potential sacrifices, remained an extraordinary effort, but I could see that to allow Mom and Jim to do their best as they perceived it, especially now that Mom could afford to do so, to let her take care of me even if I didn’t need it, was a kindness of my own. And so the following summer I traveled to England and Ireland with them — my first trip to Europe, and by then Mom’s fifth — for an all-expenses-paid vacation I agreed to without visible hesitation.

While we rode the London Eye, the giant Ferris wheel of transparent, futuristic, 50-passenger pods overlooking the city , I gazed from Buckingham Palace to Big Ben to Westminster Abbey and I thought of Mom in that McDonald’s parking lot in the Ozarks, raking beneath her car seats for pennies.

“Did you ever think you’d be here?” I asked her as the Eye elevated us at a crawl to ever-grander views along the glittering Thames.

By now I’d begun to understand that when I’d pledged allegiance to austerity, I’d been desperate for control, by any means necessary, in large part because I lived in a system that for a lot of people — people like those in the farmland I’m from — offers little of it. Our fates aren’t just determined by hard work and perseverance and thriftiness, as Pa and Ma Ingalls espoused, but also, and possibly even more so, by the freak chance of when and where and to whom we’re born, and who we meet along the way of our lives. And while some of us may elevate our stations, only the tenuousness of a job or partnership often stands between us and a plummeting fall.

“But most of all,” Mom said, our latest-model iPhones crisply connecting us between Jonesboro and Nashville, “most of all I feel free.”

Justin Quarry teaches English and creative writing at Vanderbilt University and is working on a novel and collection of essays. You can find him at www.justinquarry.com and @justinquarry on Instagram.