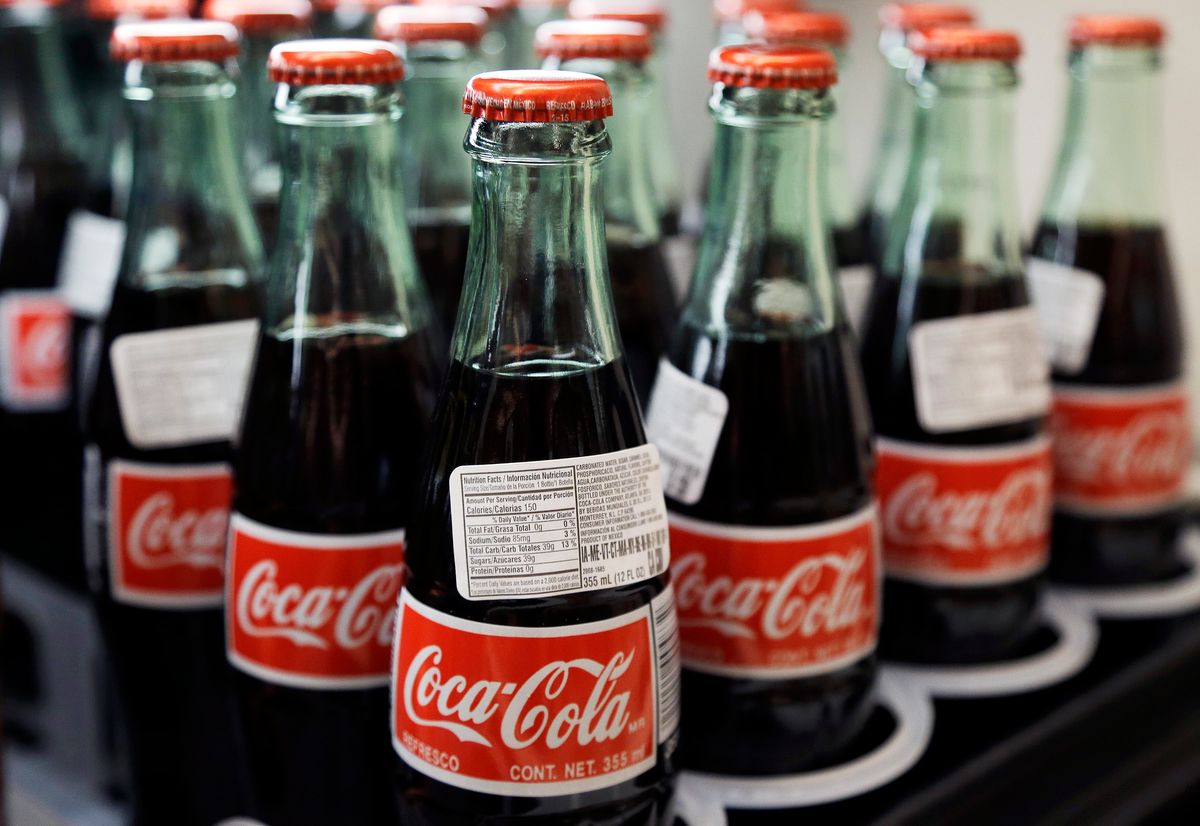 "In the past four years, our wells have started drying up," says Juan Urbano, who just finished a three-year term this February as the president of the Communal Territory of San Felipe Ecatepec. "People sometimes walk two hours a day to get water. Others have to buy their water."

Where is all the water going?

In between San Felipe and San Cristobal lies a Coca-Cola bottling plant, operated by the Mexican company FEMSA. The plant consumed over 1.08 million liters of water per day in 2016.

Urbano, 57, explains that the urban growth of San Cristobal has gradually eaten up agricultural lands in San Felipe. He is part of a shrinking number of people in the community that still grow corn, beans and squash on plots of land passed down for generations, and drink pozol, a drink made from fermented corn dough.

San Felipe Ecatepec is one of thousands of towns across Mexico where corporate water consumption has taken precedence over local need. Advocates are scrambling to rein in a chain of public health consequences.

Government is failing on constitutional right

Chiapas has the highest renewable water resources per capita in all of Mexico. Yet, the tap water here is rarely safe to drink. And in rural Chiapas, more than one in three people do not have running water. Urbano describes how families in San Felipe frequently get sick from drinking contaminated well water.

"We have been asking the government to install a deep well in the community for 12 years," says Urbano. "We've gone to the municipal, state and federal governments, but they've done nothing."

Article 115 of the Mexican Constitution requires all municipal governments to provide potable water, suitable for drinking and bathing, along with drainage, sewage and wastewater treatment systems. Despite the government's responsibility, most Mexicans do not have safe drinking water in their homes. Each Mexican household buys on average 1,500 liters of bottled water a year.

Antonino García, an agronomist and researcher at Chapingo University's San Cristobal campus, says that the water problem in San Cristobal has historic roots.

"The city has been growing significantly since the 1970s," he says in an interview at his office, which has a view of Huitepec mountain, where Coca-Cola extracts its water. "But in San Cristobal, there was no urban planning. And that's been aggravated by public policies that don't pay attention to the Indigenous people of the state."

Looking at San Cristobal's geography, its haphazard organization becomes obvious. As the valley floor has filled with homes, new neighborhoods slowly have climbed up the surrounding hillsides. García explains that groundwater is no longer enough to feed the city, and that Huitepec is the watershed's most important subterranean supply.

Salmonella is now an endemic problem in San Cristobal. A study at the research university ECOSUR found that water in the local wetlands has high levels of bacterial pathogens, including coliforms, which make it unsafe for consumption.

García says the water shortages and contamination are becoming worse with climate change. The rainy season, which lasts from May to October, is not as consistent as in the past. San Felipe isn't the only community where wells are running dry. Urbano says other communities near the Coca-Cola plant, such as Los Alcanfores, are also suffering water shortages. Community leaders in the town of Teopisca, 20 miles east of San Cristobal, reached out to García when their wells dried up this year.

On the night of September 7, an 8.2 magnitude earthquake hit off the coast of Chiapas. Over 90 people were killed in Chiapas, Oaxaca and Tabasco. While San Cristobal was not one of the hardest-hit cities, three people died in informal neighborhoods in the north of the city. The impacts of the earthquake on water infrastructure are still being assessed.

García says numerous pipes broke, interrupting water access. "Surely the earthquake damaged underground caves in the aquifer, which could impact aquifer recharge in the future," says García. "But a study to assess that type of damage would be very costly, and we just don't have the information right now."

Coca-Cola in the highlands of Chiapas

While local communities struggle to secure water, for Coca-Cola, there is no shortage of water. The bottling plant opened in 1994, the same year the Zapatista uprising put Chiapas in the global spotlight. While the Zapatistas organized in the mountains surrounding San Cristobal, FEMSA began pumping water from Huitepec mountain. The National Water Commission (Conagua) renewed the permit in 2005, and FEMSA now operates two wells.

In Mexico, lax government regulation, fueled by the revolving door between government and industry, helped FEMSA become Coca-Cola's most important bottler worldwide. Vicente Fox was president of Coca-Cola FEMSA Mexico before being elected Mexican president in 2000.

FEMSA reports that it uses 56.9 billion liters of water a year in its operations across Latin America. In Mexico, the company holds 40 water permits.

Civil society organizations published the Report on Violations of Human Right to Drinking Water and Sanitation in Mexico, this year, which called out Coca-Cola, PepsiCo and Danone for profiting off Mexico's water resources without paying fairly. The report states that the water fees the companies pay "are completely ridiculous compared to the profits that these companies make off the water." They report that FEMSA pays 2,600 pesos ($146 USD) for each of its water permits in Mexico.

FEMSA funds reforestation and rain water catchment projects, which the company says "replenish" the same amount of water that is used in Coca-Cola production. A FEMSA representative in Mexico City told Truthout that the reforestation program in Chiapas has planted more than 129,000 trees.

However, water catchment and reforestation in other parts of the state have not brought back the well water in San Felipe Ecatepec. García sees a direct link between the deep wells of the bottling plant, and the nearby water shortages.

"Imagine each well is a straw going down into the earth. If the Coca-Cola straw is much longer than the straws the communities have, their wells will eventually run out," he says. Juan Urbano says the deepest wells in San Felipe are around 25 meters. FEMSA's wells are 130 meters deep.

Urbano says that FEMSA representatives have never reached out to his community to address the water problem.

A FEMSA representative told Truthout that the San Cristobal bottling plant produces between 5 percent and 7 percent of the Coke products consumed in Mexico. The company declined to specify how much it pays for the water extracted in San Cristobal.

The Chiapas branch of Conagua confirmed to Truthout that the company has permits for two wells to extract a total of 499,918 cubic meters of water per year, or 499.9 million liters. In 2016, the company extracted 78.8 percent of the permitted total.

The water situation in Chiapas has attracted international attention. Léo Heller, the UN Special Rapporteur on the Human Right to Safe Drinking Water and Sanitation, visited Chiapas this year. In a press conference on May 12, he said he collected sufficient evidence to prove that Mexico is violating the human right to water and sanitation.

The civil society Report on Violations of Human Right to Drinking Water and Sanitation in Mexico includes dozens of case studies to prove how corporate water use is prioritized over the human right to water. The report also shows how the poorest Mexicans have the least access to water and sanitation services.

Beyond Coca-Cola's insatiable thirst for Mexican groundwater, advocates have called out the company's role in the country's health crisis.

During decades working in Chiapas as a doctor, Marcos Arana found that water access issues were at the heart of public health problems in the state's Indigenous communities. "If communities had access to clean water, many health issues in Chiapas would improve," he tells Truthout.

"In many cases, children with malnutrition have access to food. But due to dirty water, they develop gastrointestinal problems and cannot eat properly or absorb nutrients," he says, echoing what Juan Urbano described in San Felipe Ecatepec. He also saw that soda was replacing traditional beverages like pozol, and in some communities, soda was even cheaper than water.

Meanwhile, public health organizations, such as El Poder del Consumidor (Consumer Power), based in Mexico City, have argued that soda consumption was contributing to Mexico's soaring diabetes and obesity rates. According to the 2012 National Health and Nutrition survey, diabetes is the leading cause of death in Mexico and affects 13 million people. Another study found that one in six diabetes cases could be directly linked to soda consumption.

In response, advocates like El Poder del Consumidor and Arana campaigned for a soda tax in Mexico. They succeeded against the odds, and it went into effect in January 2014. While the tax is lower than advocates had recommended, it equals 10 percent the cost of the beverage, or roughly one peso per liter.

After the tax was enacted, soda sales fell by 5.5 percent in 2014 and 9.7 percent in 2015. Following Mexico's lead, US cities, such as Philadelphia and San Francisco, have passed similar measures.

"The tax alone won't solve the problem," Espinosa says. "The long-term strategy is to increase access to safe drinking water and drinking fountains."

The federal government reports that funds from the tax have been used to install 11,000 water fountains in schools. Advocates are pushing for the remaining funds to be used for health programs for low-income communities that the price increase hits hardest.

Espinosa points out that in some cases, companies are not passing the tax along to the consumer. A study published in 2016 found that in rural Mexico, soda prices only went up 0.73 pesos per liter, instead of the full 1 peso required by law. This finding suggests that in places like rural Chiapas, soda companies could be subsidizing the cost of the tax to keep prices low.

The long-term impacts of the tax remain to be seen, but a study predicted that during the next decades, the reduction in soda consumption will prevent between 86,000 and 189,000 cases of diabetes.

While public health arguments have kept Coca-Cola on the defensive in Mexico's Congress, the company's unlimited refills of Chiapas groundwater are also facing local opposition.

Arana says that ongoing citizen pressure is working. Coca-Cola previously had billboards in Indigenous communities around San Cristobal, such as San Juan Chamula, showing men and women in traditional dress with Coca-Cola bottles. They have now taken down the billboards.

"They're changing their strategy," says Arana. "They're worried about all the criticisms."

In San Felipe Ecatepec, Juan Urbano doubts the current Mexican government will help the community with its water problems. Instead, community leaders are taking part in the National Indigenous Congress (CNI), affiliated with the Zapatistas, to highlight Indigenous concerns during next year's presidential elections.