It was the poorest communities that bore the worst of it 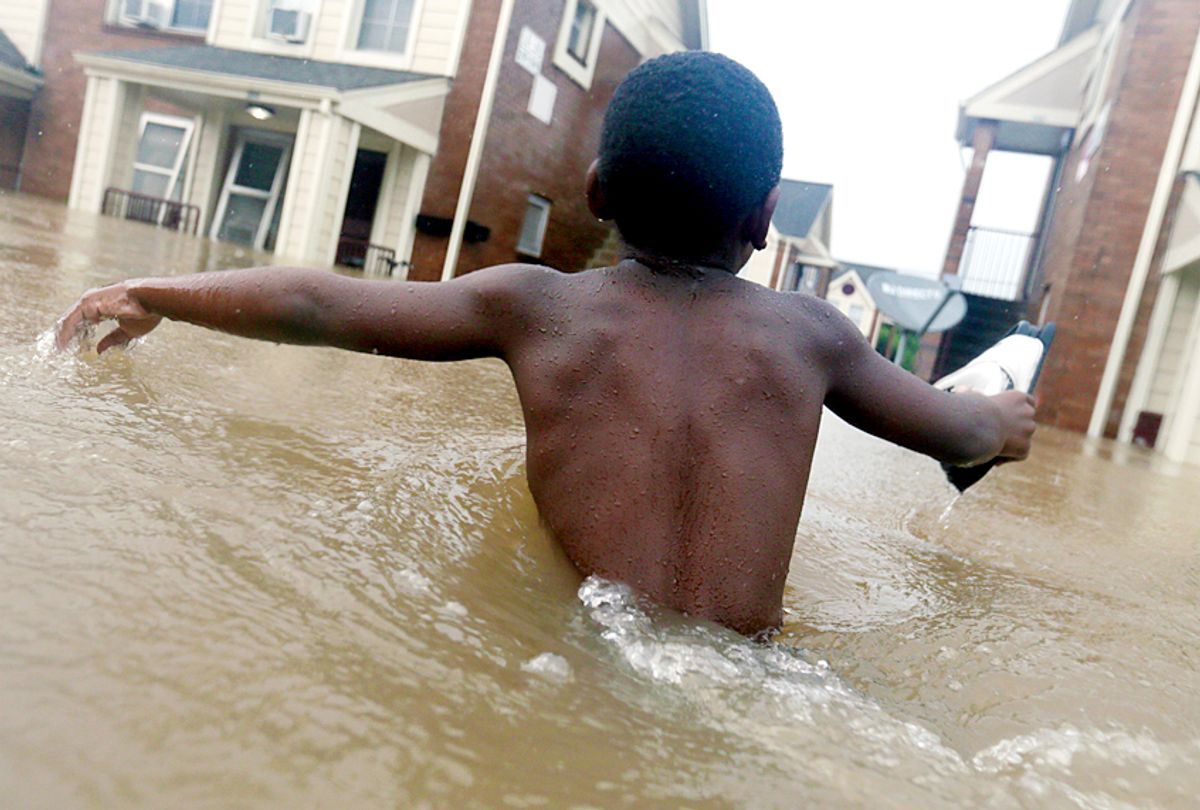 In the wake of last month's Hurricane Harvey, tests revealed that many of the homes on Briarhills Parkway — located in an upscale area a short drive out of Houston’s downtown — contained amounts of E. coli that were about four times higher than the levels that are considered as safe.

In the Clayton Homes lower-income public housing development close to the heart of the city, the levels of E. coli were 135 times higher than levels considered safe.

As discussed earlier this week on Salon, a New York Times investigation revealed that the floodwaters following the record-setting rains on the city were filled with toxins and bacteria such as Escherichia coli, lead, and arsenic as well as other heavy metals.

As it turns out, some of those noxious substances are distributed across the city unevenly, often in ways that closely mirror both class and racial lines.

The Times' investigation was conducted in two neighborhoods, one was described as "upscale" and the other was a low-income public housing development that's positioned alongside the Buffalo Bayou.

The Buffalo Bayou is a slow-moving river that "crosses from the Westside of Houston to the Eastside of Houston and then becomes the Houston Ship Channel as it empties out into Galveston Bay and the Gulf of Mexico," according to Bryan Parras, who helped form Texas Environmental Justice Advocacy Services (TEJAS), and spoke about the flooding on Democracy Now on August 28.  The bayou has long dealt with water quality issues and pollution.

"And my concern is, where I live, on the Eastside," Parras explained. "Because of the many, many petrochemical facilities, storage tanks and other hazardous sites that line that same bayou for 30, 40 miles."

The city of Houston has been described as the center of the nation's petrochemical industry. On Sept. 3, the Associated Press published an exclusive investigative report that detailed the flooding of many of Houston's Superfund sites, of which there are more than a dozen, and which have been "designated by the Environmental Protection Agency as being among America’s most intensely contaminated places."

The AP reported that "many are now flooded, with the risk that waters were stirring dangerous sediment." In hindsight, this was an evident foreshadowing of the Times' investigation.

Salon spoke with Yvette Arellano, a research fellow at TEJAS, who helped aid cleanup and recovery efforts in the Clayton Homes development, as well as other areas in Houston. She described the scene in Clayton Homes as "devastating," with water levels that were at least five feet deep.

Part of the reason problems were exacerbated as a result of the storm was because Houston has no zoning restrictions. "Houston is the largest city with no zoning in the entire nation, Pasadena is the second-largest, and these are home to this massive petrochemical complex and continuous efforts to, you know, expand the oil and gas refining and storage facilities."

In order to fix begin fixing these larger issues legislatively, Arellano says that the EPA needs to "assist in expediting" the "Risk Management Programs (RMP) rule Under the Clean Air Act." The rule "requires facilities that use extremely hazardous substances to develop a Risk Management Plan. These plans must be revised and resubmitted to EPA every five years." However, under the Trump administration, Scott Pruitt's EPA decided to delay the rule until February 2019, placing it under further review until then.

"If they're really taking this seriously than they would see this as a public health threat," Arellano told Salon.

But the larger issue at hand is environmental injustice, and the disproportionate impact that weather disasters have on low-income communities and communities of color.

"There's no doubt that the entire city of Houston suffers from some sort of environmental degradation; that's not our point," Arellano explained. "The point has always been that there are areas like these that suffer disproportionate impacts, they suffer disproportionately. So, yes, the entire city is affected, but to what extent? And who suffers more? And who has the resources to rebuild their lives? Who has the resources to make sure that the contamination or exposures that they're facing are addressed?"

There are multiple reasons for such disproportionate consequences in Houston, Arellano explained, which included neglect from state and local politicians because areas of low income and areas with public housing are seen as areas that don't vote.

"Folks see those areas as areas that don't vote or don't have enough political clout. They come from a very different tax bracket, so your local officials or state officials aren't going to vote in the interest of these populations because they already see those populations as not being active and not fighting back."

The reason they don't fight back at times, she explained, is because they can't. "How often do you get a chance to actually go to the voting booth whenever you're trying to hold down two jobs?"

But on the broader scale, she explained, cities like Houston are beholden to oil and gas industries "because they have multi-million dollar places of infrastructure that they've invested in and refuse to go back and spend just a little more money to update the facility.

"It costs less money to pay fines for any kind of pollution, whether it's air emissions — the smallest fine I've seen has been $3,000; you can't even by a car for $3,000," she explained. The industries however, she said, can pollute however many pounds they want.

"So while you have a more affluent community who might be afflicted with some of these contaminants at a lower level, they're going to go in to their doctor on their monthly visit or regular checks and have the resources to tell them 'you know this is an issue' . . . if something pops up," she explained. "Whereas in low-income, low-resourced, people of color communities — especially within these housing units that rely so much on federal assistance — those resources do not exist."

"The resources aren't the same, the impacts are not the same," she added. "This is where we talk about environmental justice, this is the entire crux of it."