Male entitlement in action: Why the Texas shooting is a gender issue 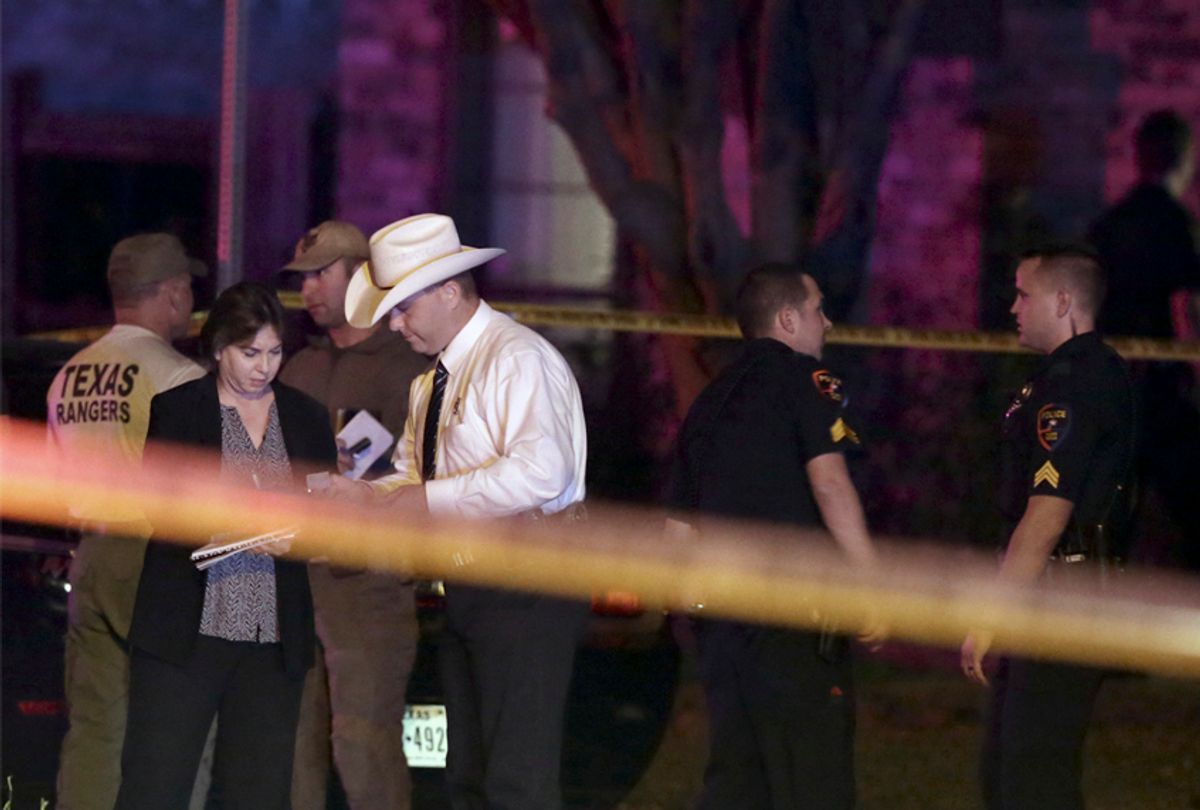 Law enforcement officers and investigators outside the scene of a shooting in Plano, Texas, Sept. 10, 2017. (AP/LM Otero)
--

It's a sad sign of the collective learned helplessness of Americans when it comes to gun violence that the recent shooting in Plano, Texas — which left nine people dead, including the shooter — has barely registered on the national consciousness. That the murderer was a domestic abuser who was motivated by rage at his wife for leaving him just adds to the collective national shrug. Sure, feminist journalists and bloggers will dutifully note the role that domestic violence plays in mass murders, but beyond that there's no larger discussion about why so many men get so resentful and angry at women that they lash out, often killing themselves and others in the process.

Instead, it often feels as if male violence against women is regarded like the weather: a natural phenomenon that is unfortunate but out of anyone's control. But this male rage is not inborn or natural. The idea that a woman owes you her life and her body, and that she has stolen something from you if she says no to you? That's a learned idea, something men pick up from the society around them.

Reading the CBS News coverage of the story, my heart broke to read that Debbie Lane, the mother of victim Meredith Hight, felt the need to justify her daughter's decision to break up with Spencer Hight, her estranged husband who went on to murder eight people.

“After two years of trying to get him in treatment, trying to get him to stop, trying to help him… she said, enough is enough. She made every effort she could … and could leave that relationship with no regrets," Lane told the local CBS outlet in Dallas.

It says a lot about how our society views heterosexual relationships that even when someone is murdered by her husband, her mother feels like she has to defend her daughter's right to end the marriage.

To be extremely clear, I'm not blaming Debbie Lane here for anything. Her comment just struck me because it reflects how much women are pressured and guilt-tripped into being with men and taking care of men, even if doing so comes at great personal cost. It's obvious why a mother would want people to understand that her murdered daughter was a good person. It's not her fault that "good person" is defined, in our culture, in terms of female self-sacrifice.

Whenever I hear a story about a man killing a woman for telling him no — and that's a story that happens about three times a day in this country — I can't help but think about what an unbelievable sense of entitlement the murderer must have to think he gets to snuff out a woman's life rather than accept her choice to say no. Most people struggle with rejection in life, and most people find a way to deal with it and move on. But there's a significant percentage of men who, on some level, don't accept a woman's right to say no.

Some have a mild case of entitlement, such as the man who got miffed the other day on the street when I pretended not to hear his "compliment" about my body. Some get more serious, stalking and harassing women who reject them. Some, about one man every eight hours on average in the United States, resort to killing.

Despite all this, there's still a widespread tendency to romanticize it when men reject women's rejections. For instance, there was a recent spate of news stories celebrating a man in Bristol, England, who set up a piano in a park and vowed to play until a woman he called his "Rapunzel" heard him out or took him back or somehow gave him the attention she was clearly unwilling to give.

“I know people in my situation will send flowers or text or write letters but that only ever seems to make things worse," he said. But even though it's completely obvious this stunt is a way to force a woman who is trying to get away to give him attention, much of the coverage portrayed him as "heartbroken," "romantic" and motivated by "lost love."

The good news is that a number of people on social media pushed back hard, noting that in fact it's creepy and abusive when someone refuses to take no for an answer, which finally caused this guy to give up. Half of the British public polled called the guy creepy, which shows serious progress in terms of identifying bad male behavior for what it is.

The lesson here, we may hope, is that this notion that men are entitled to women's affections is not actually etched into male DNA. Society matters, and if we decide to we can start treating male entitlement like the toxin it is. We don't need to badger women to "give him a chance" or "work on the relationship." We don't have to romanticize men who won't take no for an answer.

Again, male entitlement exists on a spectrum. Few men who get caught up in the idea that women owe them actually turn into killers, though unfortunately not few enough. But this entitlement is the root cause of a myriad of problems, not just for women, but for men who are given so much social permission to nurture unhealthy obsessions. It's about time we started pushing back.