There's no doubt Clinton was the victim of many sexist attacks. Does that mean that all criticism of her is sexist? 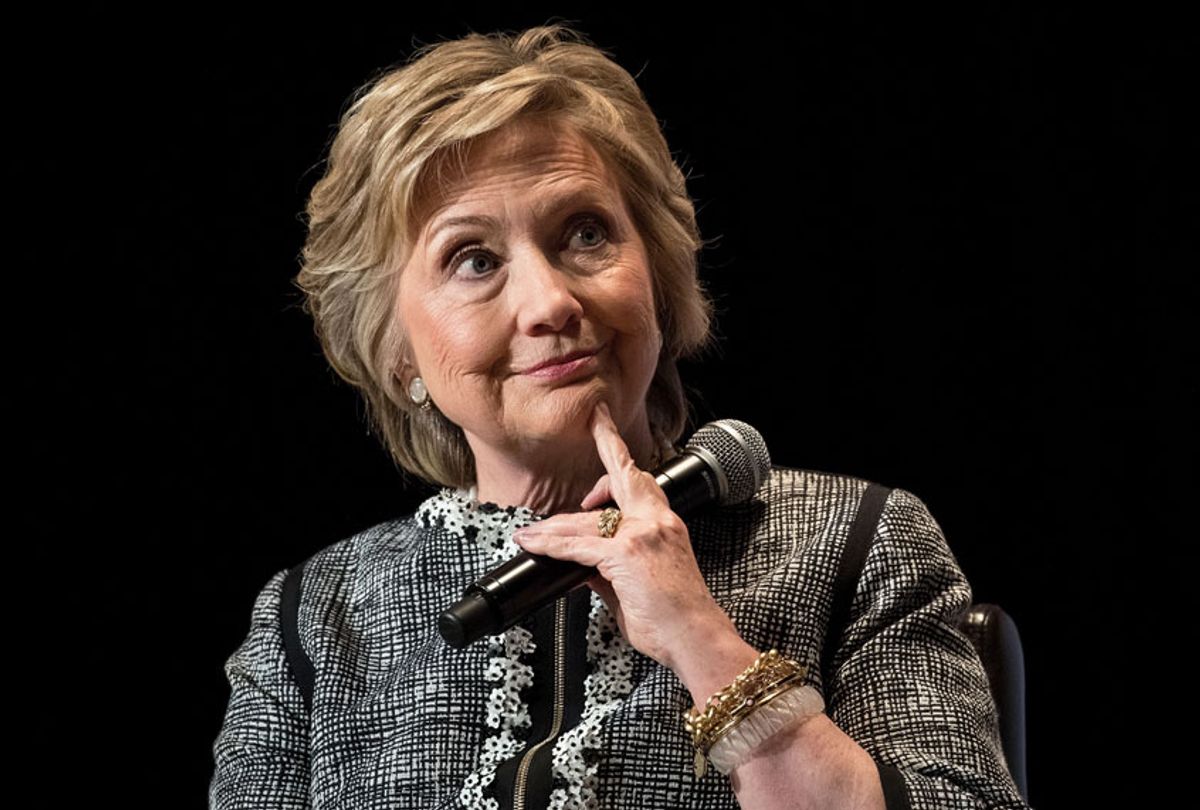 If Hillary Clinton were a man, would she be president today? At the end of the day, that is the core question that haunts her new book about her stunning loss in the 2016 election, “What Happened.” There is no question that Clinton suffered from both sexism and viciously misogynistic attacks, but what is less clear is whether the specific sexism and misogyny that Clinton suffered changed the outcome of the election.

There are two core questions: First, did Clinton lose because she was female? And second, did the nature of the campaign itself increase or activate sexism among voters? Clinton’s book seems to suggest that the answer to both questions is yes.

Unlike her run for the nomination in 2008, in 2016 the Clinton campaign specifically emphasized her role as a female candidate. She also had to contend with the aggressively hostile ways that Donald Trump and his supporters hurled sexist and misogynist epithets her way. From chants of “lock her up” to “nasty woman” to the various other ways that Trump displayed his disdain for women, the “woman card” was constantly in play.

But at times Clinton cast her role as a female candidate as a way to displace legitimate concerns that she was a Washington insider. Recall that in the first debate she responded to the question of being an insider by saying, “Well, I can’t think of anything more of an outsider than electing the first woman president, but I’m not just running because I would be the first woman president.”

Even outside the Republican National Convention there was a slew of merchandise for sale that was blatantly sexist. Tony Ensminger, a vendor from Cleveland Heights, said the viciously anti-Clinton goods tend to do well, because “nobody likes Hillary.” A big seller was the “Life’s a Bitch ― Don’t Vote for One” pin. “Even older women snicker at that,” Ensminger said. “They may not buy it, but they’ll laugh.”

There was no doubt that Clinton was the victim of a lot of sexist attacks, but does that mean that any criticism of Clinton is sexist?

That leads to the next feature of the paradox: How can we acknowledge the real and difficult ways that her gender shaped her candidacy while also talking about her flaws as a candidate?

The key problem is that Clinton and many of her supporters tend to code any and all critique of her as a candidate as misogynist. Take this recent response to the column I wrote last week about the leadership differences between Clinton and Sanders.

.@mcclennen65 You are entitled to your POV, but I have a request-pls attempt to curb your vitriolic misogyny as it only diminishes you! https://t.co/hQX0ucbeSz

The only way my piece could be described as an example of “vitriolic misogyny” is if any critique of Clinton is effectively an act of misogyny.

But if any critique of Clinton is an act of sexism or worse, then there is no way to discuss the actual merits of her as a candidate other than to gender them. If, for instance, some feel she should have been more open about her pneumonia, is that critique sexist? Or is it an example of a poorly run campaign? Is it fair to question her judgment over her private email server? Or is that sexist? Did Vladimir Putin purportedly target her because he hates women, or because he likes power? Would someone like Putin have gone after a Harold Clinton the same way as he would target a Hillary?

The piece of the story that really complicates this is the way that the Clinton campaign itself propagated myths like that of “Bernie bros” — the later version of “Obama boys.”  It also didn’t help when Gloria Steinem and Madeline Albright criticized any woman who was not a Clinton supporter. Albright went so far as to say that there was a “special place in Hell” for women who didn’t support Clinton.

The deep irony is that one of the most successful politicians in U.S. history, gender aside, has so often used sexism as a defense against her critics that she herself has shut down substantive policy conversations about her as a candidate. As Clinton herself puts it in her book, “I think there’s another explanation for the skepticism I’ve faced in public life. I think it’s partly because I’m a woman.”

But foregrounding the gender issue overshadows, for instance, reasonable conversations about her hawkish tendencies, her Washington insider status, her coziness with Wall Street, and her characterization of the policy platforms proposed by Sanders as unrealistic and impractical.

As a way of explaining the paradox of rejecting sexism but crying misogyny, let’s look at two of the reasons Clinton highlights for her loss — each of which she frames as sexist.

Take the case of her paid speeches for Wall Street — one of the key issues Sanders focused on in his campaign. For Sanders, the idea of receiving $250,000 for a paid speech to Wall Street suggested that Clinton would not be able to stand up to the corporate ruling class. Given that Sanders was a staunch opponent of Wall Street culture, Clinton’s speeches marked a clear line of difference between them as candidates.

This is a perfect example of how a clear and relevant political distinction between her candidacy and that of Sanders is coded as gendered. Clinton suggests that if she were male the issue of the speeches might not have been a big deal. What she misses, though, is that it was not just the high sum she received for the speeches or her reluctance to tell anyone what she said during those talks; it was specifically that the talks were to Wall Street bankers.

As John Sides, a professor of political science at George Washington University, puts it: the key question is whether Sanders would have gone after the speeches if they were given to a different group. The main target of the Sanders campaign was Wall Street, so highlighting Clinton’s seemingly close relationship with Wall Street was a logical step.

Clinton, though, refuses to read the issue of her Wall Street speeches as a legitimate campaign issue. Instead she suggests that any critique that Sanders launched was simply a character attack. “Because we agreed on so much, Bernie couldn’t make an argument against me in this area on policy, so he had to resort to innuendo and impugning my character.”

What Sanders saw as a policy issue, Clinton saw as a character attack.

The dismissal of Sanders as a legitimate candidate is everywhere in her book, but the key moment takes place when she suggests that the sexism of Sanders supporters cost her the election: “Some of his supporters . . . took to harassing my supporters online,” she writes. “It got ugly and more than a little sexist.” Such attacks, she argues, “caused lasting damage, making it harder to unify progressives in the general election and paving the way for Trump’s ‘Crooked Hillary’ campaign.”

According to Clinton the “Bernie bro” sexism helped Trump launch his sexist attacks. It also led directly to her loss because not all Sanders supporters ended up voting for her. Some actually voted for Trump.

It is true that some Sanders supporters voted for Trump, but that is not the whole story. As Sides points out in a piece for the Washington Post, three surveys suggest that between 6 and 12 percent of Sanders voters voted for Trump.

If we were to take that data alone and add it to the “Bernie bro” myth, then we would seem to have indisputable evidence to support Clinton’s argument that she lost due to sexism. The problem, though, is that throughout the history of collecting data from primaries to the general election it is generally true that the party nominee does not get all of the votes from that party’s primary candidates.

So there was never any reason for Clinton to expect to bag all of Sanders' voters. And it was no surprise, based on the various ways that she alienated his supporters during the primary, that some would choose to support someone else.

But there’s more. While Clinton focuses on votes lost, she fails to notice votes gained.

While she didn’t get all of the Sanders supporter votes, she did get a whole lot of votes from folks who had originally backed a GOP candidate but did not vote for Trump. According to Sides, “Of those people who as of July 2016 reported voting for a candidate other than Trump in the Republican primary, 69 percent reported voting for Trump in the general election, 14 percent voted for Clinton, and the rest voted for another candidate or said they did not vote.” Clinton got 3 percent of those who had supported Ted Cruz, 10 percent of Marco Rubio supporters, and a whopping 32 percent of those who had backed Kasich.

What makes this omission in Clinton’s math even more glaring is the fact that, according to a YouGov survey cited by Sides, in 2008, 24 percent of people who supported Clinton in the primary reported voting for McCain in the general.

That means that if we were to follow the logic that it is the candidate’s job to encourage voters to support the party, then Sanders did a far better job of convincing his voters to back the party candidate than Clinton herself did in 2008. That certainly sounds like a lot of party loyalty for a candidate Clinton describes as “disruptive” to the Democrats.

But here’s the real catch. As Clinton blames Sanders for disrupting the party and causing “lasting damage” to her campaign she fails to notice the various advantages she had. From her biased treatment by the DNC to the superdelegates to her $150 million war chest (twice Trump’s) to the backing of mega-stars from Bruce Springsteen to Beyoncé to Oprah to her massive list of media endorsements, Clinton had plenty of support. She had more endorsements from newspapers than either Reagan or Obama.

This brings me back to the paradox. There is no doubt that Trump ran a sexist campaign, but that doesn’t mean that the Sanders campaign was sexist too. And there is no doubt that some of those who voted for Trump are sexist, but not all of them are.  In fact, Emily Ekins identifies five distinct types of Trump voters.

Even more, the Sanders campaign did not cause Trump’s bullying. As Seth Meyers put it “Hey, Hillary Clinton, don’t blame Bernie because Donald Trump called you names. I promise you he was going to do that anyway. It’s not like Trump watched Bernie at the debates and thought, ‘Criticizing Hillary . . . that just might work! You think Trump needed Bernie’s permission to be an asshole?” he asked. “Assholes don’t need permission. That’s what makes them assholes.”

It can’t be said enough: Trump was not just — to borrow Meyers' word — an asshole; he was a sexist asshole. But that doesn’t mean he wouldn’t have gone after Clinton with the same amount of tenacity if she were a man. All we need to do is ask “little Marco” or “low energy Jeb.”

Being critical of Clinton is not the same as saying she needs to shut up, nor does it mean that I hate women. But the inability to have this conversation may explain why she lost.