In attacking overtime pay, Trump Is hurting his biggest fans

As the Trump administration rolls back Obama era regulations, he may be rolling over supporters 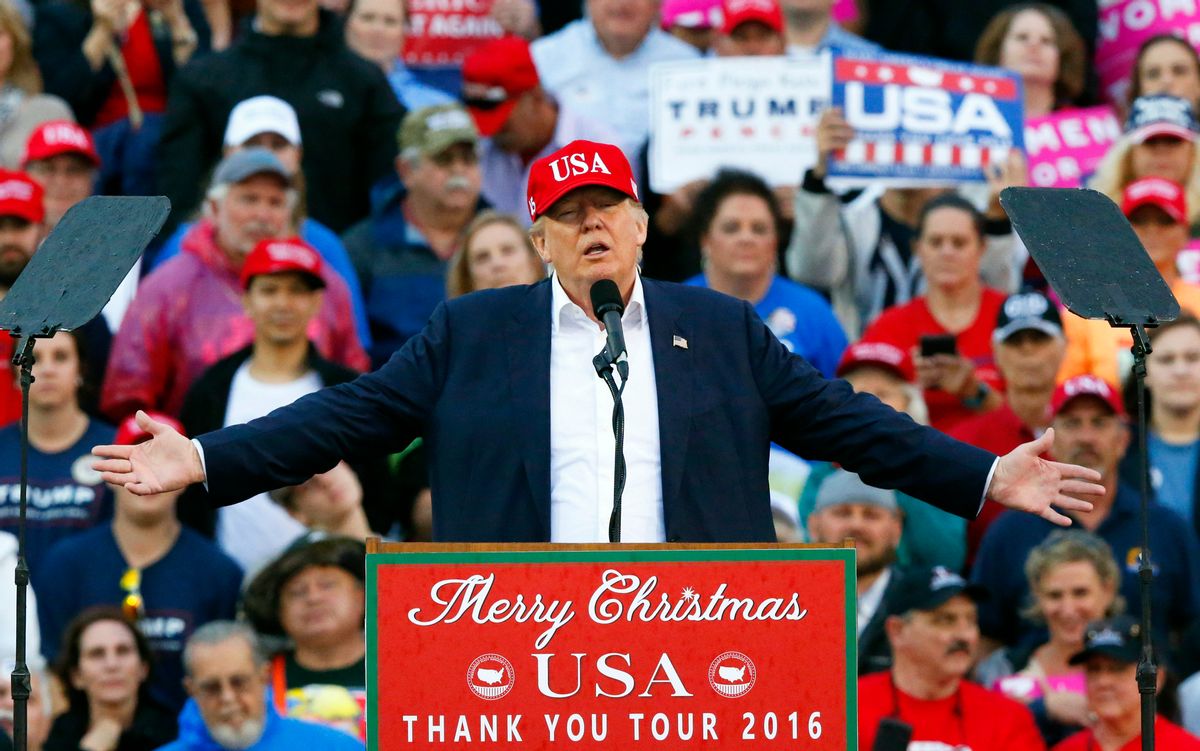 This article originally appeared on Truthout

The Trump administration has canceled hundreds of Obama-era regulations since taking power. Now, it's taking aim at the former president's signature piece of labor legislation.

In 1975, Gerald Ford set the income threshold above which employees could be exempt from overtime to around $58,000 in today's dollars, but this number was never updated to reflect inflation or wage growth. That means the number is now $23,660. In May 2016 Obama announced that he was doubling the annual salary threshold to $47,476, effectively giving millions of salaried employees making less than that a raise. Obama's move was hardly radical. In fact, it wasn't even as progressive as Ford's. The new rule would have covered 34 percent of full-time salaried workers in the United States; in the 1970s, 50 percent of them were covered. Nonetheless, according to the Department of Labor (DOL), it was poised to raise wages for an estimated 4.2 million workers.

This modest update was predictably greeted with outrage from GOP lawmakers and business leaders. "This change is another example of the administration being completely divorced from reality and adding more burdens to employers and expecting them to just absorb the impact," said Randy Johnson, the Chamber of Commerce's senior vice president of labor, immigration and employee benefits. Twenty-one state attorneys and dozens of business groups sued to overturn the new rule, and it was blocked on procedural grounds by a federal judge in Texas last November. The Obama administration appealed the decision but was unable to clear up the issue before leaving office. Now the rule's future rests with the anti-labor forces of the Trump administration.

In July, Trump's Labor Department called for public comments on the rule — a first step toward rolling it back or rewriting it. This move comes despite the fact that the Obama administration reviewed 300,000 comments before coming up with its salary threshold number. "The Labor Department's decision to revisit and likely revise the overtime rule is a slap in the face to millions of workers all across America who have waited long enough to be paid fairly for their overtime hours," said National Employment Law Project executive director Christine Owens after the announcement. "Taking away overtime pay is no way to make America great again or benefit working people, as the president had promised in his inaugural address."

Eric, a former fast food general manager in Texas who asked to keep his last name private, told Truthout that his company tried to subvert the law before it went into effect by switching multiple salaried employees to an hourly rate and telling them their pay rate would remain the same.

Although he thought the law was needed, he said that his company's goal seemed to be to "find ways around it while being technically in compliance." Eric said that, while salaried, he would make $37,500 while often working 75 hours a week.

Did the rule prompt many businesses to alter how they paid employees, like it did with Eric's? Heidi Shierholz, senior economist and director of policy at the Economic Policy Institute (EPI), told Truthout that there hadn't been a measurable surge in such cases, and also pointed out that businesses weren't exactly being truthful if they were using the rule as a justification for paying workers less.

"A key reason [we haven't seen a surge is because] there is no need to convert people to hourly, even if they are newly overtime eligible," she said. "You don't have to be hourly to collect overtime, salaried workers can get it, too. And the empirical literature on this finds that on net, workers will get higher pay as a result of the rule."

In fact, many businesses seemed to prepare for the overtime rule by giving their employees a raise, assuming they'd be on the hook for more money after the law took effect. PayScale research from 2016 found a considerable drop in the number of workers making less than $47,476. This means some workers can thank the overtime rule for a pay increase even though it never became a reality.

John, an employee at a Maryland research group who also asked to keep his last name private, told Truthout that he works with people who make $44,000 a year but clock considerable amounts of unpaid overtime regularly. During federal contract season, he said it was not uncommon for these employees to work between 50 and 70 hours.

Who would have benefitted from the overtime rule the most?

According to a technical paper produced by EPI months before Trump was elected, the overtime rule would have had an even bigger impact than the DOL assumed. While the DOL assessment estimated that 4.2 million workers would see a raise, EPI thinks the number would have been closer to 12.5 million. That's because, according to the EPI, the DOL relied on statistics from the late 1990s and didn't account for overtime changes that were made by the Bush administration in 2004 — changes that effectively did away with many workers' overtime protections.

That same paper also estimates the range of workers that the rule would have benefited: 6.4 million women, 4.2 million parents (and, by extension, 7.3 million children), 1.5 million African Americans, 2.0 million Latinos and 4.5 million millennials.

Additionally, we have a good idea of where the majority of the people who'd benefit from the rule live: "Trump Country."

Although many Americans think of Republican stronghold states as rabidly pro-Trump, it's important to make some distinctions. The phenomenon of the "Trump voter" has consistently obsessed the mainstream media since his victory, but much of the analysis falls back on broad assumptions about the "white working class." This narrative views Trump's ascent as the byproduct of poor white anger; a movement comprised of individuals from decaying areas wracked by factory closings and drug addiction. In fact, Trump himself seems to believe that this is who sent him to the White House. In a recent phone conversation, he told Mexican President Enrique Peña Nieto, "I won New Hampshire because New Hampshire is a drug-infested den."

There's a major problem with this explanation: the numbers simply don't add up. A FiveThirtyEight study from last May revealed that "the median household income of a Trump voter so far in the primaries is about $72,000," compared to a median income of around $61,000 for Clinton and Sanders supporters. The national median household income is around $56,000. "Trump's real base, the actual backbone of fascism, isn't poor and working-class voters," wrote Jesse Myerson in The Nation, "but middle-class and affluent whites."

This fact hasn't exactly curbed the Trump administration's populist rhetoric or its feigned concern for the downtrodden. During his Senate hearing, Trump's Labor Secretary Alexander Acosta was questioned about the rule by Washington Senator Patty Murray. Acosta told Murray, "We now see an update that is a very large revision and something that needs to be considered is the impact it has on the economy, on nonprofits, on geographic areas that have lower wages."

According to EPI, those are precisely the places where the overtime rule would have its biggest impact. "The Obama overtime rule would have provided crucial protections to workers across the entire country. But workers in some states would be more likely to benefit than others," EPI's Shierholz told Truthout. "In particular, in poorer states, salaried, white collar workers are more likely to earn below the salary threshold than in richer states. In other words, workers in states with the lowest wages would have benefited the most from the rule." This means that in addition to poor people getting a boost from the Obama overtime rule, middle-class Trump voters would specifically see a pay bump too.

The state receiving the biggest economic boost would have been West Virginia, where 30.7 percent of its salaried workers would have begun to see overtime pay. According to a recent WalletHub study, West Virginia currently has the worst economy in the entire country. Many states that decisively backed Trump in the last election would have seen a similar statistical impact. These include Tennessee, Georgia, Arkansas, Idaho and South Carolina.

Despite his promise to "drain the swamp," it's clear that Trump is pushing the same methods of economic warfare that we've come to expect from the GOP. Axing the overtime rule is simply the latest example of this administration making life worse for most of the country, including the parts it claims to represent.